The 22 types of family members at a braai 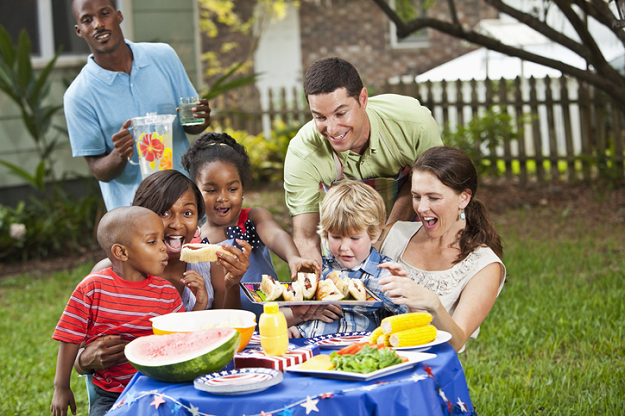 Summertime is in full swing, which means braais, braais and guess what? More braais.

This is based on the premise that everyone loves braais as much as I do, which I'm hoping is true.

There are always some interesting and peculiar folk at these events though, and I'm sure you may know a few, or be a few of them.

Different types of people at braais:

There's always that one aunty that makes the meanest potato salad in all of the land and is required to make one for every braai, or else it just wouldn’t be the same. Faces usually light up when this family member arrives, but mostly for the potato salad. No salad, no entry.

The “my son” aunty

You’ll most likely come across an aunty who thinks her son is the most wonderful thing to grace the surface of this Earth (although it is kind of precious to witness). She’ll bring her son and his accomplishments up in conversation at every chance she gets.

"So I was drinking water and m-"

"Water? Oh, my son drinks water. He started his own NGO that purifies water and replenishes orphaned children in Cambodia.”

Did we ask, aunty?

The guest who rocks up to the party with chicken they just brought in a Spar packet and didn’t bother to marinade or spice it yet. (Don't be this guest).

By some miracle, this guy actually bothered to show up to the braai despite his favourite sports team playing at the same time. He’ll insist that you keep the sports channel on so he can catch glimpses of the game though, who cares what anyone else was watching?

If you hear random screams or cheers, it’s most likely coming from this guy because someone scored a try or whatever.

The cool uncle is great with kids and will play all the games with them. He is the friendly uncle who doesn’t stop smiling and all the little ones gravitate towards him.

The all-talk braai master who swears they'll do all the braaing but gets distracted and leaves it to someone else who is far less willing.

This uncle just tries way too hard and probably pulled up in his low-top Nike Air Force 1s as an attempt to "hang with the cool kids". He uses words like "lit" but way out of context. He means well though.

It doesn’t matter how stuffed you may be, there will always be an aunty who insists that you have more. She’ll say, "You’re getting skinny" even though you know you are a bit more plump than usual. No one can be too sure why she’s trying to stuff everyone, but it’s kind of endearing.

She'll also insist you pack in some food to take home even though you're in a hurry and already halfway out the door.

That one obnoxious guy who just got back from Portugal or something and won’t shut up about it. Very likely that he could be the son of the “my son” aunty.

If you tell him you went to the beach he’ll say “the beaches in Portugal are so much better than that”. Criticises pretty much everything you do or have.

There’s always that one person who won’t eat the potato salad because it wasn’t made from almond milk or something. They'll even give you the evil eye for dishing from the bowl. Only speaks gluten-free, sorry.

This kind of person will see the ratio of people to garlic roll and insist on taking three whole pieces regardless. I mean, you can’t blame them but the people in the back are trying to get a taste too (I say this very hypocritically).

There’s usually that one person that stresses way too much for a simple family braai and makes it a whole lot more complicated than it needs to be.

Relax, if the serviettes run out we'll just use your tablecloth.

It doesn’t matter where this family member is, they’ll be glued to their phone like they had it surgically attached. You’ll wonder where on Earth they get all their battery power from. They definitely have a charger in their bag, just in case.

This family member will say, “I haven’t seen you in forever!” but is blind to fact that it was a tactical choice you've made. They’ll ask you questions that are way too personal and borderline uncomfortable. Thank you, next.

You’ve got to keep an eye on this uncle. He’ll start slurring his words and almost fall over on his lawn chair. He might start blabbering on about his youth and his wife won’t come over to save you because she specifically told him not to drink too much before they arrived.

The “come let’s take a photo for WhatsUpp” aunty

This Aunty just discovered how to make a WhatsApp story and has been unstoppable ever since. She’ll probably harass everyone to take pictures only to end up with a few blurry ones. She'll treasure them forever though.

The guest who wears their Zara pants when it’s clearly a Mr Price kind of day. Will still complain like it’s your fault when they get a drop of marinade on it.

The cousin that never shows up for the family gatherings because they have "work" or "studies" even though you saw they’re out with their friends on their Instagram stories.

This cousin is present throughout the braai but is conveniently nowhere to be found when it's clean-up time.

Some of our lovely readers shared a few family members they witness at their braais:

"A couple that arrives with exactly 2 chicken sosaties to braai and a green salad the size of a side plate, because they are 'on a diet'. They then proceed to eat whatever steak, chops and wors is on offer, no matter whose meat it is, and will happily take home leftover food from the kitchen. We have a couple like this in our family."

"You prepare a dish at a braai (a new recipe) where she is present. She will insist on getting the recipe which is not a problem, I don't mind sharing. The next time at a braai, she will broadcast, 'please try my new dish it is divine'."

"A cousin that arrives with a small piece of wors to braai and no beers. He offers to braai then eats meat from the braai as the meat is cooking. He then proceeds to help himself to the beers in the fridge that he did not bring. We have learnt now we bring our drinks in cooler boxes and keep them next to our chairs and don't allow him to braai."

Which braai person are you? What other types of people do you witness at braais?

This Christmas tell your children the real Santa Claus story