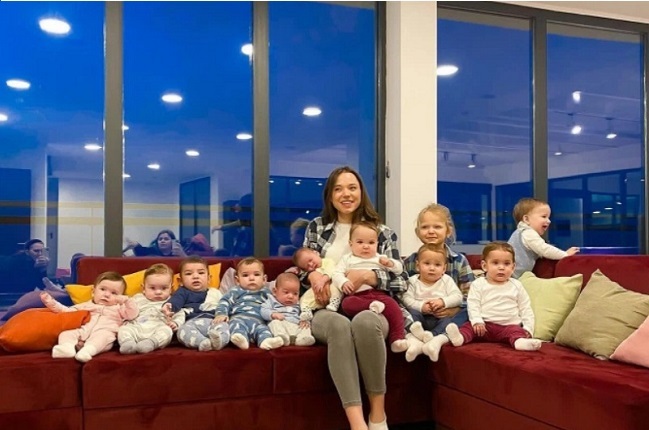 Christina says that she does not know how many children there will be but she is not planning to stop at 10. Photo: Newsflash Media/ @Batumi_ mama

A twenty-three-year old Russian mom from Moscow is raising 11 kids, one of which is biologically hers, and ten more conceived via a surrogate.

Christina was a single mom when she met her fifty-six-year old millionaire husband six years ago.

Currently, the couple is raising their 11 children and hopes to have a dozen more using surrogate mothers.

A hundred babies, a million dollars?

The millionaire couple revealed on social media that they have discussed having 105 children, but they admit that this was just a random number.

Christina told Newsflash Media that she does not know how many children there will be, but she is not planning to stop at ten.

"We just not ready to talk about the final number," revealed the baby-mad mom.

Christina explained to Newsflash Media that she gave birth to her eldest daughter Vika six years ago.

The rest of the children are genetically theirs, as they were carried through the use of surrogates.

The couple lives in the coastal town of Batumi in Georgia where it is legal to use surrogate mothers in pregnancy, each of which cost around 8,000 euros, or over R140 000.

Christina explains that the clinic in Batumi, where they live, chooses the surrogate mothers for them and takes full responsibility for the process.

"We are not personally acquainted with surrogate mothers and do not have direct contacts with them in order to avoid problems after pregnancy," she explained.

However, Christina likes to have control over what the surrogates eat by coming up with diet and nutrition plans for the pregnant surrogates.

Christina explains that counselling and legal paperwork are essential for the surrogates who carry the babies.

If Christina wants to reach her goal at 30, while Gulip is 66, she would have to have her surrogates successfully conceive 12 babies each year for seven years.

Watch the cute video of Christina and her 11 children below:

We live in a world where facts and fiction get blurred
In times of uncertainty you need journalism you can trust. For 14 free days, you can have access to a world of in-depth analyses, investigative journalism, top opinions and a range of features. Journalism strengthens democracy. Invest in the future today. Thereafter you will be billed R75 per month. You can cancel anytime and if you cancel within 14 days you won't be billed.
Subscribe to News24
Related Links
WATCH | Girl with uncombable hair syndrome learns to love unruly locks
WATCH | Duchess Kate and Prince William are considering baby no.4
WATCH | Dad spent six years building a 'Cool Runnings' bobsled track in his backyard for his family
Next on Parent24
Got an excitable kid like Prince Louis? Here's how to keep a child calm at family celebrations

Read more on:
cute
Events
Locals encouraged to tell their homegrown stories to ignite a love for reading