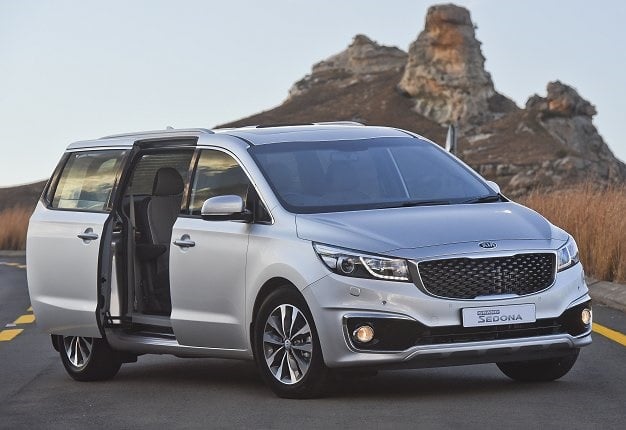 <b>PREMIUM KIA LEADS THE WAY: </b> Kia has grown up and carries a more sophisticated, stylish line-up. The latest model to display automaker's new style is its largest SUV in SA - the Grand Sedona. <i>Image: Quickpic</i>

If there’s one thing any parent needs with a growing family, or even one spouting offspring, it’s boot space and a lot of it.

One night away does not mean just one overnight bag either. There are loads of toys, extra clothes, snacks and copious amounts of unnecessary stuff that gets taken along.

Since children need to be safely secured in child seats, ease of ingress is vital, especially with toddlers who try and refrain from being strapped in. A simple answer to this is sliding doors, and those that open and close at a touch of a button are heaven sent, such as bigger vans like a Mercedes-Benz Vito.

We take a look at five of the most practical or spacious cars available in the market to suit various pockets.

The Nissan Patrol was launched back in 2010, but it has only reached local shores towards the end of 2017. There’s only one derivative available with a 5.6-litre V8 engine, but it’s a glorious vehicle for kids and parents, even if it costs a whopping R1.3 million. It also has a 140-litre fuel tank, so having a petrol pump in your backyard would be a blessing.

With all that said, it’s extremely practical and spacious. It has side steps so getting in and out is easy, and it also has a grab handle inside the door frame to help you climb in easily. I recently had to drive to Standford – about two hours outside Cape Town – for a rugby game and we were blessed with some heavy rain while field side. Our little family of 3 comfortably climbed into the boot with the third row of seats folded flat to watch the game, much to our toddler’s delight. She thought it was a grand place to play house!

The #Nissan #Patrol styling might look unobtrusive, but it's sheer size makes its design irrelevant. Under the bonnet there's a #V8 5.6-litre engine delivering 298kW/560Nm. Despite its mammoth size, it floats like a butterfly when cruising on the long road, but give it some throttle and you unleash the calm beast... . . . . #carsofinstagram #carstagram #SUV #SUVstagram #instadaily #instacars #wheels24testcar #wheels24garage #instapic #nissansa #roadtrip #lovemyjob

The Sedona is one of the most practical vehicles you can find. Pricey perhaps, but it’s everything a large family might need. It has seating for up to eight people, sliding passenger doors on both sides of the car and even with the all three rows of seats up, there’s still enough room left in the boot.

Car seats take up extra room and a vehicle like this means you won’t have a problem getting in your twins and the older kids in their booster seats. It’s extremely comfortable too. Accessing the third row of seats is probably the simplest compared to any other seven-seater as the second row of seats fold straight up.

There is nothing more practical than a bakkie, and many South African families can attest to this. It makes for a great all-round vehicle.

The 2.5-litre engine is good for 100kW and 320Nm and whether you’re packing the loadbay or trying out its 3500kg towing capacity, the KB 250 X-Rider is as great a workhorse as it is a comfortable daily-drive for a young family. It’s very roomy in the rear and rather plush for a bakkie. It’s simple and unpretentious and only uses a claimed 7.7-litres per 100km.

So many things to love about this #Isuzu #kb #hirider #bakkie. It's unpretentious, a workhorse and pretty comfy too. And, I think it's a looker too! Not to mention a load bay big enough to get some feed for the animals. . . . . #bakkiesofinstagram #bakkiegram #instabakkie #pickup #isuzusa #lovemyjob #giraffehouse #wheels24testcar #wheels24garage #instadaily #carsofinstagram #redcar

The Corolla is another one of SA’s most loved cars with a rich heritage spanning 11 generations over 50 years. The doors open nice and wide, it has loads of legroom and headroom, and it’s comfortable.

It is reliable and favourably fuel efficient with a claimed combined fuel consumption of only 6.0-litres/100km by the automaker. I have a 1998 model year Corolla and even though that model is 20 years old, its characteristics are the same. What I love most about my old car is the enormous boot and the modern version is even better with 452 litres of luggage space – and that’s without the rear seats being folded flat.

This little car might come as a huge surprise on this list, but it blew me away in terms of its practicality. The 1.2-litre engine is mated to a six-speed manual gearbox. Despite its small size, the crossover vehicle can even go off-roading. You can change driving modes by flicking a dial next to the gear lever.

You might not be able to fit a lanky adult in the rear, but there’s more than enough room for the kids. Its most charming feature is its relatively spacious boot for a little car. Because it has a space-saving spare wheel below the car, it frees up more room. With the Western Cape suffering a water crisis, collecting water from water points and storing it in the boot of a Panda would be unheard of. However, it's capable of holding about 20 5-litre water bottles along with a 25-litre bucket. Now isn’t that a treat?

The #Fiat #Panda #Cross is a little gem of a car. Naturally it's compact, but I'm surprised at the volume of its boot. It held about 20 x 5litre bottles, a bucket and there was room for a lot more. With the #watercrisis in #CapeTown, boot space is essential when collecting water from a borehole. . . . . #carsofinstagram #carstagram #carporn #wheels24testcar #wheels24garage #humanitariancrisis #instadaily #iegers #compactSUV

What is your favourite family car, big enough to fit the kids, their car seats and their small army of bags yet nippy enough for the school run? Comment below or send to chatback@parent24.com and we may publish your letters.

We live in a world where facts and fiction get blurred
In times of uncertainty you need journalism you can trust. For only R75 per month, you have access to a world of in-depth analyses, investigative journalism, top opinions and a range of features. Journalism strengthens democracy. Invest in the future today.
Subscribe to News24
Next on Parent24
Now it's even easier to let your kid ride Shotgun on that mountain bike training ride