Blake Lively may be ready for baby No.3 but are you? 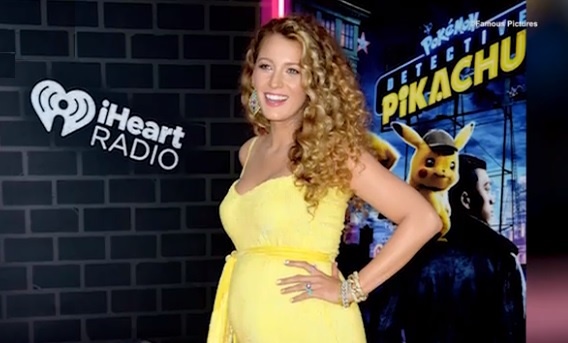 "I’m one of five kids. My husband is one of four, so we’re officially breeders."

Why bother with an announcement when you can let your bump do the talking?

That's what former Gossip Girl actress Blake Lively did this week past while attending the premiere of the movie Pokemon Detective Pikachu alongside hubby Ryan Reynolds, who lends his voice as the film's title character. The soon-to-be mom of three took to the red carpet casually displaying a rather obvious baby bump but has yet to release an official statement to confirm her pregnancy, which, given her two previous pregnancies, we doubt is on the way.

When it comes to their children, daughters, James (4) and Inez (2), the pair have been notoriously private, only appearing with their toddlers on the red carpet once in 2016.

What the couple have not been shy about sharing is the number of children they want to have.

"I’m one of five kids. My husband is one of four, so we’re officially breeders," Blake said jokingly in a 2016 interview with the TODAY Show.

Also see: When parents play favourites, what happens to the kids?

Are you having a third baby? What's been going through your mind? What advice have you been given? Tell us and we could publish your mail. Anonymous contributions are welcome.

Given their experience growing up in large families, we're sure  Blake and Ryan have some idea of what to expect when their third child arrives.

But if you find yourself embarking on a similar journey with no idea what you're getting yourself into, we've got you covered.

Chat to any mom of three and you're most likely to get bittersweet responses.

We've heard some say 'Its the best thing that's happened to our family', "I couldn't wait for their teen years to hit', 'It's hectic but fun, our kids are best friends' and 'By the time the third one comes around, you're basically an expert'.

Local author, blogger and father of three, James Fouche describes it as "playing checkers with chess pieces" and warns that you may start to "imagine people whispering behind cupped hands when you enter the building with your horde. It feels like you are in danger of becoming a baby factory."

Scary as it sounds, James says that the silver lining is that "the benefits far outweigh the negatives."

Also see: The science behind the power of sibling bonds

"It will all work out"

As most parents do when looking for advice, we took to internet parenting forums and found one father, user Mildlygifted, requesting advice on welcoming his third child via Reddit's r/Parenting community.

In need of guidance, "terrified" and "having trouble sleeping at night," the dad was given much-needed reassurance and advice.

"It’s all about your mindset"

"The 3rd kid is the wild card"

"It will all work out"

Are you having a third baby? What's been going through your mind? What advice have you been given? Tell us and we could publish your mail. Anonymous contributions are welcome.

We live in a world where facts and fiction get blurred
In times of uncertainty you need journalism you can trust. For 14 free days, you can have access to a world of in-depth analyses, investigative journalism, top opinions and a range of features. Journalism strengthens democracy. Invest in the future today. Thereafter you will be billed R75 per month. You can cancel anytime and if you cancel within 14 days you won't be billed.
Subscribe to News24
Related Links
Parents announce 5th pregnancy with funny Grease spoof
Best pregnancy announcement ever!
Supermodel’s nude pregnancy announcement
Next on Parent24
FEEL GOOD | 'I finally have my arms around my son': Mom reunites with her son after 40 years apart