Couple with Dwarfism talk about raising one daughter with the disease, and one without Proud mum-of-two Alyssa Biddle, 29, and her fiancé Jonathon Tripp, 40, were both born with a slightly different type of dwarfism, which has been passed down to their eldest daughter Sienna, three.

The couple from Melbourne, Victoria, Australia, said were over the moon after welcoming their youngest daughter Bonnie, now 22 months, in July 2018 – completing the family they had always dreamed of.

But mum Alyssa has revealed that when she is out and about, she is questioned by strangers sometimes up to 'five times a day' about whether her two adorable girls are related because Bonnie was not born with dwarfism. Now she is sharing her story to help raise awareness and to break down misconceptions surrounding dwarfism – while also wanting to inspire young people who have the condition.

Stay-at-home mum Alyssa said: "We couldn't be happier with our beautiful family. I have always dreamed of having kids, and Jonathon was definitely born to be a dad. "It was very exciting when I got pregnant, we were so happy. Jonathan is a very fun father and absolutely loves every minute of it.

"When we go out together, I can see that some people do stare at us as obviously, we look a bit different from some other families. "I get asked every day if the girls are related. Obviously as Sienna has dwarfism, and Bonnie does not, you can tell that people have questions.

"People often think they're twins because of their size and because they both have blonde hair. But in reality, Sienna is two years older than Bonnie. "It can be up to five times a day that people will ask about them. If they don't think they're twins, they'll often assume Bonnie is a friend or cousin.

"It doesn't bother me at all though when people ask questions, I find it quite funny. I'm all for those conversations and having the opportunity to raise awareness."

Alyssa, who was born in South Africa and immigrated to Australia when she was 13, met purchasing manager Jonathan back in 2009 at a convention for short-statured people.

She explained that the pair remained friends for many years before starting a romantic relationship – and Alyssa was overjoyed when he popped the question in January this year.

The mum added that while she and Sienna have a type of dwarfism known as Acondroplaysia, Jonathan was born with another type called Hyrpocondroplaysia. 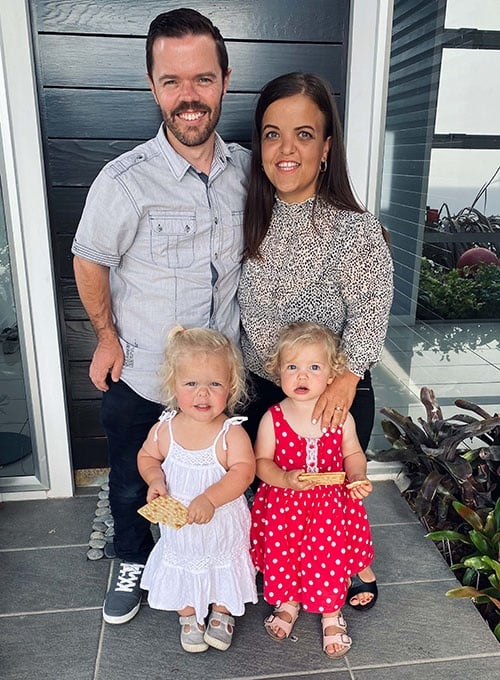 While very similar, Alyssa explained that the only difference between the types is that people with Hyrpocondroplaysia are usually slightly more proportionate.

She said: "Jonathon and I were on totally different paths at that point in our lives when we met, and we were friends for a very long time before becoming a couple.

"Both of us had pretty good experiences growing up. I have a very thick skin, so nothing really bothered me that much, even if some kids would say mean things.

"I never really saw other people like myself. It's so different now with the internet, kids can connect with other kids who are like them and feel less alone.

"I only had one friend as a child who was short-statured, who I saw a few times a year, but that was about it.

"It wasn't until I was 18 that I was really exposed to other people with the same condition.

"I went to a convention for the short-statured people of Australia, which was wonderful. That's where I meant Jonathon."

Alyssa is sharing her story to help raise awareness of dwarfism while also proving that the condition does not define her or her family. She also hopes to inspire other young people with dwarfism that might feel uncertain about their future.

The mum added: "The main thing I want to get across is that we are really no different to anyone else. "Dwarfism doesn't define a person. There are short-statured people who are doctors, lawyers and are in all sorts of different professions.

"I think there are quite a lot of misconceptions out there. I haven't experienced anything too negative personally in regards to me and Jonathon having children.

"But I have seen it happen to other parents with dwarfism, who have received comments basically saying that short-statured people should not have children. It's really awful.

"The most important thing is that a child is taken care of and loved. That is all that matters.

"I can't wait to see my girls grow up together. They're already so close, and I think they'll be best friends for life."

We live in a world where facts and fiction get blurred
In times of uncertainty you need journalism you can trust. For 14 free days, you can have access to a world of in-depth analyses, investigative journalism, top opinions and a range of features. Journalism strengthens democracy. Invest in the future today. Thereafter you will be billed R75 per month. You can cancel anytime and if you cancel within 14 days you won't be billed.
Subscribe to News24
Related Links
‘What I’ve learnt from having a child born with Down Syndrome’
How a black family raising a white baby is bringing awareness to cross-racial adoption
SA family with dwarfism: "Height doesn’t matter – what counts is your heart"
Next on Parent24
#NoOneWins: Everything you need to know about Parental Alienation