‘My partners are extremely supportive’: what it’s like raising children in a polyamorous relationship 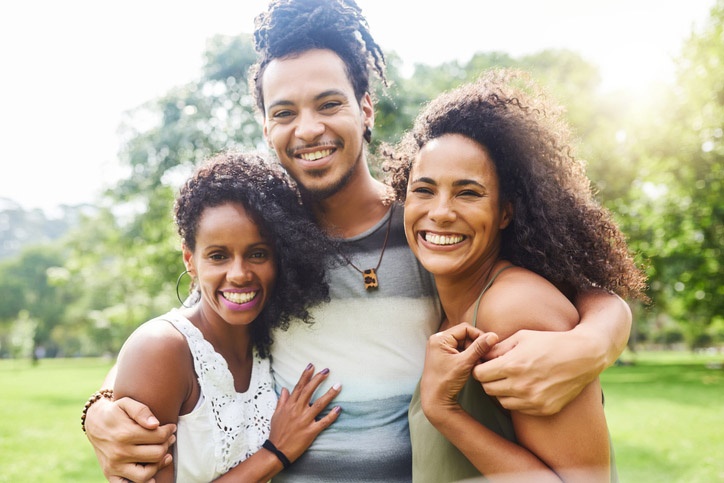 “I am currently in 5 relationships. I didn't set out to be in this many, but things often start out casual and then I catch feelings.”

“I am currently in 5 relationships,” says Rebecca, a 31-year-old mother of a six-month-old baby.  “I didn't set out to be in this many, but things often start out casual and then I catch feelings.” Rebecca says all her relationships require varying amounts of emotional intensity, but none of them are just casual.

Rebecca started realising that she wasn’t set for monogamy as early as her high school years when most of us first start exploring ideas around sex, sexuality and relationships. “I always thought there was something wrong with me, that I was deviant in some way,” she says. “I would not only be attracted to, but have genuine romantic feelings for multiple people at once.”

Rebecca also always knew she wanted to be a mother. “I have always been nurturing and caring and have desired motherhood for a long time. We had to wait for finances to be stable, however, and then I had some fertility struggles and a miscarriage, before finally falling pregnant with this one.”

Rebecca’s miscarriage did influence her relationships, particularly with her husband, Gus. They both became very depressed after they lost their first child and Rebecca says she needed that time to grieve, so she needed extra support from all her partners.

Also read: WATCH: What research has to say about maintaining a happy marriage

Rebecca lives with two of her five partners; her husband Gus and her girlfriend Bree. Two of her other partners, Graham and George, don’t live with her, but they try to see each other at least every two weeks. Her fifth relationship with Mandy is complicated, so they only see each other every few months.

Three of those relationships are sexual, and yes, she is sure that Gus is the father of her daughter, Elizabeth, as she uses protection in all of her other relationships and avoided sex during times when she was on fertility drugs trying to get pregnant.

One of her partners, Graham, is an anti-natalist and believes having children is morally wrong for various reasons and doesn’t want any. This nearly caused their relationship to end, but then Rebecca gave Graham an ultimatum and said he was no longer allowed to bring up those negative views around her or her child ever again. “He agreed and has definitely tried to be a lot more supportive of my decision, and [Elizabeth], but our relationship has never really completely recovered from this wedge, and we have definitely grown somewhat apart since then,” says Rebecca.

Also, the fact that Rebecca can’t and doesn’t really want to go out and party late at night any more also means that some of her relationships have taken a hit, but they continue to love and respect each other.

Rebecca lives in a household that is based in polyamory with a blended family.

Also read: "Alex and my kids are my everything": Jennifer Lopez and her new fiancé make life as a blended family look easy

Rebecca, Gus and Elizabeth live upstairs, while Bree, her wife Anie, and their two teenage children live downstairs. They all share finances and responsibilities around the house and take turns in looking after the kids and caring for them even though with Bree and Anie’s kids being older there is less need for them to be supervised.

Rebecca says she doesn’t see a big difference in how a person in a monogamous relationship would raise their child compared to how she’s currently and planning to raise Elizabeth: “The only big differences are that she has two bonus siblings and two bonus parents. And more people around to support and love her parents, and her. Whether I am poly or not, having a child automatically has made her the biggest priority in my life.”

Gus is currently a stay-at-home dad and looks after Elizabeth during the day while Rebecca is at work, but if they need to go out at any point during the day, Bree or Anie are happy to look after the baby.

Rebecca is not “out” to her parents and many of her friends and co-workers due to fear of judgement as there are a lot of misconceptions surrounding polyamory. Her parents are very religious and she isn’t, so there’s already that divide and she fears that revealing her lifestyle to her parents would just strain their relationship. Her siblings, however, do know and are very supportive.

So how does she plan on explaining her lifestyle to her daughter as she gets older? “I think we will be very honest with her, and just tell her that mommy and daddy love many people instead of just one,” says Rebecca. Bree and Anie’s kids are both aware that their parents are polyamorous and view Rebecca and Gus as “bonus” parents, which makes Rebecca very happy. She anticipates Elizabeth saying something to someone about how “Mommy was holding hands with Uncle George”, but plans to deal with it as it comes.

Rebecca still faces the same challenges as many new mothers with Elizabeth not sleeping well, or getting sick, but she has a great community of people who all love and care for each other around her to help take care of her child.

If it takes a village to raise a child, then Elizabeth (and the other children in the household) will always be well taken care of.

(Names have been changed by request)

Are you also in a polyamorous relationship? How do you make it all work?

Share you story with us and we may publish it. Do let us know if you'd like to remain anonymous.

We live in a world where facts and fiction get blurred
In times of uncertainty you need journalism you can trust. For 14 free days, you can have access to a world of in-depth analyses, investigative journalism, top opinions and a range of features. Journalism strengthens democracy. Invest in the future today. Thereafter you will be billed R75 per month. You can cancel anytime and if you cancel within 14 days you won't be billed.
Subscribe to News24
Related Links
"Alex and my kids are my everything": Jennifer Lopez and her new fiancé make life as a blended...
Remarried with kids: This is how you can perfectly blend your families
Alicia Keys' Blended Family video redefines the modern family
Next on Parent24
FEEL GOOD | 'I finally have my arms around my son': Mom reunites with her son after 40 years apart