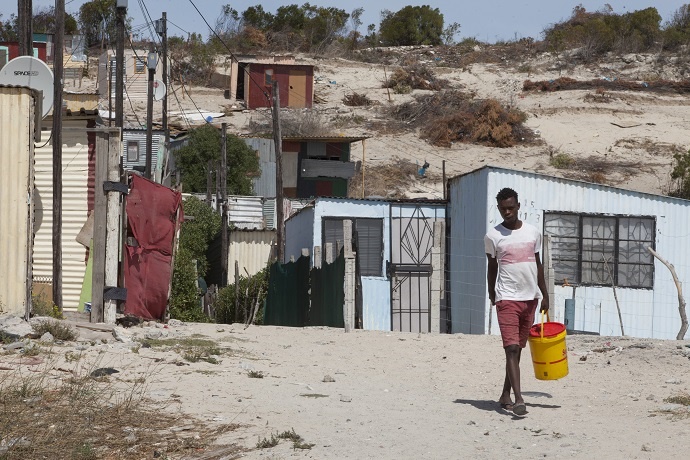 "It is very difficult to live with an out-of-school autistic teenager in a small wet shack without electricity and water."

“It is very difficult to live with an out-of-school autistic teenager in a small wet shack without electricity and water,” says Monica Mpokotshela.

She has been living in Sophia Town informal settlement near Kuils River for ten years. When GroundUp visited Mpokotshela, she was trying to dry her shack, still wet from rain days before. A ridge she has constructed prevents water from flowing into the shack.

She uses a large blue plastic sheet like a carpet. Her shack is dark, and there is no electricity. She, her unemployed husband, and her three children will spend winter being cold.

She says that it is hard to care for 12-year-old Bonelisa in a dark settlement without lights. He sneaks out of the house. Mpokotshela is burnt out. She said that having Bonelisa in school would lessen her burden. He has been on a waiting list for a special needs school for a while. She also needs a house, but she is one of many.

On 29 June, hundreds of Sophia Town residents protested demanding houses, electricity and water. Mpokotshela is considering moving to the Eastern Cape if she doesn’t get Bonelisa into a special needs school within the next few months. In the Eastern Cape, she has a family to help her care for the child, and the yards are spacious and secure.

What the state offers Esther Lewis, a spokesperson for the Department of Social Development, said that Mpokotshela could approach the nearest department office for assistance. She said the department funds residential homes, as well as day-care centres, for people with disabilities.

“The day-care centres provide stimulation and care for both children and adults with disabilities while providing relief to caregivers and parents during the day.

There are currently about 5,000 children with intellectual disabilities in our database. The department also funds the safe transportation of children with severe and profound disabilities to and from day-care centres,” she said.

Millicent Merton, a spokesperson for the Western Cape Education Department, said that special care centres are currently closed, but they could support Bonelisa with an outreach team. The provincial education department’s policy, according to Merton, is to “provide support to the learners in ordinary schools as far as possible”.

Children with severe intellectual disability may attend Special Care Centres, Merton said. When Bonelissa was assessed in 2018, he was not found suitable for such a school.

“He once disappeared, and it frightened us. Now I must stay and watch him all the time. If he gets lost, we won’t know where to start looking; the informal settlement is too big. This means I can’t look for work. I can’t take it anymore.”

Because the shacks are closely packed, Mpokotshela’s neighbours can hear the cries and sound Bonelisa makes. They don’t understand his condition and complain about the noise. Also, now that he is becoming bigger, he overpowers her.

We live in a world where facts and fiction get blurred
In times of uncertainty you need journalism you can trust. For 14 free days, you can have access to a world of in-depth analyses, investigative journalism, top opinions and a range of features. Journalism strengthens democracy. Invest in the future today. Thereafter you will be billed R75 per month. You can cancel anytime and if you cancel within 14 days you won't be billed.
Subscribe to News24
Related Links
Seen a dramatic change in your teen since lockdown began? A local psychologist advises
Alcohol ban is a must says sobriety coach : 'Industries can be rebuilt, once a life is gone it's...
Coming of age in 2020 - the year without the matric farewell
Next on Parent24
FEEL GOOD | 'I finally have my arms around my son': Mom reunites with her son after 40 years apart