Why are there still no baby-changing tables in men's toilets? This dad is not letting it slide 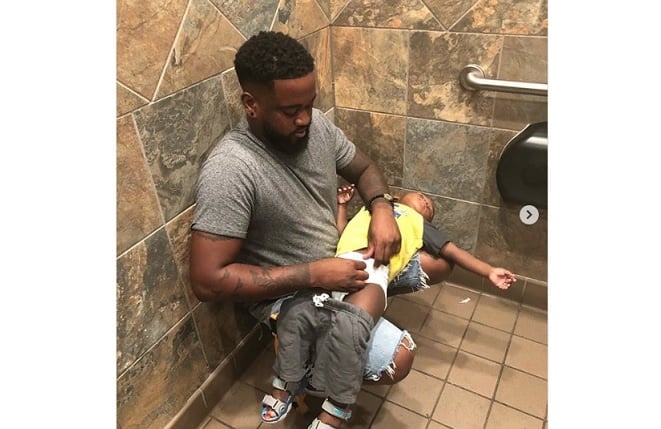 A teacher and father of three has raised an important and mostly invisible parenting issue for dads: the lack of baby-changing tables in male public toilets.

Donte Palmer's older son, Isaiah (11), is often needed to assist him with awkward public toilet nappy changes, and the boy managed to take a photo of the unique squatting position his father has to assume whenever his 1-year-old brother, Liam, needs changing.

This is a serious post!!! What’s the deal with not having changing tables in men’s bathroom as if we don’t exist!! #FLM #fatherslivesmatter clearly we do this often because look how comfortable my son is. It’s routine to him!!!! Let’s fix this problem! I Kaepernick drop a knee to this issue! @theshaderoom let’s show the innovation of fathers! #squatforchange

After seeing the image, and hearing his wife's opinion, Donte realised how absurd it is that men don't have the convenience of a changing table in order for them to perform one of the most basic parenting tasks.

"Initially, I didn't think much of the picture until my wife's comment registered," he told Parent24.

"[LaKeisha] said, 'It's sad how us mothers don't have to create or come up with innovative ways to change our babies and you men do.' That is what lead me to post the picture weeks later and it grabbed the attention of people across the world. It is an issue that clearly men across the globe has encountered..."

The issue has definitely resonated with men around the world, with quite a few posting what they do whenever they're in public and a nappy needs changing, many of them using Donte's hashtag, #SquatForChange.

What under-the-radar issues have you noticed since becoming a parent? Tell us your take by emailing to chatback@parent24.com and we could publish your opinion. Do let us know if you'd like to stay anonymous.

This father said “When there are no baby changing facilities and Leila Chops discovers automatic water..” #squatforchange #equality #fatherslivesmatter

The post has now turned into a full-on campaign, and for Donte, it's about time things changed.

"We are stuck in the 1970's," he told us. "Don't know what the hold-up is when it comes to equitable rights for parents. I am just tired of being looked at as this big almighty macho man having to be solely the breadwinner for my household and my wife looked at as the cook. It's straight nonsense, I love picking my son up from daycare and my wife loves being in charge at work being a leader for a national non-profit!"

The dad is a firm believer in sharing household and parenting responsibilities equally, something he not only picked up from his own father but also from his own personal experience of being a husband and father.

"My parenting style came from everything my father showed me growing up. Don't get me wrong, it was visible in my house as a kid but it's different when you are living it.

"It was about learning about my wife, her likes/dislikes. How can I out serve her today? That's the question I ask myself every day. But also allowing her to serve me and that is where balance comes into motion. Doing things equally in our relationship works for us and we encourage everyone to tap into that way of living."

When asked what he thinks about the response his post has received, Donte says he feels "overwhelmed with joy!"

"I am still speechless about the massive response we have been receiving. #SquatForChange will keep pushing forward and we will need all the help we can get!"

What under-the-radar issues have you noticed since becoming a parent? Tell us your take by emailing to chatback@parent24.com and we could publish your opinion. Do let us know if you'd like to stay anonymous.

We live in a world where facts and fiction get blurred
In times of uncertainty you need journalism you can trust. For only R75 per month, you have access to a world of in-depth analyses, investigative journalism, top opinions and a range of features. Journalism strengthens democracy. Invest in the future today.
Subscribe to News24
Related Links
Dads, do you think you parent your daughters and sons differently?
It's in the brain, dads are wired to be as nurturing as mothers
Are South African moms ready for "Latté Dads"?
Next on Parent24
WATCH | John Cena doesn't think he's 'qualified' to be a dad