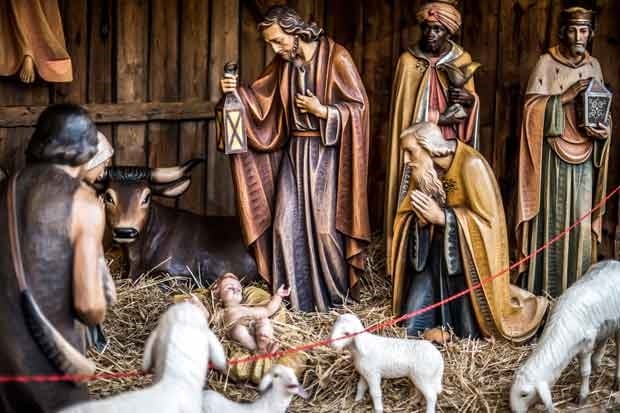 Two years ago we joined my sister Yvette in the UK for Xmas.

The trip was two-fold. Mom had been staying with her for six months, so we would escort her back home and it would be the first time in almost ten years that the family would be together for the festive season.

It would also be a good time to introduce my two-year-old to the joys of international travel.

So after an epic struggle to obtain visas and passports, my eldest sister, Luca and I were good to go on December 23.

The flight to Heathrow was largely uneventful.

There was a mini meltdown at take-off - Luca wanted to disembark to "go back to Nikki's car" - but once we were airborne, all was well.

He was actually really good, to the point where the air hostesses forgot he was on the plane.

And so our memory bank of family Christmas holidays was started.

There were a number of highlights once we had disembarked at London Heathrow airport.

A flat-on-your-back-kicking-and-screaming tantrum at passport control started us off - it did escalate our exit from the airport though.

The two-hour wait at Euston station to catch a bullet train to Birmingham with an overtired, bored and hungry toddler was a challenge.

The delightful reunion between Luca and ouma after just over six months - priceless. Luca and his Ouma chilling next to the Christmas tree. (Image: Supplied)

My shock at the freezing cold. The post-Christmas sales. My treasured FLY LONDON boots - still going strong. Too many memories to recall.

Luca's first Christmas mass, though, won hands down - when he turns 21, it will be one of those stories you recall.

Although I grew up in an Anglican household, I am not religious. It is my choice. And I will encourage my son to make his own choices when he is old enough.

But until that point, he hadn't really set foot in a church. He wasn't baptised, he had a naming ceremony with close friends and family.

So I decided it was time - he can't very well decide if he hasn't been to church now, can he? And it's Christmas. A nice way to get him started.

So off we went to the Catholic Church down the road from my sister's house.

Making a beeline for the cry room was not an auspicious start. It was met with an emphatic NO! "There are only babies in there," Luca told me, rather loudly.

Then came the running up and down the church aisles during the readings. Up and down, and up and down.

I was told that this was ok, by the priest: "Don't worry, mommy, he is alright." So I sat down. The readings continued. We almost made it to the sermon when it happened.

He made a run for it... to the altar. And then the nativity scene. And before I could blink, the Baby Jesus had been grabbed from the manger and was heading speedily towards me. He looked so proud!

I would, of course, be seated in a pew at the back of the church.

So I did what I had to. I wrestled Baby Jesus from Luca's mitten-covered fingers, walked up the aisle to the altar, nodded my head curtly, and returned the doll to its rightful place.

"This is getting a bit dangerous now mommy," the priest piped up a few minutes later, as Luca looked like he wanted to make another run for it after escaping from my tight grasp (mittens don't make for good grip).

I took this as a sign to extricate myself from the pew. Again. And we made a hasty exit. The following Christmas, I thought let us try again. This time my sister and her husband were here, and we went to morning mass at the local church.

The cry room this time was filled with toddlers, not so many babies. But it was hot.

Mass was dragging on a bit. So the kids went to play outside. There was an incident. Someone fell. There were tears and wailing. And another hasty exit was made.

This year, I am not so sure. He has shown a marginal interest in Christmas carols, though. So maybe...

Do you have any hilarious memories about what your little ones have done? Share them by emailing chatback@parent24.com and we may publish your story! Should you wish to remain anonymous, please let us know!

We live in a world where facts and fiction get blurred
In times of uncertainty you need journalism you can trust. For only R75 per month, you have access to a world of in-depth analyses, investigative journalism, top opinions and a range of features. Journalism strengthens democracy. Invest in the future today.
Subscribe to News24
Related Links
The big Christmas biscuit bake-off
How big will you go on the kids' Christmas presents this year?
PRINT IT: Do you know your Christmas songs?
Next on Parent24
Your baby's brain explained | A Parent24 Series

Read more on:
carolschristmas
Events
WATCH | 'He died at the school': Local experts unpack the issue of school bullying