Since becoming a father, Reddit co-founder Alexis Ohanian has been pretty vocal about paternity leave, a sentiment he once again highlighted in a recent interview with CNN.

Better known these days for being married to tennis pro Serena Williams, the doting dad spoke about the connection he built with his daughter during his six-week paternal leave, and how vital the time had been in supporting his wife in the weeks following their baby's birth.

"To have those moments and feel that closeness was just spectacular... I didn't realise though just how important that would be."

"My wife had had a really great pregnancy, but then complications during and after the birth meant she was dealing with a lot herself, and I had to do everything I could to be the supportive husband and supportive father, and it really put into perspective for me how important creating this family leave policy is for men and women who want to become parents."

The mogul also mentioned putting together a family leave plan at his new business, Initialized Capital, which will allow employees to take 16 weeks of paid parental leave, allocating additional leave for female employees who experience complications before or after they give birth.

Ohanian's stance on the matter is still not echoed globally but the rise in provision made for paternity leave has gained momentum.

In 2014, the International Labour Organization's report on maternity and paternity policy around the world revealed that of the 167 countries analysed, only 79 had made legal provision for paternity leave. Here's a look at how paternal leave plays out in countries across the globe: 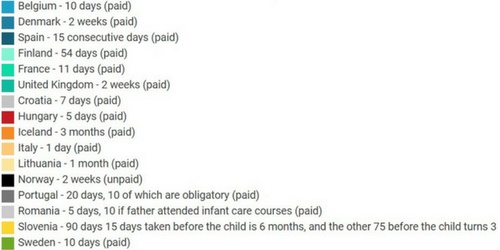 South Africa has only just caught the wave

Until last year, South African fathers only qualified for 3 days of family responsibility leave as a substitute for a lack of paternity leave.

In November 2017, The Labour Laws Amendment Bill was passed in parliament, stipulating that fathers will be allowed to take 10 days of paid paternity leave. The bill also makes provision for adoptive and surrogate parents, enabling either parent to take leave of up to 10 weeks if their child is under the age of 2.

While the bill has yet to be made law, it is in the process of being finalised and passed. Media24, of which Parent24 is a division, has already introduced the policy for staff members.

The benefits of paternity leave cannot be highlighted enough, and its advantages reach far beyond the practical. As one of the key points of the ILO report puts it:

"Recognition of men’s right to parenthood, as well as their responsibility to share unpaid care and household work, will help to break down traditional social attitudes, resulting in greater equality for both men and women at work and at home."

Did you take time off from work to spend with your partner and newborn? Share your experience by emailing to chatback@parent24.com and we could publish your letter. Do let us know if you'd like to stay anonymous.

Read more on:
parental leave
Events
WATCH | 'He died at the school': Local experts unpack the issue of school bullying