Is there a way you can scientifically plan to conceive a boy or girl? Yes. It's all about biology, timing intercourse and doing so in relation to ovulation.

Gwinyai Masukume from the University of the Witwaterstrand and Victor Grech at the University of Malta published a study that only recently got our attention: More sex during South Africa’s World Cup meant more boys nine months on.

I wondered, is that something I can scientifically measure? Can I hope and pray for a boy or girl and then follow specific methods that can make it happen?

Well, it wasn’t just a freak shift that resulted in the disproportionately higher number of male babies born in early 2011. And although it may not have been calculated, it certainly wasn’t random.

There’s research and science behind the conception of a boy that says all the little Ronaldos and Messis had much to do with the excitement and adrenaline when daddy’s team won, the romantic strolls through the fan parks that followed, and a subsequent trip to the hospital, some 9 months later.

In their study, Masukume and Grech wrote that there were two factors which led to this increase: sperm motility and when, and how frequently, people had sex.

On the contrary, “in terms of sperm motility,” they continued, “the consequence of negative natural events is that sperm motility is low. This translates into fewer boys being born.”

They explain that, with particular events such as the World Cup, people tend to feel strong emotions. In this case it was happy emotions that had male sperm swimming faster, making their way to their prize quicker, and fertilising the egg.

The make-up of the male and female sperm cells

Fertility expert Toni Weschler elaborates in her book, Taking Charge of Your Infertility, on the make-up of the male and female sperm.

So timing intercourse as closely to ovulation as possible has a better chance of conceiving a boy because a healthy male sperm cell will probably reach the egg first.

But if you have sex, say, four days after ovulation, your chances of conceiving a girl is higher, because the male sperm cells would have expired while the female sperm cell may be resilient enough to make it all the way through.

Conceiving a boy vs. a girl

Here are the factors and scenarios that may therefore increase your chances of a boy or girl, according to Toni Weschler’s research and supported by scientific studies.

WARNING: This doesn’t mean these methods are sure-fire. Also, it goes without saying, that both genders are beautiful blessings that we're grateful for! 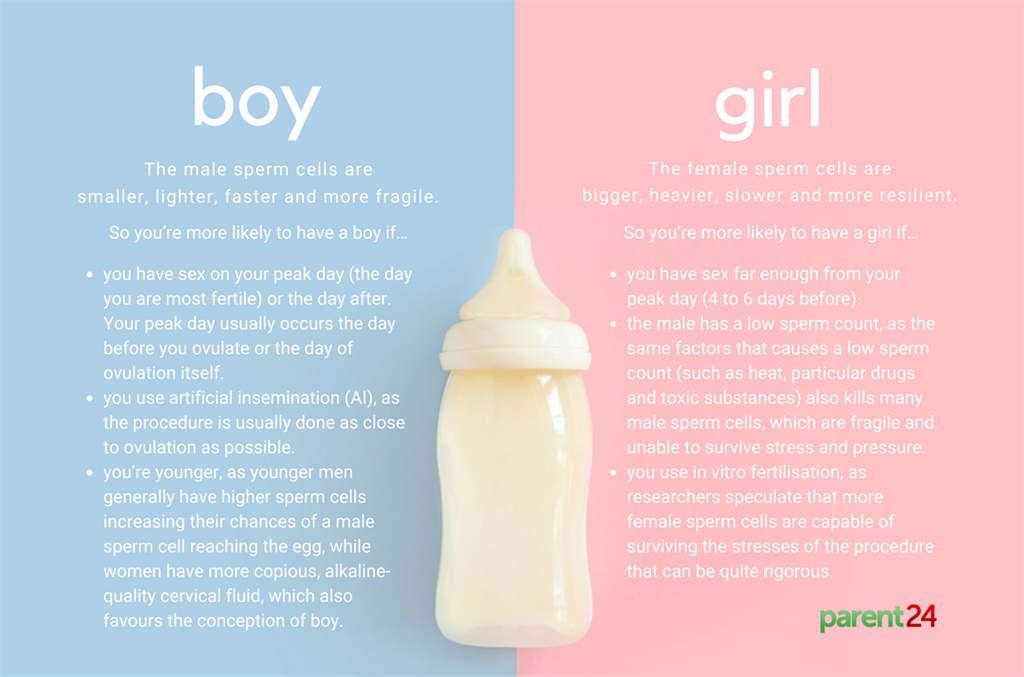 So you’re more likely to have a boy if… 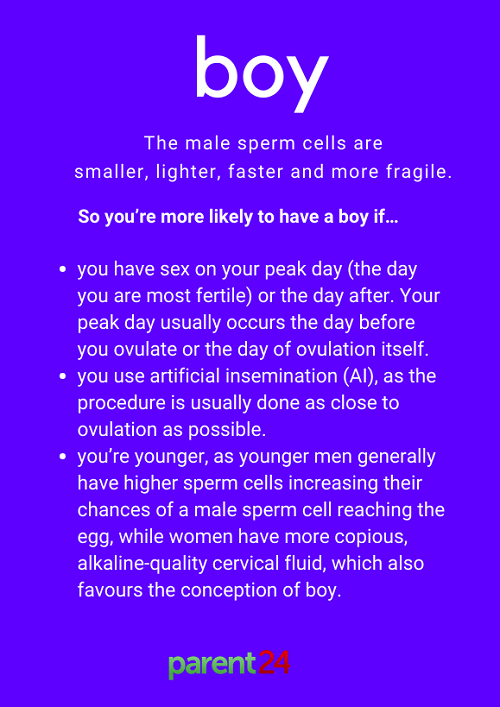 You’re more likely to have a girl if… 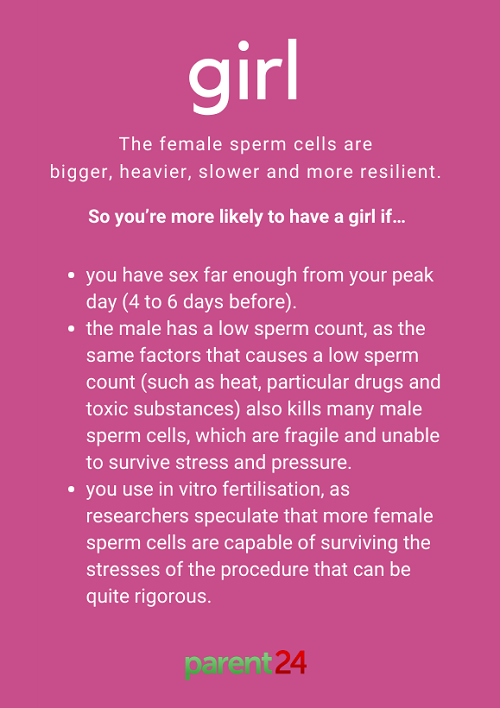 Much to do with timing

So the sex of your baby really does have much to do with the timing of intercourse in relation to ovulation, the stress levels of the dad and environmental exposure, as well as fertility interventions.

As for deliberately determining the sex of the foetus before implantation in fertility treatment, in March 2012, the Minister of Health passed regulations relating to the National Health Act of 2003 to make social sexing officially illegal in South Africa.

It’s considered ethically wrong, as people fear it might normalise selecting the sex of your baby and encourage ‘designing’ children.

That being said, the research stands, and so does the science.

So if you look up and see your son, you might also be getting flashbacks of one overly funny doctor, cracking a joke in the delivery room, at just about the worst time.

We live in a world where facts and fiction get blurred
In times of uncertainty you need journalism you can trust. For 14 free days, you can have access to a world of in-depth analyses, investigative journalism, top opinions and a range of features. Journalism strengthens democracy. Invest in the future today. Thereafter you will be billed R75 per month. You can cancel anytime and if you cancel within 14 days you won't be billed.
Subscribe to News24
Related Links
Chrissy Teigen under fire for choosing gender of baby via IVF
Choosing a baby’s gender
Designer babies: Can you choose your baby's gender?
Next on Parent24
Welcome to the FERTILITY hub! Click here for popular topics