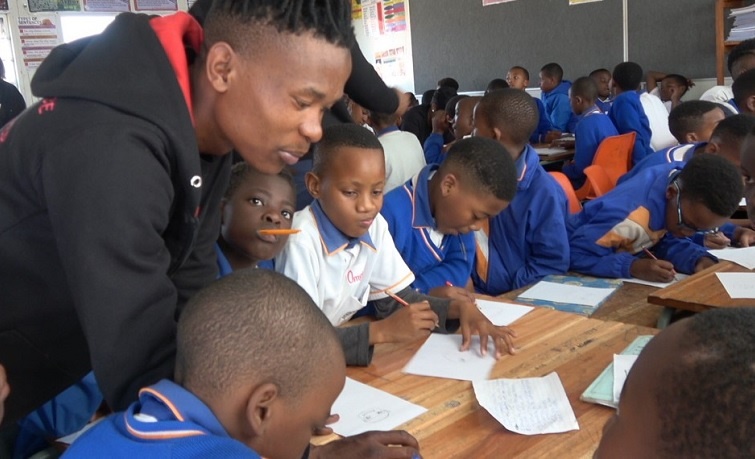 “Maybe you walk in a public place, and the boys call you something you don’t like, I just thought that was just the way it is and it would never change. Now we know it’s wrong."

Teaching girls about the power of their bodies, and boys about compassion, works, and non-governmental organisation Action Breaks Silence (ABS) has the evidence to back it up.

“It’s always been that boys bully girls at school but now we see the boys who completed the programme go up to the bullies and say, ‘Hey, you can’t talk to girls like that’”, grade six pupil Thabisang Primary School , Nonkululeko Dube, said.

“The boys just thought girls are weak and less than them, and the girls thought boys are trash but we learned in the programme that we are all equal. It showed us that boys and girls can be friends. The programme changed the way things happen at school.”

She also said that before completing the organisation’s six-week long, skills-focused programme she didn’t know street harassment was wrong.

“Maybe you walk in a public place, and the boys call you something you don’t like, I just thought that was just the way it is and it would never change. Now we know it’s wrong. We tell them ‘no’ or we tell someone we trust what happened”, the Thabisang Primary School pupil said.

The charity has reached over 55 000 beneficiaries Since 2013, ABS has been working towards achieving its aim of creating communities where women and girls can live free from fear of sexual violence.

The organisation offers educational programmes for girls and boys in grade five as well as the wider school community, including teachers and parents.

These programmes are currently implemented, free of charge in India, South Africa, Curacao and the United Kingdom.

To date, the organisation has engaged more than 15 000 South African youths in 150 workshops in over 100 schools, and has trained 70 local trainers to facilitate these programmes. Internationally, the charity has reached over 55 000 beneficiaries.

By challenging gender stereotypes, building empathy and respect towards girls and women, and giving boys the space to express their full range of emotions – not just anger - the organisation believes it can contribute to shifting patriarchal attitudes that produce a culture of violence towards girls and women. Start young, ABS believes, and drive a message of respect and empowerment and you will be making a contribution to treating the cause and not just the symptom.

The symptoms are revealed in the horrifying statistics on gender-based violence each year. According to Africa Check, the South African police recorded 40,035 rapes in 2017/18 which means an average of 110 rapes recorded by the police each day.

So what are the results of ABS’ intervention? Real impact, new research shows.

Professor in Psychology at the University of Pretoria, Maretha Visser, began evaluating ABS’ programmes in 2018 to learn how boys construct gender roles in their development process. She discovered, through interviews with a sample of the programme participants, that the boys changed their attitudes to girls and women, as well as their behaviour towards them.

“The participants expressed that they have learned that boys and girls are equal and that the stereotypes they believe may not be true.”

When asked how their behaviour towards girls changed after the programme, one participant told Visser: "When I am provoked in class by girls, I just report the matter to the teacher. Previously I would just beat the girl or tease her."

There was also a change in boys’ reaction to peer pressure and stereotypes they encounter in their communities. Despite boys being teased for playing with girls, “after the workshop they would play with girls because they see them as equal and have learned that they are all human beings”.

She said some of the boys demonstrate active bystander behaviour by standing up for girls in the face of bad treatment by other boys. “They say, ‘Don’t do that, this is not how you are supposed to treat a girl’ and then they tell the teacher”.

“They just have this confidence around them. I think they are more able to defend themselves against threats from men. They were taught self-defence but they also know now how to speak up and defend themselves and say, ‘I had a problem’.”

Visser is confident of ABS’ programmes’ ability to impact the toxic gendered attitudes that result in hundreds of thousands of girls and women experiencing violence every year and recommends the programmes be extended to all South African primary schools and upgraded to be applicable in secondary schools, too.

This is exactly ABS’ intention. In August it began the second phase of its programme outreach, enrolling pupils from the same schools it worked with last year in Soweto, Atteridgeville, Lotus Gardens and Sausville, while fundraising to be able to reach more school communities.

With every child reached and attitude changed, a girl or woman is protected from aggression in some form. Targeting children at an impressionable age and providing a counter to prevailing patriarchal messaging is a sustainable and powerful approach to tackling gender-based violence and one that other organisations can learn from, too.

WATCH: After resisting sexual harassment, a group of Indian schoolgirls were beaten into hospital


OPINION: We aren’t doing enough to protect our boys from sexual assault