Lawyer: Yes, you can sue if your child is injured at school 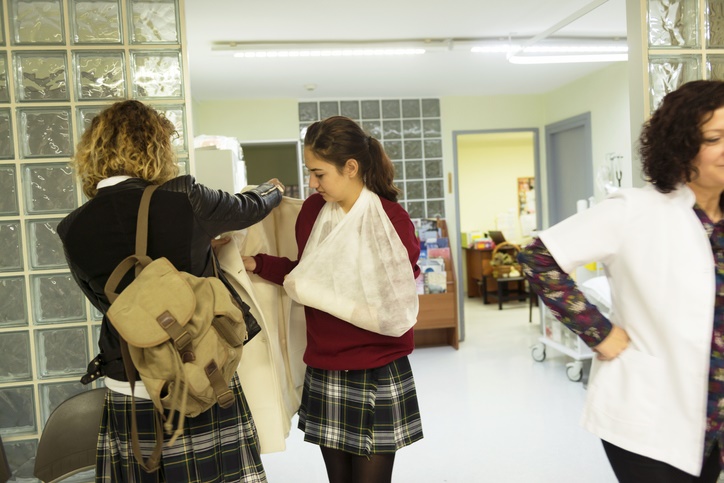 Over the first six months of 2019, a total of seven school stabbings have been reported in South Africa.

Parents send their children to school with a reasonable expectation that they will be as safe as they would be at home however, accidents happen at schools on an alarmingly frequent basis in South Africa.

This is according to Kirstie Haslam, partner at DSC Attorneys, who says that if your child is injured at school or during extra-curricular school activities due to negligence on the part of the school, you may be able to pursue compensation for your child’s personal injury.

How safe are children at school in South Africa?

The safety of children while at school is covered under basic rights in the Constitution and by the South African Schools Act Haslam explains.

“Legally, schools are expected to take reasonable measures to ensure the safety of the children in their care,” she says.

“Examples of such measures include barring access to dangerous areas, limiting access to the premises to authorised people only, installing railings where there are high drop-offs and ensuring ramps aren’t slippery.”

Schools are also responsible for monitoring children’s activities while they’re on school grounds.

Must read: "Goal posts fell onto my son and he did not survive": A dad starts a much-needed conversation around school sport safety

What constitutes a personal injury case?

Haslam says that there is a distinction between criminal action by a teacher or fellow student and a personal injury case.

“For criminal action, such as abuse, theft or physical assault, a case must be opened with the police,” she says. “Any action the parents then choose to take in order to prove the school should have prevented the crime would constitute a civil case.”

If it can be shown that a child was injured due to a negligent act or omission by a school, Haslam says that there are clear grounds for a personal injury case.

Common causes of claims for school accidents and injuries

Haslam highlights some of the most common causes of personal injury claims for injuries in schools, including:

In 2016, the courts ordered a school to compensate a boy seriously injured after falling on a steel rod used to hold up a sapling tree, Haslam explains.

Serious injuries, including fatalities, occur regularly on school sports fields. “For example, 54 serious rugby injuries were reported in South Africa between 2008 and 2011. Of these, over a quarter resulted in quadriplegia.”

In 2013, a 13-year-old boy was badly injured when a group of school children were flipping each other into the air using the cricket nets at school.

“Although the area was off limits, it was successfully argued that the school teachers were supposed to monitor children during breaks and should have prevented the accident,” she says. The boy’s family was awarded R23.5 million in damages by the Pretoria High Court.

Also read: These 9 safety tips will keep your child safe in dangerous situations

In 2011, a boy sustained brain damage after rolling off an upper bunk bed (with no protective railing) onto a concrete floor at a school camp. Haslam says that both the camp and the Department of Education were found liable, given failure of those in charge to foresee the danger or take steps to prevent it.

Over the first six months of 2019, a total of seven school stabbings have been reported in South Africa.

In cases involving attacks with weapons in schools, Haslam says that it may be argued that the schools should have prevented the weapons from being brought onto school grounds.

Not all attacks involve easily concealed weapons. She says that one of the most shocking occurred in 2008, when a learner armed with a sword killed a fellow pupil and injured a learner and two school employees.

A more recent (tragic) example of actionable neglect on the part of schools to provide a safe environment for children has been the death of a number of children using so-called pit toilets at school. Haslam says that courts have held that this failure to provide safe and decent sanitation for children constitutes a human rights violation.

According to Haslam claims may be brought against schools or the relevant Education MEC, depending on the circumstances.

She advises that it is worthwhile using an attorney to assist with personal injury claims. “A reputable personal injury attorney with a medico-legal team can assess your claim, help prepare supporting evidence and represent you in legal proceedings, giving you the best chance of receiving the compensation you deserve,” she concludes.

We live in a world where facts and fiction get blurred
In times of uncertainty you need journalism you can trust. For 14 free days, you can have access to a world of in-depth analyses, investigative journalism, top opinions and a range of features. Journalism strengthens democracy. Invest in the future today. Thereafter you will be billed R75 per month. You can cancel anytime and if you cancel within 14 days you won't be billed.
Subscribe to News24
Related Links
"My kid bumped his head!" When you should seek medical attention
WATCH: 3 simple experiments to teach your kids kindness
Dangerous children's toys and hazards to look out for
Next on Parent24
OPINION | 'The future is wild': Preparing your child for the 4th Industrial Revolution

Read more on:
safety
Events
Locals encouraged to tell their homegrown stories to ignite a love for reading