Julius Malema has given the EFF five years to build a new private school.

He said at the party's elective conference in Nasrec that they have five years to build a new school or else they should not be re-elected.

He says the school will be built in Alexandra and will have the best teachers from South Africa and Zimbabwe.

"We are going to hire highly qualified teachers and kids will learn free of charge and it will be kids of poor people, child-headed families, people dying from HIV/AIDS," says Malema.

A variety of reactions have been expressed on Facebook, majority being skeptical about the success of this venture.

Some people are praising the initiative saying it will put black excellence on the horizon.

Others have asked why is it a private school, stating if the EFF wanted education to be accessible for everyone it would be a public school.

People were also asking why the school would be built over five years when it can be done over a shorter time period.

Malema says he wants to see kids from poor economic backgrounds flourish because he can relate.

His mother was a domestic worker when he grew up and she suffered from epilepsy and couldn't do much for him.

Is the cost of an overseas education really worth it?

Related Links
Can a school really charge a penalty fee for moving a child to another school?
Share
Next on Parent24
Is your child keeping up with the 'coronacoaster'? Tips to help them survive the rest of the year 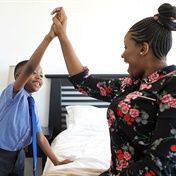