Not much progress with Ramaphosa’s school sanitation campaign 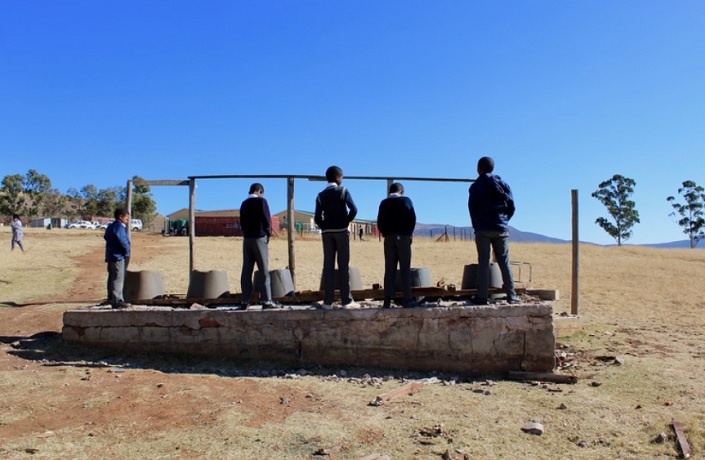 Nearly a year and a half after the launch of the school sanitation campaign by President Cyril Ramaphosa, only 266 out of 3,898 schools have benefitted.

The Sanitation Appropriate for Education (SAFE) campaign, announced in August 2018 by Ramaphosa, targets schools where sanitation was inadequate or unsafe.

According to the Department of Basic Education’s audit about 3,898 schools do not have appropriate sanitation across the country.

But a year and a half later, Elijah Mhlanga, spokesperson of the Department of Basic Education, told GroundUp:

“To date 266 schools have been provided with proper sanitation. This was achieved thanks to the collective effort of private partnership, donations and the Department’s Accelerated School Infrastructure Delivery Initiative (ASIDI) and Education Infrastructure Grant that is managed at provincial level. Currently 880 schools are at various stages of planning.”

The bulk of the money for the programme was from National Treasury, with “smaller contributions” from the private sector.

Mhlanga said procurement processes often delayed the start of construction and other challenges included resistance from local communities demanding better schools, not just ablution facilities, as well as opposition from business groups who felt their members should be getting contracts “simply because they happen to be located in a specific province”. Mhlanga said the plan was to eradicate inappropriate sanitation in all 3,898 schools by the end of the 2021/22 financial year.

Asked whether at the current rate of progress this target could possibly be met by 2022, he said: “Planning and procurement are an integral process when we roll out infrastructure programmes.

The first year was dedicated to these processes in line with legal requirements. We should be able to report a higher number of project completions by the end of the next financial year.”

Roné McFarlane, Equal Education Co-Head of Research, said that though the main purpose of the SAFE initiative seemed to be to bring in private sector funding, the Department had stated that of 188 projects completed by June 2019, only 18 had been funded from SAFE. The rest were funded from existing education infrastructure grants.

“The lack of transparency around the SAFE Initiative makes it very difficult for the public to monitor construction and interrogate claims of progress. Conflicting data on the need for toilets at schools in different provinces further frustrates delivery – it is impossible for government to adequately address the needs at schools if it does not have accurate and up to date data on the conditions in schools.”

She said national and provincial education departments must get better at ensuring that there are consequences for underperformance and wasteful expenditure in construction projects.

McFarlane said the government was not setting aside sufficient funds to ensure the improvements promised by Ramaphosa. “As long as government is not willing to put its money where its mouth is, and is unable to muster significant private funding, sanitation construction will remain hamstrung.”

© 2020 GroundUp. This article is licensed under a Creative Commons Attribution-NoDerivatives 4.0 International License..

Our children are not safe at school, picketers tell Western Cape Premier

We live in a world where facts and fiction get blurred
In times of uncertainty you need journalism you can trust. For 14 free days, you can have access to a world of in-depth analyses, investigative journalism, top opinions and a range of features. Journalism strengthens democracy. Invest in the future today. Thereafter you will be billed R75 per month. You can cancel anytime and if you cancel within 14 days you won't be billed.
Subscribe to News24
Related Links
Coronavirus: Will South African schools be closing, and what will that mean to parents?
Minister instructs schools to enrol undocumented children
Some immigrant children are still being turned away from schools
Next on Parent24
'We use real-world examples': Cottage school owner shares the benefits of interest-based learning