Think you’re bad at math? You may suffer from ‘math trauma’ 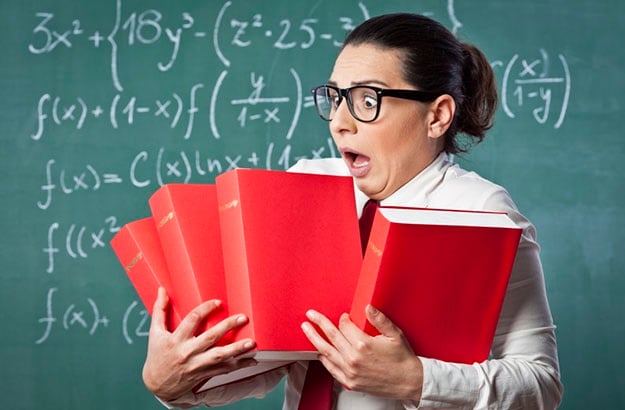 While math trauma has multiple sources, there are some that parents and teachers have power to influence directly: outdated ideas of what it means to be good at math.

I teach people how to teach math, and I’ve been working in this field for 30 years. Across those decades, I’ve met many people who suffer from varying degrees of math trauma – a form of debilitating mental shutdown when it comes to doing mathematics.

When people share their stories with me, there are common themes. These include someone telling them they were “not good at math,” panicking over timed math tests, or getting stuck on some math topic and struggling to move past it. The topics can be as broad as fractions or an entire class, such as Algebra or Geometry.

The notion of who is – and isn’t – a math person drives the research I do with my colleagues Shannon Sweeny and Chris Willingham with people earning their teaching degrees.

One of the biggest challenges U.S. math educators face is helping the large number of elementary teachers who are dealing with math trauma. Imagine being tasked with teaching children mathematics when it is one of your greatest personal fears.

Math trauma manifests as anxiety or dread, a debilitating fear of being wrong. This fear limits access to life paths for many people, including school and career choices.

While math trauma has multiple sources, there are some that parents and teachers have power to influence directly: outdated ideas of what it means to be good at math. These include speed and accuracy, which were important in decades past when humans were actual computers.

But research has confirmed what many people share with me anecdotally: Tying speed with computation debilitates learners. People who struggle to complete a timed test of math facts often experience fear, which shuts down their working memory. This makes it all but impossible to think which reinforces the idea that a person just can’t do math – that they are not a math person.

What’s more, students who succeed at tests of timed math facts may believe that being good at math means simply being fast and accurate at calculating. This belief can lead to a fragile math identity. Students fear revealing they don’t know something or aren’t that fast, so may shy away from more challenging work. No one wins.

The myth that fast recall of basic math facts is good for learning has deep and pernicious roots. It comes from the best of intentions – who wouldn’t want kids to be good at calculating?

But research shows that fact fluency – the ability to easily recall facts, like 3 x 5 = 15 – is best developed from first making sense of arithmetic operations. In other words, the first step in building a mathematical memory is understanding how that math works.

Skipping the sensemaking step makes for fragile understanding and cognitively expensive memorization. When someone only memorizes, every new fact is like an island unto itself, and is more readily forgotten. In contrast, understanding patterns in math facts compresses the cognitive load required to recall related facts. Sensemaking promotes deep, robust and flexible understanding, allowing people to apply what they know to new problems.

So what can parents and teachers do to support fact fluency?

First, find the wonder and joy.

Games and puzzles that get people playing with numbers, such as Sudoku, KenKen or certain card games, create an intellectual need to use math facts that helps kids develop fact fluency. Asking kids to explain their thinking – using words, pictures or objects – validates the importance of their ideas.

Not having a correct answer doesn’t mean all thinking is incorrect. Asking kids to explain their thinking also helps in understanding what they know now, and what they might learn next. Questions about how a kid got an answer can get them thinking about what does not quite work and is worthy of revision. When you ask these questions, it’s good to have a poker face; if you broadcast that an answer is wrong or right, it can reinforce the belief that only right answers count.

Second, do no harm.

It’s important that parents avoid giving kids messages that they are not math people. This can have a negative impact on kids’ beliefs about their own ability to learn. Also, beware claims that kids must suffer to learn mathematics.

For many adults, today’s math classes are very different from those we experienced. U.S. schools have moved away from speed and accuracy – sometimes called “drill and kill” – and toward discussing and making sense of mathematics. Mathematics teacher educators are in agreement that these are good things. Look for the deeper meaning in what your child is learning, knowing that deeper understanding comes from connecting multiple ways to solve problems.

If you recognize that you are a survivor of math trauma, take heart. You are not alone, and there are ways to heal. It starts with understanding that mathematics is broad and beautiful – most of us are much more mathematical than we think.

How do you introduce maths in your every day life with your kids? How did you help them feel a little more comfortable with the subject? Tell us by emailing chatback@parent24.com.

Sign up to our weekly newsletter to receive Parent24 stories directly to your inbox.
We live in a world where facts and fiction get blurred
In times of uncertainty you need journalism you can trust. For only R75 per month, you have access to a world of in-depth analyses, investigative journalism, top opinions and a range of features. Journalism strengthens democracy. Invest in the future today.
Subscribe to News24
Related Links
WATCH: Easy ways to help your child understand fractions with what you’ve got at home
WATCH: This DIY is the easiest and simplest way to learn fractions
How to give our kids more "math talk"
Next on Parent24
'The forgotten sector': ECD teachers excluded from vaccine rollout