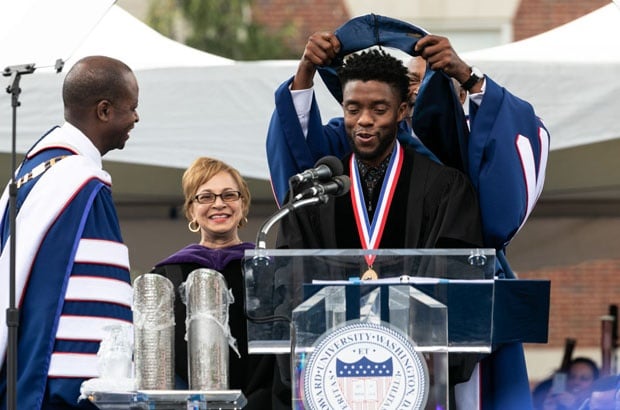 From Chadwick Boseman to Oprah - these celebs attended graduation ceremonies and gave the most inspiring speeches.

Work hard, be true to yourself, embrace diversity and seize the moment. It's the same advice graduation speakers have offered for ages, yet every year some addresses stand out. Some are powerful. Some are poetic. Some are political.

This year, colleges have invited speakers ranging from Hillary Clinton to Chance the Rapper, each bringing their own life lessons. As commencement ceremonies continue across the US this weekend, here are a few of the highlights so far:

Prime minister of Canada, speaking at New York University on 16 May

You have a world of opportunity at your fingertips, but as you go forward from here, understand that just around the corner a whole different order of learning awaits in which your teachers will come from every station in life, every education level, every belief system, every lifestyle. And I hope you will embrace that.

Vote, vote, vote. Pay attention to what the people who claim to represent you are doing and saying in your name and on your behalf. They represent you, and if they have not done right by you, if their policies are at odds with your core beliefs, then you have a responsibility to send them packing.

CEO of Apple, speaking at Duke University in North Carolina on 13 May

Fearlessness means taking the first step even if you don't know where it will take you. It means being driven by a higher purpose rather than by applause. It means knowing that you reveal your character when you stand apart more than when you stand with the crowd.

If you step up without fear of failure, if you talk and listen to each other without fear of rejection, if you act with decency and kindness even when no one is looking — even if it seems small or inconsequential — trust me, the rest will fall into place.

U.S. ambassador to the United Nations, speaking at Clemson University in South Carolina on 10 May

Beware of social media. It's almost as if it was invented to destroy gratitude. Everyone presents their most carefully edited lives on Twitter or Instagram. We all do it, right? Posting the best pictures of the most exciting places we go and the most interesting things we see.

But our social media lives aren't the real world. Real life is usually messier. And whether we mean to do it or not, the fake lives we live on social media can evoke a kind of envy that is a lack of gratitude, that is very damaging.

At Dillard University in New Orleans on 12 May

Our parents, grandparents, ancestors sacrificed not so that we could keep doing the same thing that they were doing but so that we can be better. To simply copy them would be almost an insult to their sacrifice.

At Yale University in New Haven, Connecticut, on 20 May

I believe healing our country is going to take what I call radical empathy. As hard as it is, this is a moment to reach across divides of race, class and politics. To try to see the world through the eyes of people very different from ourselves, and to return to rational debate. To find a way to disagree without being disagreeable. To try to recapture a sense of community and common humanity.

When we think about politics and judge our leaders, we can't just ask, 'Am I better off than I was two years or four years ago?' We have to ask, 'Are we all better off? Are we as a country better, stronger and fairer?'

Actor who recently starred in "Black Panther," at Howard University in Washington, D.C., on 12 May

I don't know what your future is. But if you are willing to take the harder way, the more complicated one, the one with more failures at first than successes — the one that has ultimately proven to have more meaning, more victory, more glory — then you will not regret it. Now, this is your time. The light of new realisation shines on you today. Howard [University]'s legacy is not wrapped up in the money that you will make but the challenges that you choose to confront. As you commence to your paths, press on with pride, and press on with purpose.

Musician and actress, at Rutgers University's campus in Newark, New Jersey, on 14 May

Teach, volunteer, show up at PTA meetings, show up at the Boys and Girls Club, vote, march, be a citizen. Because in a world of bullets and bots, divisions and distractions, we need more citizens pulling us together instead of trying to pull us apart. Give back to your home, as the kind of citizen who builds bridges, not walls. Graduates, home shapes you. You make sure you shape it back.

Actor, at Kent State University in Ohio on 12 May

You have to take risks. I'm going to ask you to take risks whenever you can. Put yourself on the line, don't be afraid to look foolish, make mistakes — take chances. It's one of the best things you can do. And what that will lead to is self-discovery, and it will lead you back to your natural, authentic self. And I really encourage you as you get older to go back to who you were when you were a kid, because that was the most authentic you that there has been.

What words of advice would you offer new graduates? Tell us by emailing chatback@parent24.com and we may publish your comments.

Sign up to our weekly newsletter to receive Parent24 stories directly to your inbox.
We live in a world where facts and fiction get blurred
In times of uncertainty you need journalism you can trust. For 14 free days, you can have access to a world of in-depth analyses, investigative journalism, top opinions and a range of features. Journalism strengthens democracy. Invest in the future today. Thereafter you will be billed R75 per month. You can cancel anytime and if you cancel within 14 days you won't be billed.
Subscribe to News24
Next on Parent24
About to start a new job? Local communication specialist shares what he wishes he knew starting out