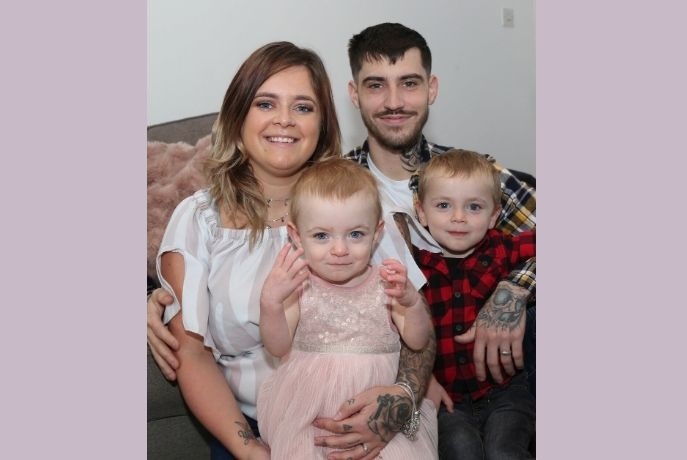 Waking up in the middle of the night to a wet patch on her bed, Natasha Sherwin, 27, never imagined her waters had broken at 16 weeks pregnant.

The retail assistant and her husband Sam, 26, merely laughed it off together as they assumed, she had embarrassingly 'wet herself' in her sleep.

But it soon turned into a real-life nightmare when Natasha went to the toilet moments later and discovered blood.

After arriving at hospital, she was told by medics to prepare for labour, but after 48 agonising hours, there was no sign of a baby, and she was advised a termination as there was just a two per cent chance of survival.

But Natasha was determined to give her little girl a fighting chance and incredibly, her mother's instinct proved right. Against all the odds, her baby managed to stay inside her mum, with tiny amounts of fluid to protect her, until 30 weeks. 'Praying for the best but expecting the worst'

Natasha from Elgin, Scotland, says: "I was shocked to hear my waters were broke, I thought perhaps I had an accident until I started bleeding.

"Every time I moved in the hospital, water would trickle down my leg and doctors thought I was going to give birth.

"I was praying for the best but expecting the worst, two days later, I was asked if I would like to terminate, but my answer was always no.

"I decided I would let mother nature take its course – I wasn't going to kill my baby."

The pregnancy complication known as preterm premature rupture of the membranes (PPROM) meant Natasha and her baby were at a high risk of developing an infection.

The mum-of-two had to stay in hospital for two weeks following her waters breaking to see if the fluid levels would increase.

She says: "I was warned my baby probably won't survive and asked if I would like to terminate weekly until I was 22 weeks pregnant.

"I just couldn't do that to my baby - I could feel her moving inside me, and I just knew I had to let her fight.

"The fluid would build back up but disappear again – the highest it ever got was 3cm, and for 90 per cent of my pregnancy, there was none their protecting Faith." 'Something you would see on TV'

Natasha's pregnancy was at a high risk, and doctors kept her in from 23 weeks to ensure she was under close supervision. At 30 weeks she welcomed her daughter into the world on the January 12, 2018 – she weighed 2 lb 13 oz and was immediately taken into NICU.

Unbeknownst to Natasha, she had contracted E.coli, which led to sepsis the day after giving birth.

She adds: "I was on death's door; I was struggling to catch my breath and unable to speak.

"I couldn't even see Faith as I was getting sicker and sicker. "Sam was told to prepare for the worst as a CT scan discovered my right lung was full of fluid, and the left was also filling up, and I had pneumonia.

"I had my first cuddle with Faith after a week, I felt horrendous and still unable to move, but I needed to see my baby."

Natasha spent two weeks fighting for her life and believes without the blood transfusion she 'wouldn't be here to see her children grow up'.

She compares her experience to 'something you would see on TV' and is in disbelief that it happened to her - even now over one year later.

She adds: "Once I got better and was told about the severity of my little girls' condition, I was in shock and couldn't believe this was happening to my family.

"The first six weeks of Faith's life were spent in hospital, and after five weeks at home, she was emergency flown down to Edinburgh because she stopped breathing and they had to put her on the life support machine. 'She was fighting for her life'

"She was fighting for her life due to catching bronchitis and having chronic lung disease; her body couldn't fight it off without her having a machine to breathe for her.

"She developed a blood clot in her leg and stomach that caused her leg to go grey, and her toes were black."

Tasha and Sam were faced with the 'hardest decision of their lifetime' as medics said they could either amputate her leg or give Faith medication to reduce the clots but with a high risk of bleeding on the brain.

She continues: "Thank god the medication worked, but her health continued to decline as her left lung collapsed due to a build-up of mucus.

"It was horrible to see our tiny daughter on three different machines."

Despite their traumatic ordeal, Natasha now couldn't be happier that she kept fighting for baby Faith who is now 22 months old and thriving. Natasha adds: "An abortion was never an option for me and I am so glad I took the risk as she has changed our lives for the better.

"She has completed our family and my son Tyler, 3, is the best big brother."

We live in a world where facts and fiction get blurred
In times of uncertainty you need journalism you can trust. For only R75 per month, you have access to a world of in-depth analyses, investigative journalism, top opinions and a range of features. Journalism strengthens democracy. Invest in the future today.
Subscribe to News24
Next on Parent24
WATCH | Desperate to be a dad, he gave up bread and was rewarded with a surprise pregnancy