11 games to play with your preschooler to boost math skills 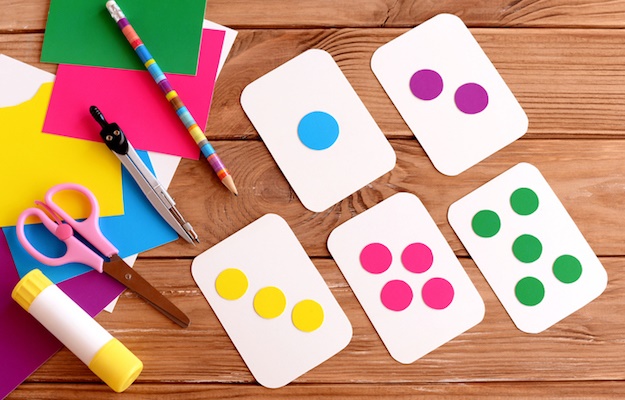 How can parents best help their children with their schooling without actually doing it for them? This article is part of The Conversation's series on Parents’ Role in Education, focusing on how best to support learning from early childhood to Year 12.

Before beginning official schooling, parents can give their young children a boost in learning mathematics by noticing, exploring and talking about maths during everyday activities at home or out and about.

One successful approach for strengthening the role of parents in mathematics learning is Let’s Count, implemented by The Smith Family. This builds on parents’ strengths and capabilities as the first mathematics educators of their children.

Indeed, children whose families had taken part in Let’s Count showed greater mathematical skills than those in a comparison group whose families had not participated. For example, they were more successful with correctly making a group of seven (89% versus 63%); continuing patterns (56% versus 34%); and counting collections of 20 objects (58% versus 37%).

These findings, among many others, are a strong endorsement of the power of families helping their children to learn about mathematics in everyday contexts.

What parents can do to promote maths every day

Discussing and exploring mathematics with children requires no special resources. Instead, what is needed is awareness and confidence for parents about how to engage.

However, our research shows that one of the biggest barriers to this is parents’ lack of confidence in leading maths education at home.

Through examining international research, we identified the type of activities that are important for early maths learning which are easy for parents to use. These include:

Neuroscience research has provided crucial evidence about the importance of early nurturing and support for learning, brain development, and the development of positive dispositions for learning.

Early brain development or “learning” is all about the quality of children’s sensory and motor experiences within positive and nurturing relationships and environments. This explains why programs such as Let’s Count are successful.

Sometimes it can be difficult to come up with activities and games to play that boost children’s mathematics learning, but there are plenty. For example, talk with your children as you prepare meals together. Talk about measuring and comparing ingredients and amounts.

You can play children’s card games and games involving dice, such as Snakes and Ladders, or maps, shapes and money. You can also read stories and notice the mathematics – the sequence of events, and the descriptions of characters and settings.

Although these activities may seem simple and informal, they build on what children notice and question, give families the chance to talk about mathematical ideas and language, and show children that maths is used throughout the day.

Make it relevant to them

Most importantly, encouraging maths and numeracy in young children relies on making it appealing and relevant to them.

For example, when you take your child for a walk down the street, in the park or on the beach, bring their attention to the objects around them – houses, cars, trees, signs.

Talk about the shapes and sizes of the objects, talk about and look for similarities and differences (for example: let’s find a taller tree or a heavier rock), count the number of cars parked in the street or time how long it takes to reach the next corner.

Discuss the temperature or the speed of your walking pace.

Collect leaves or shells, and make repeating patterns on the sand or grass, or play Mathematical I Spy (I spy with my little eye, something that’s taller than mum).

It is never too soon to begin these activities. Babies who are only weeks old notice differences in shapes and the number of objects in their line of sight.

So, from the earliest of ages, talk with your child about the world around them, being descriptive and using mathematical words. As they grow, build on what they notice about shapes, numbers, and measures. This is how you teach them mathematics.

Do you talk to your toddler and preschooler about shapes, weights, speeds and other mathematical concepts? Have you seen it make a difference to their development? Do you have other ideas and games parents can play with their little ones to advance their grasp of maths? Send your ideas to chatback@parent24.com and we may publish them.

Want to receive Parent24's top stories for the week in your inbox? Then subscribe to our weekly newsletter.