Learn the difference between tech toys that actually encourage learning and those that are a waste of money.

Shopping for a new high-tech gift for the child in your life this holiday season? It’s easy to be overwhelmed by all the options. Bright boxes, colourful apps and cute plastic robots will promise that learning outcomes will improve if your child plays with x, y or z.

If you like technology, you probably think it’s a good thing for children to be exposed to it at an early age. After all, studies show that by fifth grade, stereotypes regarding who is good at math and science, technology and engineering are already formed.

It’s important to get in there early to counter the formation of these stereotypes, by piquing everyone’s interest when they are young. That way doors aren’t preemptively closed for them later on, when choosing a field of study or a profession.

But it’s confusing to browse all the tech toys on the market, looking for one that will support a child’s budding STEM knowledge. I coined the metaphor of “playgrounds versus playpens” as a way to understand the best developmentally appropriate experiences with technology. As new gadgets, robots, apps and games are commercially released, going back to this metaphor can guide you beyond the bells and whistles to focus on how a tech toy may support learning and development. In my latest book, “Coding as a Playground,” I invite readers to recall the playground of their childhood. Children were able to run, to explore, to invent new games, to engage in pretend play; to communicate, collaborate and problem-solve with others; and to make their own choices.

Now, think of a playpen. These safe, confined spaces are in stark contrast with playgrounds. The playpen conveys a lack of freedom to experiment, lack of autonomy for exploration, lack of creative opportunities and lack of risks. It’s a place where a child can be stowed to pass the time.

While playgrounds are open-ended, playpens are limited. The playground promotes while the playpen hinders important aspects of human development.

Unfortunately, from a developmental perspective, many of today’s technologies for young children are playpens and not playgrounds.

Of course, computer games, like playpens, deprive children of physical activity. But the metaphor goes further than that. Some computer games are marketed as educational because they promote academic skills and teach about shapes, colours, letters, sounds and numbers. Most software provides tasks with right and wrong answers and thus doesn’t encourage problem solving and logical thinking or exploration and creativity. Most robots provide prepackaged challenges for children to complete, and in the process, learn to code. These are all examples of high-tech playpens – they’re limited and do not tap into many important dimensions of healthy positive development in children.

Six C’s to look for

This framework focuses on six positive behaviors that can be promoted through the use of technological playgrounds. These behaviors involve:

These six C’s can be fostered in real-world playgrounds and can also be supported by robotic platforms, virtual worlds, programming languages, apps, games and storytelling systems for children.

But it’s not enough to read the label on the box. It’s important to understand the kind of experiences children will have when interacting with the technology. 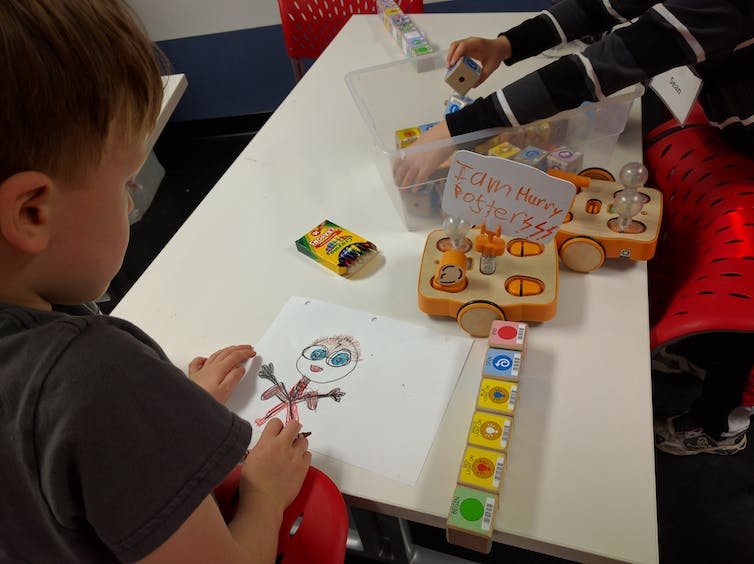 The KIBO robot developed by Marina Bers’s research group utilizes tangible blocks instead of screens, and mixes in art to help kids learn to code in a playful way. Marina Bers, CC BY-ND

Search out technologies that engage children as producers, not consumers. That means robotic kits, apps or computer games that let them be makers, artists, coders and designers. Try to avoid prepackaged solutions that target a specific skill set and promise to help children improve their academics. Remember that technological playgrounds need to also be fun!

At the DevTech research group that I direct at Tufts University, we focus on a particular kind of technological playground: programming environments for young children between 4 and 7 years old. Our research shows that by learning how to code, children take on the role of producers and not merely consumers. They’re able to engage with all six C’s.

For example, we created the free ScratchJr coding app, in collaboration with Mitch Resnick at the MIT Media Lab. ScratchJr is a playground in that it promotes problem-solving, imagination, cognitive challenges, social interactions, motor skills development, emotional exploration and making different choices. Crucially, we make explicit the connection between the activity of coding and the playfulness of the experience.

At the playground, children can visit the sandbox, the swing or the slide, or just run around. Similarly, you want to find tech toys that let children engage in lots of different creative and expressive activities. For example, beyond coding, an app might let them create and modify characters and record and play their own voices and sounds. A playpen, instead, might let them move up across levels only when they solve a particular problem or select the right number or letter.

Caregivers don’t exclusively take children to the playground. There are other places to visit and other skills to develop. But, when getting new technologies for young children, you’re looking for a tech playground and not a playpen.

We live in a world where facts and fiction get blurred
In times of uncertainty you need journalism you can trust. For only R75 per month, you have access to a world of in-depth analyses, investigative journalism, top opinions and a range of features. Journalism strengthens democracy. Invest in the future today.
Subscribe to News24
Related Links
"It just tastes nicer": 3D printed school dinners?
Do you want to study arts and humanities but your family is against it? Read on
STEAM not STEM: Why our future scientists need arts training
Next on Parent24
Court order offers reprieve for some childcare centres, but the struggle is not over yet