F*ck, Now There Are Two of You launches this week (Warning: Adult language) 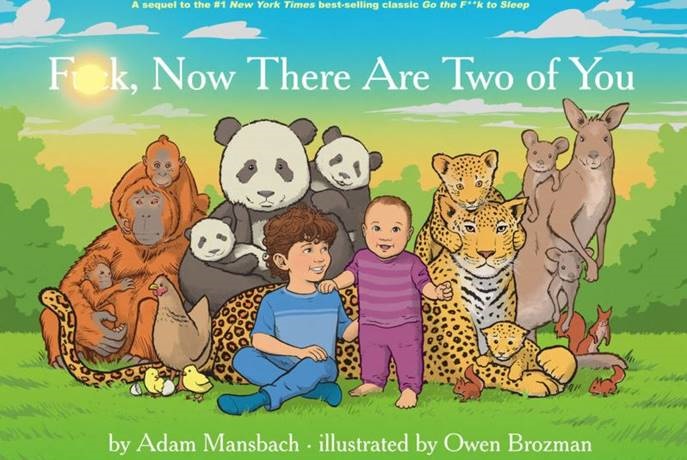 F*ck, Now There Are Two of You (www.akashicbooks.com)

Parenting is hard, and some of us find solace in a glass of wine, or in locking the bathroom door for two minutes... or in letting off steam with a few choice words.

American author Adam Mansbach is a parent with a penchant for the latter, and is now pretty famous for his best-seller Go the F**k to Sleep. On his publishers website he shares how he read the as-yet unpublished manuscript at a museum one evening in 2011, and woke the next day to find "the still-nonexistent book rocketing to the top of international best-seller lists."

He also penned the popular sequel You Have to F**king Eat, which "breaks the code of child-rearing silence, giving moms and dads new, old, grand- and expectant, a much-needed chance to laugh about a universal problem."

Download: Free PDF copy of You Have to F**king Eat The third in the series promises to address "with radical honesty, the family implosion that occurs when a second child arrives", and is aptly titled F*ck, Now There Are Two of You.

It was inspired by the fact that the author himself had two more kids, less than two years apart.

Anyone with two (or more) little ones will know that face-palm feeling of "what have we done?" which is well summed up in this sequel.

The publishers promise that Mansbach "articulates all the fears and frustrations attendant to the simple, math-defying fact that two is a million more kids than one", and as a mom of two littles myself, I'm sure I will relate.

While we wait for the book to land in SA, listen to Stephen Fry read You Have to F**king Eat below, or on YouTube (warning: uncensored):

We live in a world where facts and fiction get blurred
In times of uncertainty you need journalism you can trust. For only R75 per month, you have access to a world of in-depth analyses, investigative journalism, top opinions and a range of features. Journalism strengthens democracy. Invest in the future today.
Subscribe to News24
Related Links
READ: The best detective (In English, IsiXhosa, IsiZulu and 3 other languages)
Nal'ibali celebrated as sole African honoree at the 2019 Library of Congress Literacy Awards
Parents can help kids catch up in reading with a 10-minute daily routine
Next on Parent24
Browse local children's stories in all official languages