13 Reasons Why: Season 2 is chillingly honest and completely terrifying The second season of the Netflix show is more gripping than the first, and has a stronger positive message to teens dealing with the shows themes.

In 2017, Netflix premiered the first season of what soon became one of the most tweeted and talked about television shows of the year, 13 Reasons Why. And understandably so, with its heightened interest in teen issues and emotionally charged performances and dialogue, it was a show young adults could truly engage in and relate to.

The show followed Hannah Baker, a 17-year-old girl who, after committing suicide, explained why she decided to take her life posthumously in the form of 13, 90s-style cassette tapes. Each tape was addressed to someone at school responsible for her dying by suicide in her family home.

This, of course, raised all sorts of concerns among parents and educators, who worried that the show both romanticised suicide, making it seem like a viable option for those experiencing these particular issues, while also being a potential trigger for teens dealing with bullying, mental health and rape.

While co-producer Selena Gomez explained, “We wanted to do it in a way where it was honest, and we wanted to make something that can, hopefully, help people, because suicide should never, ever be an option," ironically the content of the show and the sheer honesty of it, initially do make those teenage years look awfully hopeless and those living through it completely helpless.

After watching Season 2, I first thought that if parents considered the first season a bit much, then season 2 would be downright terrifying.

Liberty High School as a reflection of society

The narrative for the second season is established early on: Hannah’s mom, Olivia Baker, holds Liberty High School accountable for not intervening in the bullying at the school, and subsequently takes them to trial. As the trial progresses, the students mentioned on the tapes are called on and secrets are revealed as they deal with the aftermath of Hannah’s suicide. The season seems slow at first, but similar to the first season, it concludes showing the hopeless and harrowing nature of one’s teenage years.

The level of bullying, the brutal rapes and the “honesty” of which Gomez speaks, seem exaggerated at best to captivate its teen audience. There were scenes closer to the end of the season that I found particularly difficult to watch, and I thought the show could not possibly be rated 16+. Many of the characters in the show are bullied in an effort to keep them quiet during the trial. (Netflix)

But that was until I truly thought about the characters and drew parallels between this fictional, toxic high school and the actual high schools we’re sending our children to every day.

The show seems to have mirrored the Brock Turner case case, which saw a jock allegedly raping an unconscious girl behind a dumpster, only to receive six months – of which he served only three – because a just sentence would ruin the wealthy, white, blonde-haired boy’s future as an athlete. True story. 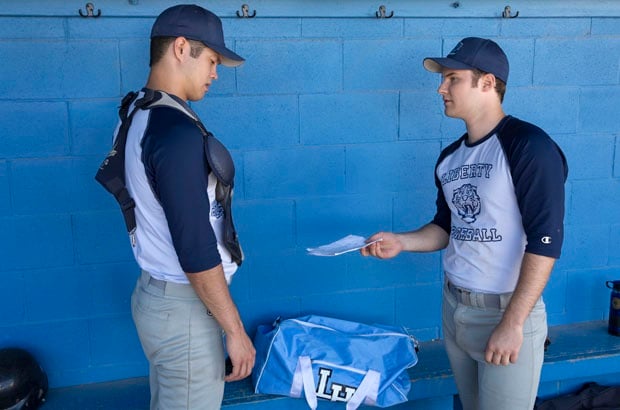 Justin Prentice plays Bryce Walker (left), the school jock whose storyline seems to mirror that of Brock Turner's in every way. (Netflix)

It seems to have mirrored case after case of the troubled, mentally unwell teens that eventually shoot up a school – remember US teen Emma Gonzalez and her classmates who asked why schools hadn’t intervened before the Parkland, Florida school massacre and calling “BS” on the lack of gun control in America.

So although I thought a 16-your-old would be way too young to watch some of these scenes, my research revealed that incidences like these actually do happen in South Africa, and they happen often.

Maybe that’s exactly why parents, educators and teens should actually be watching it.

Season two and its resources

Since Season 1 aired, the producers have addressed the concerns of educators and parents: they've provided teens with resources to help them deal with the gritty issues, and they've shown they're being mindful of the underlying message of the show.

Netflix has put together a Discussion Guide for dealing with anything from depression to rape, which can help teens cope with particular problems while providing educators with a way of addressing these problems. They’ve also set up a website that encourages teens to seek help within their particular country by providing them with local help lines. Netflix further plans on releasing a set of videos, known as the Discussion Series, in which the cast and crew address the show’s themes.

The season does conclude highlighting three very specific things we can take from the show:

1. Schools need to do more;
2. Parents, as involved as we think we are, need to be even more so; and
3. As hopeless as teens think things are, there’s always another way.

The message in the last episode seems to echo that of the very first. In episode one we see Clay at a tattoo parlour, getting a semi-colon on the very spot Hannah chose to cut and take her life: his wrists. The significance of the punctuation mark in writing, as described by Project Semicolon, is when “an author could’ve chosen to end their sentence, but chose not to... The author is you and the sentence is your life.”

Although it takes Clay a while to truly understand what Hannah did and to stand in solidarity with his lost friend, his character eventually shows that you can work through the pain and suffering, perhaps finally highlighting Gomez’s vision for the show. So as chilling as it is to watch, it might be the show our teens really need to.

Clay eventually finds himself in the final episode standing alongside Hannah’s mother, who too finds peace. She turns to him and says, “No matter how many reasons there might be why, there are always more why not."

Did you allow your child to watch the first season of 13 Reasons Why? Would you? Have you spoken to your child about mental health, bullying or any of the themes in the show? How did you have the discussion with them? Tell us by emailing chatback@parent24.com and we may publish your comments. Do let us know if you'd like to remain anonymous.

We live in a world where facts and fiction get blurred
In times of uncertainty you need journalism you can trust. For only R75 per month, you have access to a world of in-depth analyses, investigative journalism, top opinions and a range of features. Journalism strengthens democracy. Invest in the future today.
Subscribe to News24
Related Links
13 reasons to talk about teen suicide
13 Reasons Why’s Brandon Flynn has a message for you and it’s that “you’re a bully”
Bullying: what we learnt in 2017
Next on Parent24
Is my teen lying to me?