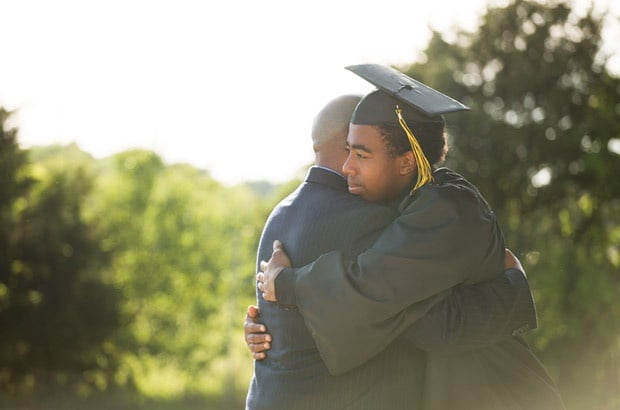 A new study proves that youth with positive future orientation are significantly less likely to report threatening or injuring someone with a weapon.

Youth violence is pervasive and has serious consequences for teens’ health and well-being. Based on a recent Centers for Disease Control and Prevention survey of 9th to 12th graders in the U.S., 1 in 6 youth report carrying a weapon in the past 30 days, and 1 in 4 report being in a physical fight in the past year. Each year, over 200,000 youth seek care in emergency departments across the U.S. for assault-related injuries. Male teens in lower resource urban settings bear the highest burden of exposure to violence.

As an adolescent medicine doctor and researcher, I study how we can protect teens from violence. Most research has focused on factors that increase risks for violence, yet we know much less about factors that protect teens. According to new research my colleagues and I published in JAMA Pediatrics, having a positive outlook on the future may protect male teens from violence perpetration.

Positive future orientation means having high hopes and plans for the future. This could include a broad range of ideas, such as plans to go to college, to pursue a certain career path, to excel in extracurricular activities, or to be engaged in improving one’s community.

Previous studies have linked positive future orientation to many important positive outcomes for youth, including doing well in school, avoiding illicit substances, and being less likely to engage in risky sexual behavior. This motivated our team to ask, “Can a positive outlook on the future protect teens from violence?”

To study links between future orientation and violence perpetration, we surveyed 866 male teens between the ages of 13 and 19 in lower resource neighborhoods in Pittsburgh. All of the teens were part of a community-based sexual violence prevention study.

We asked them a series of questions before they started the intervention program about their aspirations, goals and contributions, as well as about their involvement in violence. For example, teens answered, “I trust my future will turn out well” and “It is important to me that I reach my goals.”

Just over half, or 58%, of teens in the study had positive future orientation based on their answers to seven survey items. They answered that survey items such as, “My life will make a positive difference in the world,” were “a lot like me” or “exactly like me.”

What do the findings mean?

I believe our findings, together with the work of other researchers and practitioners, show that it is essential to combine interventions that strengthen future orientation with meaningful opportunities for youth to engage in their communities and achieve their identified goals. In doing so, we can provide all teens with the opportunity to thrive.

Do you find that when your family sets specific goals they tend to thrive? What works for you and your children? Tell us by emailing chatback@parent24.com and we may publish it on the site.

We live in a world where facts and fiction get blurred
In times of uncertainty you need journalism you can trust. For only R75 per month, you have access to a world of in-depth analyses, investigative journalism, top opinions and a range of features. Journalism strengthens democracy. Invest in the future today.
Subscribe to News24
Related Links
Schools turning into violent playgrounds
Vote, take risks, be fearless: Celebs offer advice to grads
How lab coats help students see themselves as future scientists
Next on Parent24
Your baby's brain explained | 'Turbo-charged feelings': The teen years

Read more on:
positive parenting
Events
WATCH | 'He died at the school': Local experts unpack the issue of school bullying