Just north of Paris lies Parc Astérix, where you can experience the ancient world as it should have been. The rides, shows and characters were inspired by ancient Greece, Egypt, Rome and France – though not quite as your history teacher taught it! You can try your hand at Caesar's spy recruitment test, take a ride on the ghost train, experience daily life in Asterix's village and enjoy roller coasters, water rides, carousels and mini-trains. These Gauls sure are crazy about fun!

The Wizarding World of Harry Potter Harry Potter may not have been around when I was young, but it certainly brings out the little witch in me. At the Universal Studios theme parks in Florida, Japan and soon California, you can visit Hogwarts, Hogsmeade or Diagon Alley. You can enjoy a butterbeer at The Three Broomsticks, buy a wand at Olivanders, watch a Quidditch match or get a little too close to the Whomping Willow. Even muggles are welcome! (Though perhaps not Uncle Vernon.) Finland's Moomin World has been named one of the world's best theme parks for kids. It doesn't have any rides, but you can immerse yourself in the Moomins' world: explore their 5-storey home, visit the the Groke's house (if you dare), have a swim on the beach, do some fun crafts at Sniff's workshop or sit around the campfire with Snufkin. At the Legoland theme parks across America, Europe and Asia you get to experience just how awesome everything is when it is built out of millions of Lego blocks. There are mini model villages with famous landmarks built entirely from Lego, educational activities and lots of fun rides (which, thankfully, are not built out of Lego).

Maya the Bee and Vicky the Viking at Plopsaland 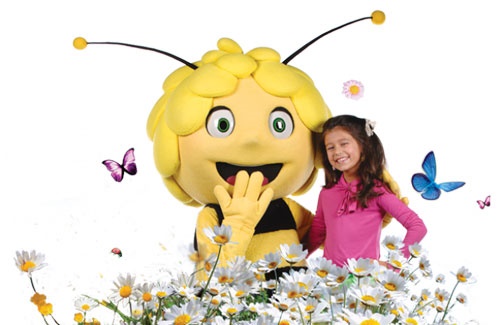 Remember Maya the Bee and Vicky the Viking? They were popular friends on South African TV screens in the 1970s and 80s, and they are very much alive at the Plopsaland theme parks in Belgium, Germany and the Netherlands. Bring out your inner Viking (or insect) and shake hands with Vicky and his dad Halvar, join Maya and Flip the Grasshopper on the flower merry-go-round or get stuck in Thekla the spider's web. Now that's a bright idea worthy of Vicky himself! Since Disney has bought the rights to Star Wars, they've gone all out in bringing that galaxy far, far away closer to home. It will come even closer once Disney's new Star Wars resorts in California and Florida have been completed. The setting for these parks will be a planet right on the edge of the galaxy, where droids and fantasy beasts roam. There will be Millennium Falcon rides, a Mos Eisley-style cantina and much more. Construction only starts in 2016, but in the meantime you can rub shoulders with Jedis, wookies and even Darth Vader himself at Disney's existing parks.

Fancy a cup of coffee instead of a ride on the roller coaster? You can visit your favourite characters at several themed coffee shops and restaurants across the globe. They're especially big in Asia, but are fast spreading to Europe, Australia and America. There are several Hello Kitty Cafés, Moomin Cafés, Charlie Brown Cafés and a Little Prince Creamery dedicated to Antoine Saint-Exupéry's classic tale of childhood, friendship and adventure. Not only are the decor and menus inspired by these stories (Linus' raspberry pancakes, anyone?), but at the Moomin cafés you can even sip your latté in the company of giant stuffed Moomins. Every bit as thrilling as a day at the theme park, but without the entrance fees and queues!

Read more on:
harry potterlegostar wars
Events
Locals encouraged to tell their homegrown stories to ignite a love for reading