A beautiful young woman enters the room to a whoop of cheers. There are cameras and we’re live on air.

Not only are quadruplets a rare occurrence, but Inga conceived hers spontaneously, that is without fertility treatment, which only occurs in 10% of quadruplet pregnancies.

She carried them to 29 weeks until the medical team at Tygerberg hospital decided to schedule a semi-elective caesar for the morning of 6 July, so they had time to quickly pull a full team together. If they didn’t do that, Inga would have had to have an emergency c-section later that day and the staff may not have been on hand.

The obstetrician who delivered the babies via c-section, Dr Celeste van Drunick, told us that everything “went very, very well, from start to finish.” The whole procedure took only 20 minutes, she said, from when the knife went in to when Inga was stitched up. Each baby had its own paediatrician in the theatre – there had to be four of everything else too, nurse Lusanda Nduneni, chuckled. She told us how she had to ensure there were four cribs, four draggers with oxygen and four incubators down to four blankets and four beanies in the theatre. Assistant manager nurse Jennifer Sapto said Lusanda was a real star, pulling it all together.

“Everything was just extra, extra, extra… extra exciting too!” Lusanda told us. “Not just on the day, but for a whole week!

“Inga was so excited to meet her babies and she was laughing and joking in the ward. It was crazy busy but also super-exciting, and the babies were a real blessing.” How are the babies doing?

Dr Lizel Lloyd, the neonatologist who still looks after the four babies in the neonatal ward, said that they’re doing really well. “The girls are still on oxygen, but the boys are already on kangaroo care on mom Inga’s chest. And she’s expressing milk for all four of them,” she added.

In hospital, the babies are known as A, B, C and D, but mom Inga knows exactly who’s who.

When they weigh 1.8kg, they may be ready to go home, Dr Lizel said. After hearing about Inga's spontaneous quadruplets on the news, Darren Simpson from Kfm 94.5’s breakfast show immediately said they needed to do something, Sherlin told Parent24. Being a father of two himself, he recognised what a huge responsibility four babies were for one mom.

And when Darren, Sherlin and Sibs found out that Inga hadn’t even had a baby shower, the gears clicked in motion. They immediately decided they’d be the “honorary aunts and uncle” and offer long-term support and love to the babies.

“She’s a first-time mom, she needs a baby-shower!” Sherlin told us. “We know Capetownians have big hearts, we knew they’d help. We went baby shopping and was shocked at the prices of baby stuff! That’s for one baby, imagine four!” 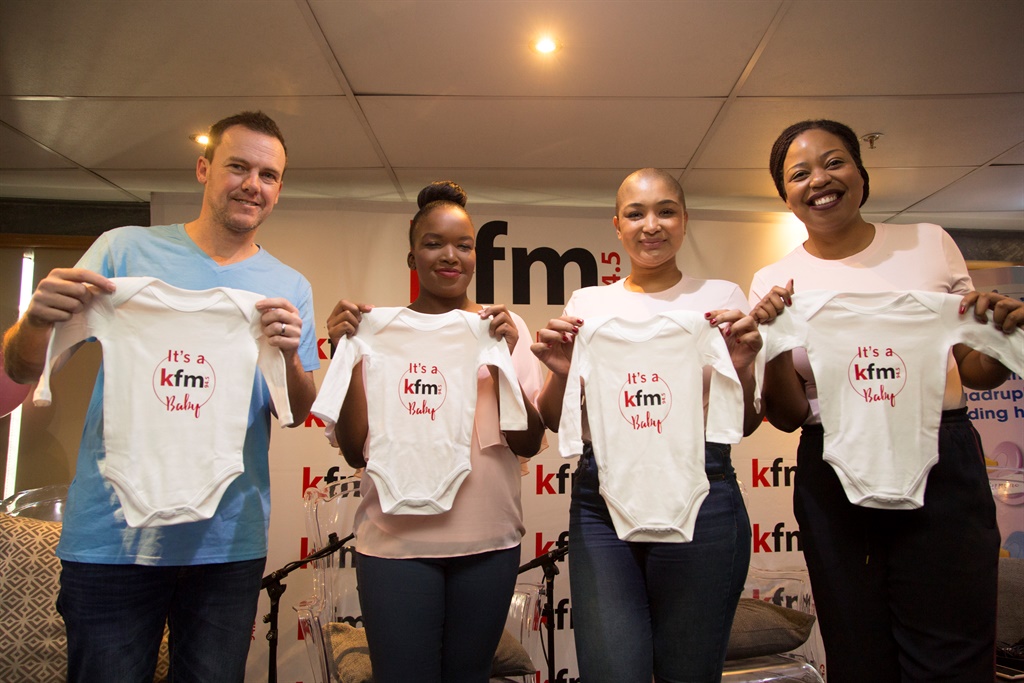 The first support came from LottoStar, which will donate R10 000 per month for a year to help Inga cope financially. Then the team approached the Clicks Helping Hand Trust, and listeners were able to donate baby goods at four big Clicks stores around Cape Town. One donations box was standing at the baby shower, overflowing with nappies, soft toy bunnies, feeding bowls and everything Inga and her babies may need. Three boxes were still to come, and Donna Davids, the CSI coordinator at Clicks, promised to match the donations and supply baby clothes for a few years.

“But it’s the amazing customers and staff who we need to thank for all the donations,” Donna told us. “It takes a village to raise a child, they say, and Inga is the hero here, we send her lots of love and strength, and we will be here for her.”

“I have no idea where to put everything!” Inga gushed, but the Kfm 94 .5 Morning crew promised to help with the logistics.

Catching up with the new mom

Inga’s family was also at the pretty pink-and-blue baby shower, which was broadcasted live on air, and we chatted to Inga and her mom.

How was she doing? "Right now I'm nervous because I've never been without my babies for so long!" she said.

How did she feel before the birth? Inga laughed. “I just said let’s get this over and done with!”

Inga said it was her mom who chose their names. Mrs Luleka Mafenuka told us, “The babies are miracles, gifts from God, so I took the names from God.

“We live in a shack in Khayelitsha, and it’s completely flooded at the moment, we need to wear gumboots inside the house,” the grandma said. “But I’m very excited about the babies. We were four, and now we’re eight,” she beamed. You can follow the story of Inga and the “Cape’s Quads” on @KfmZA, who will continue to celebrate their milestones.