IN PICTURES: What Prince William and Queen Elizabeth looked like as babies The eyes of the world are firmly planted on the new royal baby. No news on the prince's names just yet – but we'll keep you posted.

Get royal baby updates on Channel24!

While we wait, we had a bit of fun: here's a look at the royal babies who came before: Let's take it back to Queen Victoria and King Albert of Saxe-Coburg. Here sits Queen Victoria in 1894, holding her great-grandson, Prince Edward Albert Christian George Andrew Patrick David (later Edward VIII). Standing at the back is her oldest son Edward VII, who became king from 1901 to 1910; and her grandson George V, who ruled from 1910 to 1936 and was Queen Elizabeth's grandfather. Three kings and a queen in one photo – you're welcome.

When baby Edward grew up, he fell in love with the divorced American socialite Wallis Simpson, and was forced to choose between the crown and a "disgraced" marriage. Edward chose Wallace and abdicated in 1936 before his coronation. Good thing too, as it turns out he was a Nazi supporter. Sies. His brother George VI (below) picked up the pieces. Little Prince Albert Frederick Arthur George at the age of 1. Fondly known as Bertie, he married Elizabeth (Angela Marguerite) Bowes-Lyon, fathered princesses Elizabeth and Margaret and became George VI in 1936 after his brother abdicated. Remember the beautiful movie The King's Speech? This was he. The Duchess of York, Elizabeth Bowes-Lyon, who later became Queen in 1936 and then Queen Mother in 1952, with the unsuspecting baby Elizabeth Alexandra Mary. A cheerful Princess Elizabeth of York aged 1 in 1927. A very young Elizabeth had to accept the crown when she was only 25 years old upon dad George's death, and she's since become England's longest reigning queen, celebrating her 92nd birthday this Saturday past. A two-month-old Prince Charles Philip Arthur George lying in his basket at Buckingham Palace, in January 1949. Charles's wedding to the people's sweetheart Diana Spencer in 1981 was broadcasted to an estimated 1 billion people worldwide. They had princes William and Harry. The marriage officially ended in 1996, and a year later Diana died in a car accident. In 2005, Charles was permitted to marry Camilla, herself a divorced women, breaking the long history of the Church of England's ban on such marriages. Prince Charles is first in line to become King, but the Queen may hand the crown to Prince William instead. 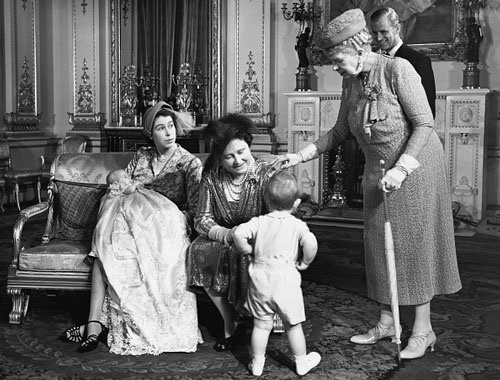 The Prince and Princess of Wales, Charles and Diana, introducing their firstborn, William Arthur Philip Louis, to the world on the steps of the Lindo Wing of St. Mary's Hospital in 1982. At home at Kensington Palace, Diana and Charles pose with baby William in 1982. You see it's him, can't you? Prince William, Duke of Cambridge and Catherine, Duchess of Cambridge, present George Alexander Louis a day after his birth at The Lindo Wing of St Mary's Hospital 23 July 2013. Many have said that her blue polka-dot dress is a respectful nod to her late mom-in-law Diana's dress (see above) when William was first shown to the world. A dapper Prince George sits for his official Christmas picture in a courtyard at Kensington Palace in late November of 2014 in London, England. He is now number three in line to the British throne, after dad William and granddad Charles.

Credit: Photo by The Duke and Duchess of Cambridge/PA Wire via Getty Images Catherine, Duchess of Cambridge and Prince William, Duke of Cambridge leave the Lindo Wing at St. Mary's Hospital, London, with their newborn baby daughter on 2 May 2015. Charlotte with mom Catherine at a children's party during the Royal Tour of Canada on 29 September 2016 in Victoria, Canada. Dare we say she looks a bit like nanna Elizabeth?

Princess Charlotte is fourth in line to the throne. A new law passed in 2013 has overhauled the old order of succession and allows her to maintain her position to the throne even if another baby boy is born.

The Duke and Duchess of Cambridge leave St Mary's Hospital in London with their new arrival, a baby boy. Their Royal Highnesses have thanked all staff at the hospital for the care and treatment they have received, and thanked members of the public for their warm wishes.

The new baby prince is now fifth in line to the throne.

Who will the next royal baby look like and what do you think his name will be? Tell us below.

Read more on:
royal baby
Events
Sasol is looking for bursars for an all-inclusive bursary for 2023 - Apply now