Maddy, a mother of two, reached out to Parent24 to tell her story about the life-changing chiropractic care that saved her daughter.

When Maddy gave birth to her second child she noticed the baby had a lazy eye, but she paid no mind to it because she assumed it was normal.

"As time progressed I noticed nothing had changed with the eye, and I also noted how skew her head was," she told us.

When the concerned parents went to a peadiatrician, he said to them, "These things happen." He told them that they should not be too concerned about it, adding "It will correct itself and things will be completely normal."

Maddy, still concerned and frustrated despite what the peadiatrician had said, started doing research and found an article on Parent24 where a parent shared their experience with Flat Head syndrome.

"I identified with the article because the parent said the pediatrician told them something similar. The pediatrician also told us to comb our daughters hair a certain way to help with the correction of her head shape," Maddy shares.

The combing of the hair a certain way had not helped at all. 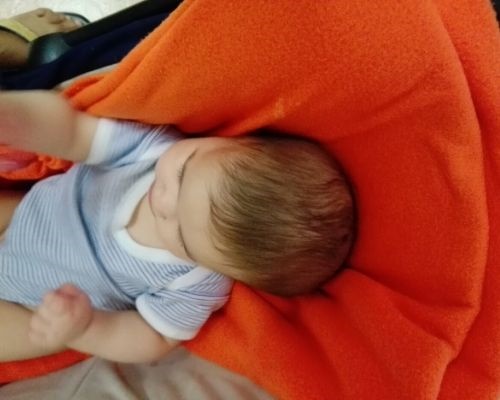 In fact, it only got worse.

Maddy decided to contact Operation Smile, who put her in touch with the Red Cross Hospital.

Plagiocephaly develops when a baby spends too much time lying on their neck or back, which as a result causes a flat spot on a baby's head.

Like the pediatrician, they repeated that the issue will correct itself. Simultaneously, the doctors suggested they must consider the helmet.

The helmet is put on the baby's head and assists with the adjustment of the head shape. The helmet worn by the baby in the picture is an example of what it looks like. Maddy's daugther not pictured (Shutterstock).

"The helmet is very expensive, very painful and it was only available in Pretoria. I started preparing for a trip to Pretoria until I heard you need to regularly go there and this was not by any means possible for my family and I," Maddy says.

The doctors also said that there is a chance that the helmet might not work, but should they decide to go that route the development will be measured in six months.

Nights became restless and filled with anxiety for Maddy and her husband.

However, they did not give up. 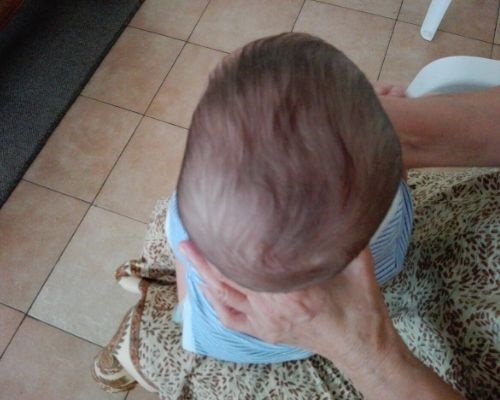 Maddy's daughters head before she started with chiropractic care.

They continued with research and on their quest came across a chiropractor, Dr. Megan Hope, who deals with Plagiocephaly.

"I was so shocked because I could not understand how a chiropractor could help. I contacted her nonetheless to book an appointment," Maddy says.

At this point Maddy's daughter was six month old and her head was extremely skew and her eyes entirely squint.

Megan says, "In the case with Maddy's daughter there was obvious deformational plagiocephaly, which meant addressing not only the restrictions in her cranium, but her entire spine."

Her chiropractic care therefore included correcting any joint restrictions in her pelvis, lower back, upper back, with special focus on her neck and cranium using gentle adjustments and cranial mobilizations, she said, which in turn reduced meningeal tension, and allowed her nervous system to function better.

With amazement and sheer excitement Maddy shares how impressed she was with the chiropractic care, "After her first session with Megan the squint was corrected. I can't really explain what she does, but it is such a gentle process."

Megan says the chiropractic adjustments used on babies and children are specific, non-invasive and very gentle. A chiropractic care session with Megan.

"After a few sessions my daughters sight got better and her head shape has improved rapidly. When she wears a sunhat it fits perfectly and isn't skew," Maddy shares excitedly.

What the treatment plan included

The treatment plan Megan used for Maddy's daughter included chiropractic care of 6 to 8 times per month, each session being about 20 minutes. The development after a few sessions of chiropractic care.

This means her parents had to alter her head position while she's sleeping, tummy time exercises on a swiss ball to strengthen her neck and back muscles, as well as vitamin supplementation," Megan says.

She continues, "Maddy's daughter started with chiropractic care at the age of 6 months, with most of the foundation work being done in the first few months. She's currently on a maintenance plan until her fontanelles close at 2 years of age."

The little girl has responded incredibly well to chiropractic care, besides seeing a visible improvement in the general symmetry of her skull and face, she has also hit all her milestones thus far (plagiocephaly is associated with delayed milestones) and she continues to amaze everyone with her recovery.

"Chiropractic care has changed this little girl’s life in an astounding way," Maddy says, "For parents who think this is a cosmetic thing, it's not true. My daughter is very smart but I could see the plagiocephaly affected her development so immensely and it was not pleasant to see."

She explains she has chosen to share her story because she does not want parents to be discouraged if they are going through a similar experience, because there is another treatment for it: chiropractic care.

We live in a world where facts and fiction get blurred
In times of uncertainty you need journalism you can trust. For only R75 per month, you have access to a world of in-depth analyses, investigative journalism, top opinions and a range of features. Journalism strengthens democracy. Invest in the future today.
Subscribe to News24
Related Links
Flathead syndrome
What is flat head syndrome?
‘Our baby had a flat head’
Next on Parent24
WATCH | Cardi B reveals her four-month-old son is already speaking