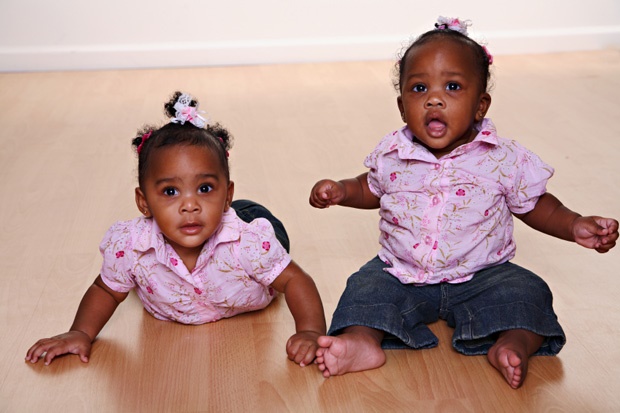 All too often, the response to “We have twins” is a sympathetic grimace, worried questions about financial planning or a cheesy: “Double the trouble, eh?” As these proud parents reveal, having twins and triplets can be a joy – for reasons that may surprise you. Here are their top ten reasons why.

Pregnancy is an incredible experience, but it’s also a roller coaster of hormonal ups and downs, and a physical strain – even more so if you’re carrying more than one baby. Jo’burg mommy-to-be Candice Jones, who is expecting twin boys, shares what it was like when they got the news: “We went through a rush of different emotions in about three seconds – from ecstatic to terrified! But once the shock had settled, we realised just how lucky we were.

Jon and I wanted two children, and being over 30, having them in one go has its advantages. And while it may seem a little selfish, the strain on my body only happens once, albeit with more severity. We can’t wait to meet our little ones!”

It’s a special kind of feeling – enjoying the weight of your babies, one nestled on either side of you. Mercy Mathews explains it: “Whether you’re cradling them together in each arm or holding their hands in each of your hands or snuggling with them by being sandwiched between them, these moments are magical!”

With an age gap, you could still be changing nappies for one while planning how to go about that “birds and the bees” talk with another. Without the age gaps in their brood, mom and dad find it easier to focus on parenting their twins and triplets through each phase of growing up.

For instance, teaching your toddlers how to eat with a fork together might make for chaotic mealtimes, but at least you only have to go through the phase once. (Just imagine the competitiveness on a potty training star chart!)

Another perk of having multiples is that you know when one starts walking, the other’s first steps aren’t far away. Vickie Whitehead shares: “Alexander was born weighing 2.2kg and Jonathan 1.6kg. For many months Jonathan was a few weeks behind Alexander on his milestones.

We got to a point where Alexander would hit a new milestone, and we would say, ‘Well Jonathan will catch up in a couple of weeks’ time’, until suddenly at 11 months, Jonathan started crawling before his brother.?We were very surprised, and it took Alexander a week or two to catch up!”

The number one reaction when a couple finds out they’re expecting more than one baby? Panic stations! “How are we going to afford an extra kid?” While having multiples is certainly more expensive, there are discounts aplenty, and you should take advantage.

School fees can be up to 20 percent less if you have more than one child attending. Some medical aid schemes only charge for one child, or the first two children. And moms can pile the shopping trolleys high with two-for-one
and buy-two-get-one-free specials on items from T-shirts to lunch box snacks.

There’s a kinship between multiples that is hard to define. From “twin telepathy” to secret languages to private jokes, their bond is something mysterious and wonderful.

Shelley Hutton, mom to identical twins Dylan and Ethan, tells: “It was hilarious last year when the boys kept their roles in the school concert a secret. They thought they were being extremely clever about the whole thing. When we asked them, ‘So, what are you singing?’ they’d answer together ‘Poop!’”

Multiples are far less likely to shout out: “Mine!” That’s because, out of necessity, they learn to share at a much earlier age. It’s more than swopping out clothes and trading toys, they share that highlight of every child’s year – a birthday.

They also have to share mommy and daddy’s attention. Sharing is a life skill that teaches us to be more selfless and nurtures a generous heart. This is one of the biggest pluses of having multiples.

Having a twin or being part of a “trip” means never being alone. Bernice le Roux says that her five-year-old twins Luke and Mika tend to be protective over each other. “For instance, if one of them gets hurt, they will tell the other one or the teacher. Luke will always come and tell me that Mika got hurt before she does. They don’t gang up on other kids; it’s more of a deep love for each other.”

According to the National Center for Health in the US, thanks to fertility treatments and a trend of women having children later in life, the incidence of twins has doubled in the last 30 years, to 3.3 percent of all births.

Still, having twins (triplets and more!) is considered a rarity. As author Pamela Prindle Fierro, admits: “I get a little thrill of pride in being a mom of twins. It’s like being a part of an elite club. You feel an instant bond with other parents of multiples... It’s almost like we enjoy an exclusive status in the parenting world, earning a slight nod of respect for pulling double duty.”

Parents of multiples often describe how fascinating it is watching their children grow up side by side, especially if they’re identical, and see them develop their own personalities. Michaela Jean Curtis says that her twin girls are like chalk and cheese.

“They are like one complete person split into two. One loves healthy food while the other loves her carbs. The smaller one sticks up for her sister big time, while the bigger one is a pacifist! The one is extremely sporty while the first born loves painting and reading. They love each other so wholeheartedly that it doesn’t matter that they have nothing in common.”

We live in a world where facts and fiction get blurred
In times of uncertainty you need journalism you can trust. For 14 free days, you can have access to a world of in-depth analyses, investigative journalism, top opinions and a range of features. Journalism strengthens democracy. Invest in the future today. Thereafter you will be billed R75 per month. You can cancel anytime and if you cancel within 14 days you won't be billed.
Subscribe to News24
Related Links
This is how twins are created
Seeing double
Next on Parent24
WATCH | Cardi B reveals her four-month-old son is already speaking