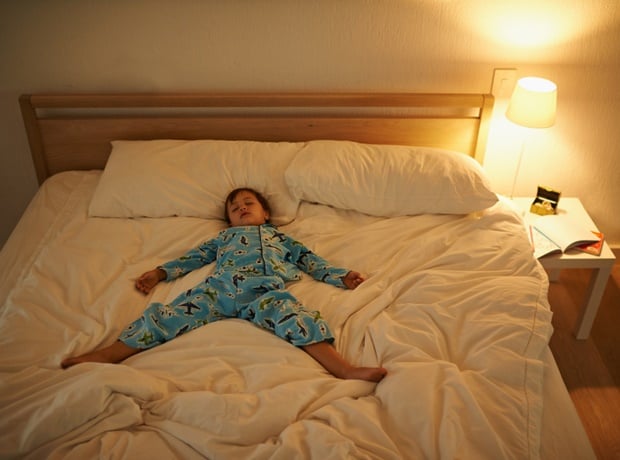 Wondering why your toddler can't fall asleep at night?

The screen time debate is one many parents are familar with, and an issue many remain worried about.

'How much is too much?' and 'Is going completely screenless really a good idea, since the future is digital?' are just some of the leading arguments.

But according to Good Night Sleep, a local child and baby sleep consultancy, more than anything else, parents should be aware of the impact screen time has on a child's brain as well as the developmental delays that may result if your toddler spends too much time looking at a one.

"Have you ever tried to take a tablet/phone away from a two-year-old? It's not met with the kindest of reactions, and the reason is that dopamine stops getting produced in the brain and there is no immediate response to stimuli," explains Good Night Sleep Consultant, Raylene de Villiers.

"The tantrum from taking a screen away from your toddler is due to the fact that they have become so used to the instant gratification that a screen can provide, that they then struggle to readjust to "real" life again," she adds.

This screen time induced battle with adjusting to "real" life can also be seen in a child's social development, which, de Villiers says, could be stunted irreversibly.

"The frontal lobe develops during the critical period between birth and 3 years of age, so if your child is in front of a screen for extended periods of time, they are missing out on developing relationships with people – playing, talking and interacting with real people, the effects of which may last forever," warns de Villiers.

When your toddler struggles to fall asleep at night, the culprit is usually too much screen time, which impacts the body's production of melatonin which peaks between 5 pm and 7 pm.

"Melatonin is our helping hand at night and using a screen in the crucial hours that it is being produced is counter-intuitive to better sleep," explains de Villiers, who also points to screen blue light as disruptive to melatonin production.

"The blue light that is emitted from a screen is of a shorter wavelength than the red or yellow spectrum and stimulates the brain, reducing melatonin in the process."

While we cannot keep our young ones away from screens, placing limits is crucial, and de Villiers advises being deliberate about when and how your toddler engages with a screen.

According to the World Health Organisation screen time guidelines are:

Children under the age of 2 years old should have ZERO screen exposure, unless it's via a video call to family and then it should be kept brief and preferably not just before bedtime.

Children from the age of 3 years old may watch a screen for a maximum of 1 hour a day.

"Instead of switching on a screen to distract your toddler during dinner time, instead show them a book or make up a dance that the whole family does when your toddler eats well," de Villiers says.

"Put on some music, draw on a whiteboard, and get creative. Be sure to instil a culture of 'no screen time' at meals for the benefit of better-quality sleep for the whole family!"

We live in a world where facts and fiction get blurred
In times of uncertainty you need journalism you can trust. For 14 free days, you can have access to a world of in-depth analyses, investigative journalism, top opinions and a range of features. Journalism strengthens democracy. Invest in the future today. Thereafter you will be billed R75 per month. You can cancel anytime and if you cancel within 14 days you won't be billed.
Subscribe to News24
Related Links
Toddlers missing milestones due to too much screen time
Addressing SA's reading crisis may start with screen time
Parents respond: You can blame the “idiot box” for 50% of children having never read a book with...
Next on Parent24
Has your toddler started sleeping like a newborn again? Here's why