Do your kids watch scary movies? 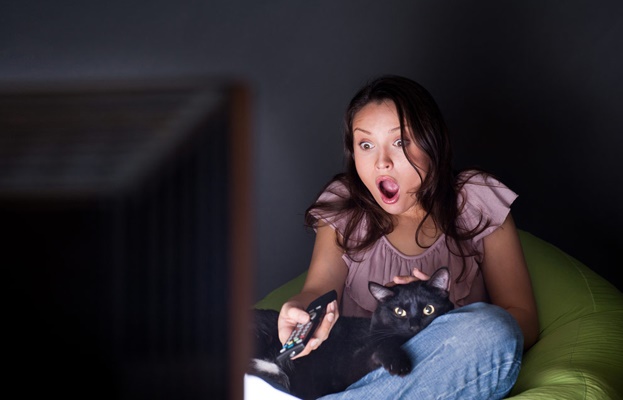 For many of us as adults, movies like Chuckie and Gremlins seem pretty silly now, perhaps even funny.

In fact, some of today's kid’s movies seem far scarier than a lot of the horror movies we’d watch as children. But at the time some of these movies did have an effect on us as children and it’s important to remember that when considering whether or not your child is ready to watch their first scary movie with you.  Although most scary movies have an age restriction of 18+, let's refer to the ones that don't.

Read more: Is that movie okay for my kids?

When I think back to the first time my parents allowed me to watch Gremlins I remember feeling somewhat disturbed and frightened for months after that. Yet the thrill and excitement of watching more scary movies seemed fun, even though it led to sleepless nights where I wouldn’t be able to sleep in my own bed.

I was also allowed to watch the X-Files with my parents. For some reason I was drawn to the programme but after watching a few episodes about aliens coming to earth to take small children away for experiments, I vowed never to watch it again. I would wake up in the early hours of the morning and sneak into my parent’s room and sleep in their bed for weeks after that because I was convinced the aliens would come and abduct me.

Things that go bump in the night are already a fear for kids, but extended periods of sleepless nights could link back to a scary story or movie they’d seen. Nightmares, insomnia and fear of the dark are common at some point in childhood, but as Hollywood continues to produce more gory, more realistic and much scarier movies, separating what’s real and what’s not isn’t easy for children.

When is the right time to watch a scary movie with my child?

It’s important to assess whether your child is ready to understand that what they see on the TV screen isn’t real. Every parent has had to explain this to their child at some point and it can be quite a tricky concept for a child to grasp.

Scariness comes from the fear of the unknown. When your child is able differentiate between fact and fiction and you’re sure they know that what they see on TV isn’t real, then they should be able to watch a scary movie with you within age-appropriate boundaries.

In order for a child to understand that there aren’t real people and real events taking place inside the big square box they’re watching, explaining the processes that goes into the making of a movie could help.

Some parents recommend watching the movie without the kids before deciding whether or not the movie is appropriate or not.

Another great way to bring your child to the understanding that the movie they’re watching isn’t real, is for you to put on a brave-face yourself. In scary parts of the movie, it’s comforting for your child to see that it doesn’t make you scared and they’ll be less likely to be as frightened.

When I watched Gremlins for the first time I still didn’t quite understand the concept of movie-making and after being terrified for months my parents eventually sat down and explained to me that there was no such thing as Gremlins or any of the monsters and scary characters I’d seen on TV.

I was instantly cured and it never bothered me again.

Other families might rule out watching scary movies entirely. It’s not a bad idea to push boundaries together sometimes, especially with you there to guide and monitor your child’s response to the movie.

Some children (and even adults) are extremely sensitive to scary or disturbing images and some movies can leave them with a rather unsettling or uncomfortable feeling. Different things will affect different children and it’s not always so easy to know how your child will react. When you think your child is ready to watch a scary movie, give it a try and carefully monitor their reactions and behaviours during and after. If they’re showing signs of upset or confusion perhaps opt for a less graphic or more light-hearted movie next time.

A great workout for the imagination

As a family, watching scary movies together (once I understood that what I was watching wasn’t real) was something I always looked forward to. The thrill and excitement of the spooky sounds, the scary characters and the curiosity of the unknown, whilst snuggled under a duvet in the dark is something I’ve always enjoyed.

Provided that the movie is age-appropriate for your kids, and your children know the difference between fact and fiction, enjoy this as part of your child's experiences and if they're not ready yet, allow them to watch at a later stage when they have greater coping skills to enjoy it more.

When do you think it's okay for your kids to watch a horror/scary movie?

We live in a world where facts and fiction get blurred
In times of uncertainty you need journalism you can trust. For 14 free days, you can have access to a world of in-depth analyses, investigative journalism, top opinions and a range of features. Journalism strengthens democracy. Invest in the future today. Thereafter you will be billed R75 per month. You can cancel anytime and if you cancel within 14 days you won't be billed.
Subscribe to News24
Related Links
Terrifying TV for kids
Television-the great satan
TV and your child
Next on Parent24
'Worry and fear are constant': How to support your child with an anxiety disorder