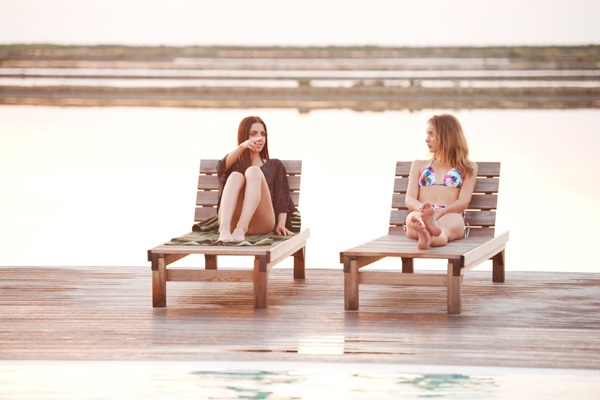 A recent post on quora.com about a parent who wanted to know whether or not they should allow their 13 year old daughter to wear a bra reminded me of my early stages of development.

In school I was the girl who had the unfortunate experience of being teased and cast out by other girls because by the age of 11 I had boobs, body hair and an all-time low self-esteem to go with it.

Read more: Should I allow my 13-year-old daughter to wear a bra?

I remember telling my then best friend that I’d recently gotten my first period. Within hours of telling her the entire grade had found out and for weeks after that it was probably the most talked-about event at school next to the bombing of Planet Hollywood in Cape Town.

Following my first period were boobs and body hair and someone who’d hide in the bathroom stall after swimming practice so that she could change back into her uniform without being made a spectacle of.

Girls in particular were meanest and the growth of my developing body was definitely not a direct reflection of the growth of my self confidence and assertiveness. Unable to accept my changing body parts or why no one else in the grade had started their developmental stages yet, I would sometimes look in the mirror at home in utter disgust and complete embarrassment. What was wrong with me?

My mother had explained the whole process that every girl goes through at different ages to me but I resented that I was the girl who had to go through it first and at an age where most kids found the whole thing weird and gross. Thanks, genetics.

I started skipping school and would cry to my mother for days because I was too ashamed to go. I remember a time when I’d braved going to the beach for another girl’s birthday party (at a very inconvenient time of the month) where I wasn’t able to go swimming with the rest of the girls. As everyone was about to set off and run into the sea I stayed behind and it didn’t take much for the other girls to figure out why I was insisting on not joining them.

The next week at school a drawing had been passed around the classroom that caused a great amount of entertainment at my expense. The scenario was a rather graphic yet poorly illustrated picture based around what the ‘artists’ assumed would have happened if I had gone swimming in the ocean at the birthday party. The picture then circulated the entire classroom allowing others to add to the picture-story of me in the ocean next to a shark that’d just bitten off my left boob because I’d gone swimming during my time of the month. Awesome. I may as well have walked around the school with a massive billboard floating above me that said “If you come too close the sharks might get you too” from then on.

You’d think that the next girl to go through puberty would have received the same sort of treatment, but for some reason (along with all the other things I never understood about hormones) after the next girl had started her stages of development it had become cool if you got your period, boobs and body hair before the end of grade five. In a weird turn of events, the girls in grade six who were not yet wearing a bra or shaving their legs and underarms became the rejects and outcasts.

Being the first kid in the class to go through this wasn't the highlight of my life and I'll never forget the humiliation and torment I went through, even when I tried to laugh it off and put on a brave face.

But once everyone else in the grade had 'grown up' and forgotten about the novelty of teasing the girl who started early, I'd learnt how to toughen up and simply not care about it any more. This took a lot of practice and whether I liked it or not I had to start dealing with the bitchiness no matter how much it hurt.

Has this had any sort of impact on my adult life now? Nah. Well, apart from the fact that if I ever have kids I think I'd much prefer boys, although if I had girls I'd be prepared to give the ultimate tutorial on how to deal with mean girls and early puberty.

What advice do you give your daughter about puberty and early development? Send us your comment to chatback@parent24.com.

We live in a world where facts and fiction get blurred
In times of uncertainty you need journalism you can trust. For 14 free days, you can have access to a world of in-depth analyses, investigative journalism, top opinions and a range of features. Journalism strengthens democracy. Invest in the future today. Thereafter you will be billed R75 per month. You can cancel anytime and if you cancel within 14 days you won't be billed.
Subscribe to News24
Related Links
Bras for toddlers
7 signs of early puberty
Hilariously awkward 'first period' commercial
Next on Parent24
Study suggests video games boost intelligence in children

Read more on:
adolescentsbullyingpubertyhormones
Events
Free webinar on the need to protect children from exploitation