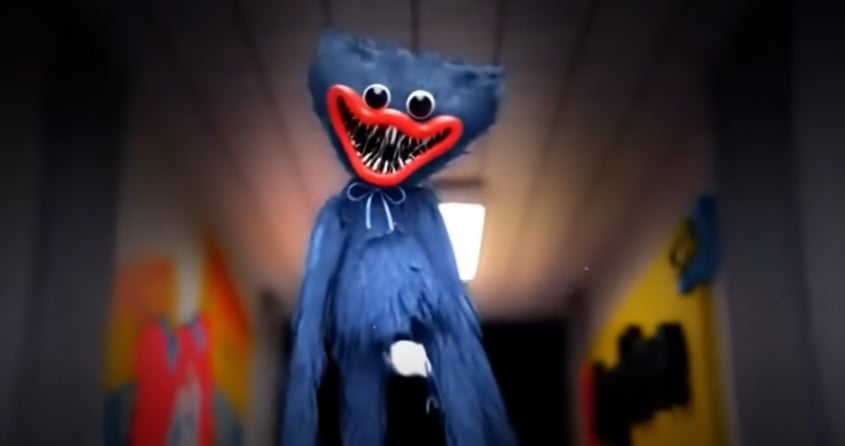 " In one of the videos, the bear asks the viewer to take their last breath". (Oovvuu/Fox 5)

The latest disturbing social media trend is once again proving that just because something sounds kid-friendly doesn't mean it is.

The character has gone viral on YouTube, TikTok and Roblox.

Also read: The psychological impact of exposing children to 'harmful content' and why age restrictions matter

While the name makes the character sound like a missing member of the Teletubbies, it's anything but, with the character inspiring fan-made songs with lyrics including:

"His name is Huggy, Huggy Wuggy. When he hugs you, he'll never stop... He'll squeeze you until you pop".

Thanks to its innocent-sounding name, the character has found its way into popular online content like Peppa Pig.

'The bear asks the viewer to take their last breath'

In the UK, schools are warning parents about the "deceiving character".

"It has been brought to my attention that a character named 'Huggy Wuggy' is being viewed by our children online... The character can be easily viewed on YouTube channels and is a teddy bear with razor-sharp teeth that sings worrying songs about hugging and killing. In one of the videos, the bear asks the viewer to take their last breath. It is a very deceiving character, as hugs should be seen as something kind and loving," wrote one UK principal David Hegarty via Facebook.

Another UK-based principal Justine Brown says that pupils have started mimicking the game on the playground, "hugging and whispering nasty things in the recipient's ear".

'He didn't know the difference between reality and gaming'

For one UK mom Beth Buxton the character has sent her three-year-old into a tailspin after spotting Huggy Wuggy while his sisters played on the gaming platform Roblox.

"He got to the stage where he didn't know the difference between reality and gaming. He tried to climb up my bedroom window, saying he would die and come back to life, telling me that's what Huggy Wuggy does," the mom said, adding that she's now become highly vigilant.

"We have banned Roblox and put locks on YouTube. I have window locks being installed next week because he is still thinking about it. There are numerous terrifying characters in these games".

Watch the video below for more:

US-based Editorial Director of Parents.com Melissa Bykofsky suggests parents address this trend with their children to see if they've been exposed to the character.

"The biggest thing is just communication, making sure that your kids know that if they are scared or concerned about anything they see, anything their friends are talking about, they can come to their parents".

We live in a world where facts and fiction get blurred
In times of uncertainty you need journalism you can trust. For 14 free days, you can have access to a world of in-depth analyses, investigative journalism, top opinions and a range of features. Journalism strengthens democracy. Invest in the future today. Thereafter you will be billed R75 per month. You can cancel anytime and if you cancel within 14 days you won't be billed.
Subscribe to News24
Next on Parent24
Does my child have a reading problem or could he be dyslexic?