Online and out there: how children view privacy differently from adults Is it okay to invade your teen's privacy by checking what they are doing online.

Have you seen the how-to video of a teenage girl styling her hair that went disastrously wrong? She was very disturbed by what happened, yet still uploaded the footage onto YouTube. Do you think a 45 or 50-year-old would upload an equivalent video of themselves?

The majority of young people now share lots of things online that many adults question and feel uncomfortable about: their likes, dislikes, personal views, who they’re in a relationship with, where they are, images of themselves and others doing things they should or maybe shouldn’t be doing.

A study undertaken in the US by Pew Research found that 91% of 12-to-17-year-olds posted selfies online, 24% posted videos of themselves. Another 91% were happily posting their real name, 82% their birthday, 71% where they live and the school they attend, 53% their email address and 20% their mobile phone number.

Children’s fondness for online sharing is a global phenomenon, and in response governments internationally have initiated awareness campaigns that aim to ensure children are more private online.

In the UK, the National Society for the Prevention of Cruelty to Children recently launched a Share Aware campaign. This includes the recent TV advertisement, called I saw your willy, which depicts the ill-fated consequences of a young boy who as a joke, texts a photo of his penis to his friend.

Read: Generation Next: How growing up in a digital world may help or hinder our children’s future

The advert emphasises to children the need to keep personal information about themselves offline and private.

Similarly, the Australian Federal Police have launched Cybersafety and ThinkUKnow presentations for school students, which highlights the social problems that can arise when you’re having fun online.

Adults often interpret children’s constant online sharing to mean that they don’t care about privacy and/or don’t understand the potential longer-term issues. There is some truth to this perspective.

But simply labelling children as either disobedient or naïve is too simplistic. There is an important need to understand why children are overstepping adult-defined marks of privacy online.

In the words of Facebook, our relationship status with privacy can be summed up as: it’s complicated.

Part of the complexity comes down to how privacy is defined. Many adults understand privacy to mean being selective about what one reveals about themselves so as not to reveal too much personal information. We often assume that children will adopt the same conceptualisation, but should we?

Privacy is a fluid notion. Think of Victorian times and the imperative for women to keep their ankles hidden. Part of the reason its definition is shaped and reshaped is due to the changing social environment in which we live. This idea is useful for thinking about why children divulge so much information online.

Children are growing up in public (not private) times, in which people freely and constantly reveal themselves on their screens. This is not solely associated with physical nudity and the stream of semi-clad women that constantly inhabit advertisements, music videos and the like.

An environment that idolises nudity certainly contributes to children seeing such behaviour as the norm. Privacy, however, is not just about nudity and sex.

Also read: Kids were asked who their favourite teacher is, and why. Here’s what they said

Given the exponential growth of reality shows and social media, children now have unprecedented access to the inner thoughts and personal actions of others.

Children are growing up watching real people freely share their deep personal ideas, experiences, opinions and actions. The very purpose of these mediums is to encourage such sharing of information!

Similarly, they watch Survivor and The Bachelor where people can reveal the darker side of their ambitions, worldviews and ways of dealing with others. Their revelations are under the guise of competition however they offer subliminal messages about what we can and should share publicly share.

Consistently watching others reveal themselves on screen feeds children’s understanding of what is private information and what isn’t. Its impact is strengthened because children watch these revelations on their screen such as their tablet or mobile, which can make it more of an intimate, one to one connection for the child.

Add to this, the dynamic stage in life young people are at, which is characterised by risk-taking behaviour. This combination results in the understanding that sharing what many adults might consider being private ideas, is just part of life.

Also see: The Social Dilemma: Are our kids puppets to social media?

In previous generations, it was assumed that the average person wouldn’t want to give up privacy. But for this generation, giving up privacy for a social life, fame (or infamy for some), easy access to shopping and studying or working from home is the norm.

Children’s penchant for online sharing is a much larger cultural transformation than it’s given credit for. The whole idea of what is private and what is public is being disrupted and reshaped by new screen-driven interests and activities.

There is a need to move away from simply judging and reprimanding for their online sharing habits. There is always a need for safety and awareness campaigns, although it is also important to move beyond older and outmoded views of privacy so that we can understand young people’s privacy negotiations.

In this way, we might have more of a chance to meaningfully support negotiations that are transparent, equitable and foster children’s well-being.

For a weekly wrap of our latest parenting news and advice, sign up to our free Friday Parent24 newsletter

We live in a world where facts and fiction get blurred
In times of uncertainty you need journalism you can trust. For only R75 per month, you have access to a world of in-depth analyses, investigative journalism, top opinions and a range of features. Journalism strengthens democracy. Invest in the future today.
Subscribe to News24
Next on Parent24
Car seats are a must from birth up to age 9, but only 7% of SA's kids are secured 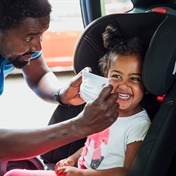