Why is my child so attached to this blankie, and should I be worried? 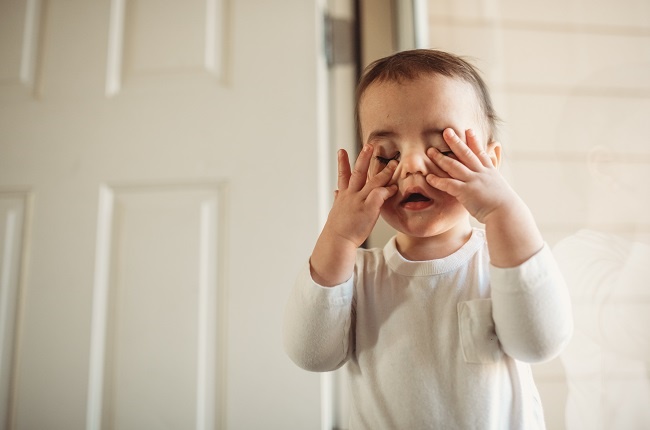 Child stands next to door covering the head with hands.

The nappy bag is fully stocked, you’ve got many healthy snacks on hand, and the car seat is sitting securely in the car.

For once you’re prepared for everything, but still, you’re running late, all because your little one refuses to set foot out of the house.

He wants his Blankie first, and Blankie seems to have disappeared – and there’s just no convincing him to go without it.

This is a scenario that many parents are familiar with, and wonder if they should worry about it.

Reassuringly, plenty of children develop an emotional attachment to an object, whether to a blanket, teddy bear, pillow, dummy or bottle, and this is nothing to be concerned about.

The object clutched in your child’s hands, which probably looks to you like a dirty old blanket that deserves to be retired, represents your child’s emotional development.

The inanimate, often soft and cuddly, objects that children get attached to are referred to by psychologists as “comfort objects” or “transitional objects”.

Although your child’s attachment to these objects may seem to convey dependency, the opposite is true. Between the ages of 6 months and a year, babies start to enjoy more freedom as they become more and more mobile.

Because of this newfound independence, they also start to experience separation anxiety and begin to crave comfort. At this age, babies are also starting to realise that they are separate beings from their parents.

A baby sees himself and his mother as a whole, but as he gets older, he starts to separate the “me” from the “not-me”, evolving from complete dependence to a state of relative independence.

To help ease their anxieties over this, children form an attachment to a transitional item.

Your child’s love affair with his transitional object may very well continue well into toddlerhood, with his attachment peaking between 18 months and three years of age.

His attachment to this object is not an unhealthy sign of insecurity, and very often represents the strong bond between parent and child. A child who seeks comfort from an object is often one whose need for love and attention has been consistently met by his parents.

Not only is your child’s attachment to these objects a sign of his healthy development, but it also serves a valuable purpose. Because of the comfort and warm feelings that are associated with your child’s transitional object, it becomes helpful in any situation where your child suffers anxiety or stress.

For example, your child might turn to his Blankie every time you leave him with a babysitter or other times that he is separated from you.

This is because it allows him to take a little piece of home with him wherever he may go, and so he experiences less apprehension.

Your child’s transitional object represents all components of “mothering”, which means that he can create what he needs through the object. This is what enables him to find comfort in the object when he is separated from you for long periods.

His object is also very important at bedtime and acts as a defense against anxiety or fear.

A transitional object also helps your child navigate his way through a new experience by role-playing a stressful situation. Visiting the doctor, for instance, might be a very scary prospect.

Acting out the visit on his teddy bear might help your child to ease his fears. The doctor could even listen to teddy’s heartbeat first.

Even though it is completely normal, your child’s attachment to his transitional object can be a bit trying at times. Although the object poses no risks, it does pose a few dilemmas, but you can find ways around them with these tips.

Choose safe toys Although it is impossible to predict which toy or blanket your child will latch onto, you can avoid any mishaps by choosing toys and blankets that are safe from the word go.

Make sure that his toys aren’t choking hazards and pick playthings that are free of ribbons, buttons and small plastic parts. Your child’s stuffed toys should be filled with cotton or acrylic batting, and not beads or beans.

Remember that your child is going to spend a lot of time dragging his object around and will probably put it in his mouth a lot. Surround your child with safe, non-toxic objects that he can develop an attachment to.

Accept the fact that it will probably get lost

The one drawback to your child’s attachment to a particular object is the ever-present risk that it will get lost.

Because your child probably insists that it accompanies him wherever he goes, his transitional object could easily become missing in action, and you’re left with the tearfully emotional consequences.

The good idea is to buy an identical spare of the object as soon as he’s formed an attachment to one. Remember to switch these two identical objects from time to time, so that if the day comes that you will have to replace a lost loved object, it will at least smell, feel and look the same.

Set limits You may want to establish a few boundaries to keep your child from taking his object with him wherever he goes. Explain to him that he can have his “Blankie” at bedtime, and on special occasions like when he sleeps over at gran’s house, but he can’t have it on a play date, or when you go to the shop together.

If your child becomes inconsolable at this suggestion, though, it’s best just to let it go as it’s important not to deprive him of the comfort that he needs.

If he insists on dragging his object to crèche, for instance, you could try getting a mini version of it or cut off a piece of his Blankie.

Although it may seem so at times, your child will not still be fervently clutching his teddy bear when you drop him off for his first day of high school.

Most children choose to give up their objects by themselves for a variety of reasons.

By the age of 4 or 5, he will be exposed to a whole new set of social situations and will be much better equipped to deal with change without having to seek comfort from an object.

Another factor that could play a role is the pressure from his peers.

If your child’s playmates aren’t still toting their comfort blankets around, he’ll probably follow suit. The establishment of his transitional object is your child’s first creative act, as he is using his imagination to create a reality out of nothing.

Please don’t push your child to give it up. By doing so, you could be forcing him to become even more attached to his object.

He will give it up when he’s ready to.

We live in a world where facts and fiction get blurred
In times of uncertainty you need journalism you can trust. For 14 free days, you can have access to a world of in-depth analyses, investigative journalism, top opinions and a range of features. Journalism strengthens democracy. Invest in the future today. Thereafter you will be billed R75 per month. You can cancel anytime and if you cancel within 14 days you won't be billed.
Subscribe to News24
Related Links
Should you test your child's DNA?
WATCH: 'We didn't know how much this was really affecting our kids until this happened'
How stress affects your children, and how to recognise the signs
Next on Parent24
'Worry and fear are constant': How to support your child with an anxiety disorder