15 South African children's books to bring calm during the holidays We love hearing your thoughts and comments on our stories. After reading our story on six children's stories to bring calm to the holiday chaos, director of literacy NGO Wordworks, Shelly O’Carroll, suggested 15 South African books for the holidays that your little one will enjoy.

These books are suitable for children aged 0 to 8 and have been translated into various South African languages. They have bright and fun illustrations and can be purchased in local book stores or as ebooks.

The lesson of this story is “Those who cannot read repeat their mistakes over and over again." When a R200 note lands on Mr Hare's doorstep, he is convinced he's been tasked with returning the note to Mr Mandela. After all, it must belong to the iconic leader as it has his face on it! Mr Hare journeys to the City of Readers to hand the note back to its rightful owner, but he encounters many obstacles along the way. This story delivers a very valuable lesson while also teaching your young one about our South African bank notes.

Written by Graham Isaacs and illustrated by Katrin Coetzer (LAPA)

It’s the day after Christmas and Graham and his family are going to Kalk Bay by train! Before they arrive, they must stop at many stations and see the sights along the way. This book is great if you’re Capetonian or planning a trip to Cape Town. Your little one will get to memorise all the stops with Graham and his family and then you take them on the train so they can see the stops in real life!

Also available in Afrikaans and isiXhosa.

A Wish This Big

Written by Ingrid Mennen and illustrated by Katrin Coetzer (Tafelberg)

During breakfast, Rashied suddenly sees an island in his blue bowl of cereal. Could it be Robben Island where his grandfather was imprisoned? He'll learn about how the football team his grandfather and the other prisoners played for helped them escape the confines of being on the island when they played the beautiful game.

Giraffe is in a bit of pickle, she’s woken up with a knot in her neck! She must find a way to untangle herself; all the other animals seem to have a suggestion about what to do but which one will help her?

The age-old saying "It take a village to raise a child" is proven in this beautiful tale. Jamela longs for sparkly princess shoes for her birthday but Mama insists she must pick sensible black school shoes instead.

When she gets home, Jamela decorates the school shoes with beads and glitter but that makes Mama very upset. Their neighbour, Lily, sees the shoes and is taken with them and invites Jamela to help her on a special project. They design more pretty and sparkly shoes and sell them at the local market. Jamela may just get her birthday wish of her sparkly princess shoes after all!

This beautifully illustrated book teaches children to be proud of their heritage and traditions. A young Nguni calf keeps comparing himself to other cows from all over the world. His mother listens as he waxes lyrical about all the foreign cows and how amazing they are. She then takes him outside where she tells him the story of the Nguni cows and how they became the most respected cattle in Africa. This book will inspire parents to instil a sense of pride in their young ones as well.

Also available in all 11 official languages.

A young Kenyan girl named Handa takes some fruit for her best friend, Akeyo, in a basket. However, unbeknown to her, a few animals steal the fruit from her basket on her way to Akeyo’s village. Will she realise that she has no fruit in her basket before she reaches her friend?

Lulama’s mom sews her a colourful blanket made from lots of scraps of material. Each colour and fabric has a special story that make the blanket magical. This book will help with expanding your young one's imagination and let them see things in a new creative light.

Available in English, isiZulu and isiXhosa.

Nandi, our protagonist, doesn’t speak very much. Instead, she opts to make up her own songs that have many sounds but no words. The grown-ups around her tell her to tone it down or to keep quiet, except for her Gogo who encourages her to keep singing and to listen to the different sounds of the animals. As she gets older, she continues to sing and even incorporates words in her songs. Eventually, she gets to sing in the church choir and everyone listens this time around because she has a beautiful voice.

The Song of Six Birds Lindiwe receives a flute as a gift from her mother. Unfortunately, Lindiwe cannot play the flute, so she journeys to find sounds for the flute. She collects six different tunes from six different birds and she gets to play her melodic songs for the village people so they can sing, dance and feast! The angry owl wants to go swimming on a hot summer’s day, but things don’t go according to his plans and that angers him even more. He encounters some humorous situations along the way (well, humorous for the reader) and he must learn a few lessons about taking some things with a pinch of salt before he may have a wonderful day of swimming.

The elephant who was scared Why is dog afraid of storms 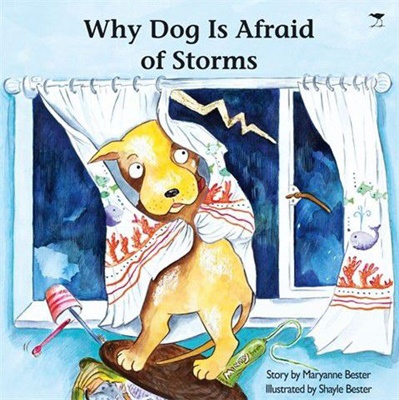 Have you ever wondered why dogs are so afraid of the thunder? Their bodies shake and shiver and their eyes become wild and wide as saucers? This exquisitely illustrated book explores this topic and adds the element of mischievous cattle who will try and trick the frightened dog into letting them out of their kraal. This board book is developed for children aged 0 to 2 in four South African languages. It’s a great way to begin developing your child’s literacy skills.

Available in Afrikaans, isiZulu and isiXhosa.

We also love these titles:

Dr Shelley O’Carroll is the director of Wordworks, a nonprofit language and literacy development organisation.

Do you have any more suggestions for us, let's start our children's book club. Email us at chatback@parent24.com and we may publish your comments.