'We had to fight for the crown': Seven-year-old Angela Roqo wins International Junior Miss SA 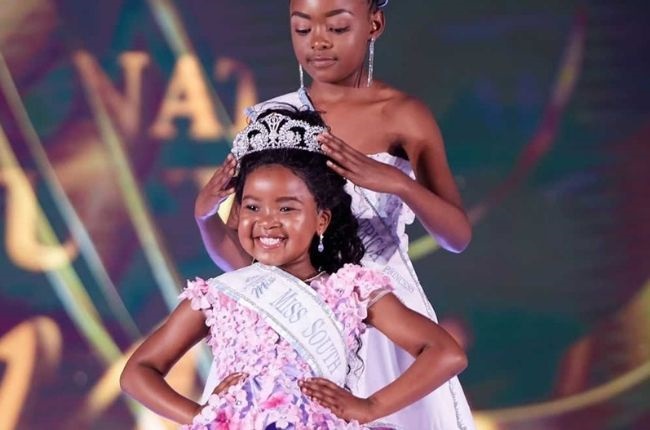 Her mom, Zikhona Roqo, shares Angela's journey with us, from her tot's first title to her latest accomplishment.

After winning the title of first princess in a local pageant in 2017, her mom says Angela has never looked back. In 2019 alone, she was crowned Miss Elite SA, Toddler and Tween of the World, Miss Global Beauty of SA, and in December that year, she lifted the trophy as Miss Little Princess of South Africa.

'We had to fight for the crown'

In February 2020, Angela entered the South African version of the pageant held under the umbrella of the International Junior Miss pageant. The pageant was founded in America, in 2008, by Nikki Clark to encourage positive achievement in young girls. The winners in each division walk away with a scholarship as well as a crown. With charisma, elegance and a little bit of sass, Angela was crowned the 2nd Princess in 2020, but of course, she did not give up at this hurdle.

"We had to fight for the crown," said Angela's mother, Zikhona Roqo, as she reflected on Angela's journey to claiming her new title.

The arrival of the hard lockdown became a challenge for the pageant princess, as events were cancelled or postponed.

Angela was set to represent South Africa in the Little Mr and Miss Africa pageant which was going to be held in January 2021 at the Pearl of Africa Hotel in Uganda, but it was postponed to December 2021 due to the Covid-19 pandemic.

However, Angela did not sit around and wait.

'The standard of the pageant was high'

"This was the toughest pageant for Angela. There were thirteen or fourteen contestants in her category. The standard of the pageant was high, and the judges were well-known pageant queens from big local pageants," shares her proud mom, Zikhona.

"She won the International Junior Miss SA and also walked away with a scholarship for being the top achiever academically in her category," Roqo told Parent24.

"Angela is now going to represent South Africa in the United States of America next year."

We asked Angela how she felt when she was crowned the winner in her category. She told Parent24, "I felt so proud of myself, so happy and excited. I could not believe when they announced my name because the competition was very tough."

This princess whose hobbies include creative arts, reading and modeling also told us that she wants to be a paediatrician when she grows up, and she plans to achieve this by being courageous and disciplined, and by having integrity.

We live in a world where facts and fiction get blurred
In times of uncertainty you need journalism you can trust. For only R75 per month, you have access to a world of in-depth analyses, investigative journalism, top opinions and a range of features. Journalism strengthens democracy. Invest in the future today.
Subscribe to News24
Next on Parent24
The climate crisis puts children at high risk, says UNICEF report