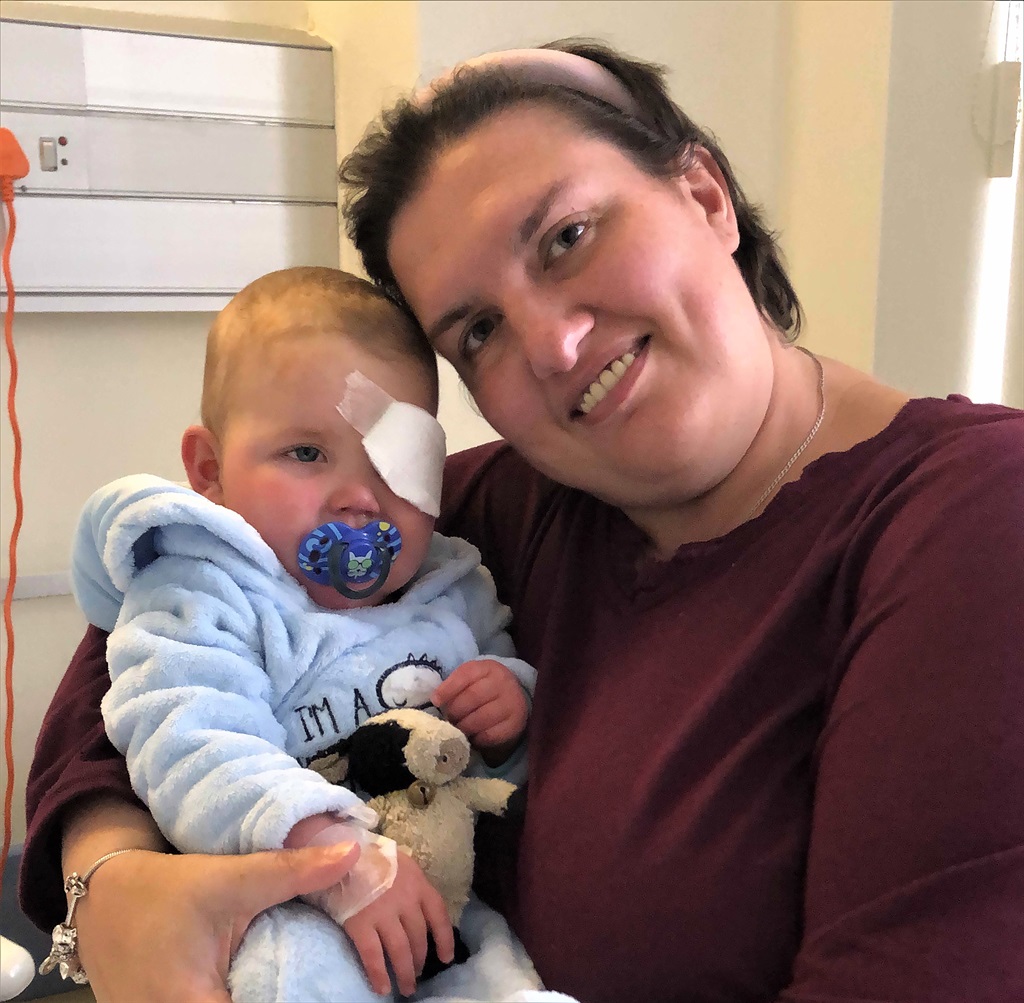 "The fact was, there was no other solution for AJ to get the care he so desperately needed – this was the only option"

Hearing that your baby boy needs to undergo sight-saving surgery at the age of just nine months is difficult news for any parent to receive.

Especially when the condition is so rare that options are limited to a highly specialised procedure that requires a particular team of medical experts, in another province.

This was the experience of Erica Croxford, whose son Anthony – known as AJ to his family – was diagnosed with a rare skin condition, juvenile xanthogranuloma, which resulted in a growth inside his left eye.

According to Dr. Hamzah Mustak, an ocular oncology and oculoplastics specialist practising at UCT Private Academic Hospital, the condition most often presents as a benign lump or bump on the skin and is not usually cause for concern.

However, more than one lesion on the skin can also be accompanied by a lesion in the eye, which can be serious. In AJ's case, it had resulted in a growth causing glaucoma, or severe pressure in the eye, that could lead to loss of sight or even loss of the eye itself.

"When AJ came to us in June this year, we immediately began to prepare for a highly specialised procedure using brachytherapy, most often used to treat certain types of cancer. This is a form of internal radiation therapy, whereby the radiation is temporarily implanted or placed at the affected area. While the growth in AJ's eye was not cancerous, it needed to be eradicated to prevent the eventual loss of his eye," explains Dr. Mustak.

While Dr. Mustak does use brachytherapy as a form of treatment on tumours in the eye, this is the first time it has been used in South Africa as a treatment for a patient with this particular condition.

The unique collaboration between UCT Private Academic Hospital and Groote Schuur Hospital affords the opportunity for this highly specialised care to be available at the facility.

Read: How to tell the difference between Covid-19 and stomach flu

This was neither the beginning nor would it be the end of AJ's long journey with this rare condition. Erica explains that she felt a strong mother's instinct about a small mark she noticed shortly after the birth of her son.

"From the time AJ was just two days old I was aware of this mark on his cheek and I had a feeling there was something not quite right about it. The doctors I spoke to couldn't tell me what it was but did not seem too concerned, so I tried to put it out of my mind," she says.

"Then in December 2020 I noticed another mark on AJ's armpit but little did we know that this was juvenile xanthogranuloma and that more than one skin lesion could indicate another in his eye. Shortly after that, around New Year, he woke up one morning with a terribly swollen, milky eye and no movement in the pupil. I rushed him to the doctor and that is when the journey really began. At the time he was just four months old," says Erica.

The weeks and months that followed would prove to be some of the most difficult that AJ and his family would have to endure. During this time AJ was referred to an ophthalmologist who, after taking a biopsy of the mark under AJ's arm, was able to diagnose his condition.

By this stage, the pressure in AJ's eye had increased dramatically and he had to undergo several treatments as well as four operations to try and treat the glaucoma and the tumour in his eye.

Despite all these efforts the membrane of AJ's eye had grown out of control, and he was referred to Dr. Mustak.

"After an initial appointment with AJ in early June, it was clear we needed to try brachytherapy, which reduces the chances of unaffected tissues getting some radiation," notes Dr. Mustak.

"We are the only unit in South Africa that offers customised brachytherapy for the eyes and it was necessary for us to custom-design the radiation implant for AJ, which was done in consultation with my colleague at the hospital, radiation oncologist Dr. Julie Wetter. The process begins with examining the eye, taking measurements and then designing a template. A dosage is then calculated for the delivery of focused radiation to the tumour.

"When it comes to brachytherapy in the eye, there is an additional layer of complexity to the process, as this is an organ that moves a lot. We, therefore, needed to use a particular design, like a big ring, to secure the implant so that when there is movement the implant remains anchored to the eye muscles.

"It took around 40 minutes to perform the procedure on AJ, after which the implant remained inside his eye socket for 17 hours to allow the radiation to be delivered to the tumour, before being removed again. The success rate for brachytherapy in the eye is over 90% so we are hopeful that the tumour will not grow back and that AJ will have vision in that eye again," says Dr. Mustak.

Finding a way to make it happen

Such a complex procedure requires considerable resources, and before the procedure took place it became apparent that affordability would be a challenge for the Croxfords because UCT Private Academic Hospital is not part of the contracted hospital network of their medical scheme. This would result in the cost of the procedure not being covered fully and would therefore be virtually impossible for the family to afford.

"The fact was, there was no other solution for AJ to get the care he so desperately needed – this was the only option. I brought this to the attention of the hospital management and, after some discussion, we found a way to ensure that AJ had a chance at having his eyesight saved," said Dr. Mustak.

According to Lizl Rodrigues, hospital manager at UCT Private Academic Hospital, the facility and its staff were honoured to have played a role in providing little AJ with the opportunity to have his sight restored.

"We are glad that we could help to make it more accessible for this little patient and his family. We wish AJ all the best on his road to recovery."

Just over three weeks have passed since AJ's brachytherapy and, having taken him for two pressure check-ups back home in KwaZulu-Natal, his mom is happy to report that his eye pressure has now stabilised at a healthy level.

"It's not yet the end of the road, as AJ will be scheduled for cataract surgery at some point in the near future.

"Only after that will we really know what his vision is going to be like in that little eye. However, the outlook is for now very positive, thanks to the work of the incredible Dr. Mustak, his colleagues and the amazing team at UCT Private Academic Hospital. You guys are truly special," concludes Erica.

We live in a world where facts and fiction get blurred
In times of uncertainty you need journalism you can trust. For only R75 per month, you have access to a world of in-depth analyses, investigative journalism, top opinions and a range of features. Journalism strengthens democracy. Invest in the future today.
Subscribe to News24
Next on Parent24
WATCH | 'I wasn't expected to live': UK mom with terminal breast cancer defies the odds