We'd all like to make sure everybody in the family eats at least one healthy meal a day.

Mix the onion, carrots, lamb, apricots, olives, garlic, flour and spices together in your slow cooker and add half a cup of water. Cover and cook the lamb and vegetables on low for seven to eight hours. Serve with mashed potatoes, rice or couscous. Combine the onion, carrot, garlic, tomato paste, thyme, oregano, salt and pepper in your slow cooker. Add the chopped tomatoes and the meat, turning it to coat. Cover and cook on low for seven to eight hours. Twenty minutes before serving, cook the pasta according to the package directions, drain and return to the pot. Some children prefer small shaped pasta rather than spaghetti. Meanwhile, using two forks, shred the meat and mix it into the cooking liquid. Toss the pasta with the meat sauce and grate some Parmesan over before serving.

In Italy, Bolognaise sauce is not made with mince. It's made like this and the meat sauce is called ragu. Because the meat is cooked for such a long time and becomes so tender, it's an ideal way to introduce baby to meat dishes. Just fork mash with the pasta and some of the sauce (make sure you include at least one piece of carrot). Safe to serve from nine months. If you’re using fresh spinach, wilt it in batches in a big pan with a little olive oil. Mix together the spinach, ricotta and half a cup of the Parmesan in a medium bowl. Put a layer of Italian tomatoes in the bottom of your slow cooker inner dish. Top with two to three noodle sheets (you can break them to fit into your pot), another layer of tomatoes, half the spinach mixture and ½ a cup of the mozzarella. Repeat the layers, ending with a layer of mozzarella and Parmesan cheese. Cover and cook on low for three to four hours. Serve with bread and a green salad. Place the apples, sugar and cinnamon in the bottom of your slow cooker. Dot with butter, pour the oats over the top and then add the water. Do not stir. Cook overnight on low (about eight hours). Serve with cinnamon sugar, apple purée and milk or some vanilla yoghurt as soon as you wake up. No more rushing around in the morning to get breakfast ready!

You can also make apple purée for your baby in the slow cooker. All you do is peel and core some apples, add a little water (about half a cup for six apples) and set on low for six to eight hours. Fork mash or use a stick blender for a smoother consistency. 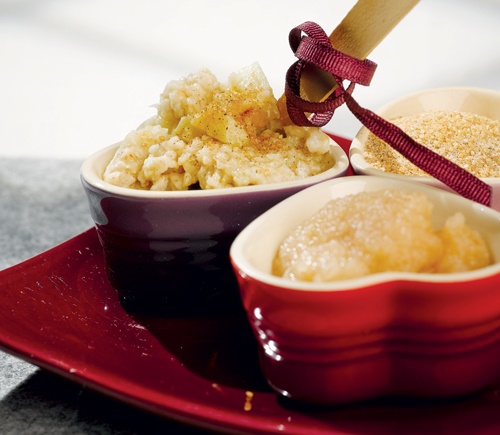 We live in a world where facts and fiction get blurred
In times of uncertainty you need journalism you can trust. For only R75 per month, you have access to a world of in-depth analyses, investigative journalism, top opinions and a range of features. Journalism strengthens democracy. Invest in the future today.
Subscribe to News24
Related Links
5 healthy habits to teach your kids right now
Vegetable Stir Fried Rice
Ostrich & prune stew
Next on Parent24
Should junk food ads targeting kids be banned?