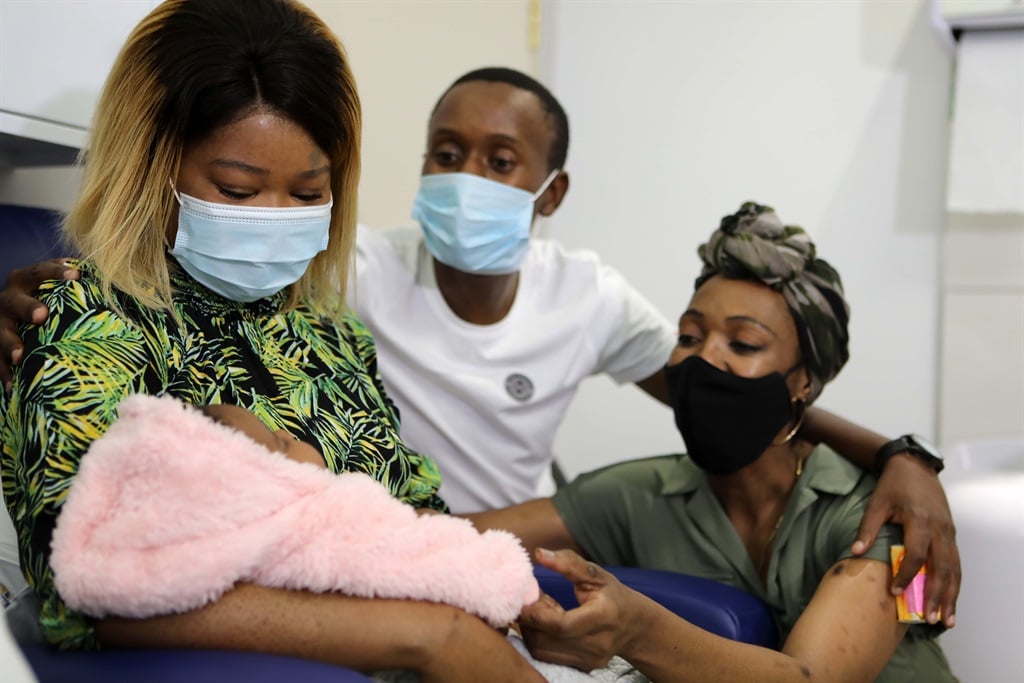 An air of celebration surrounded 27-year-old Mbali Mbatha, as she was wheeled out of Netcare Milpark Hospital amidst applause from doctors, nurses and hospital staff who had come to wish her well when she recently left the facility to start what would be a very different life than what she led before.

Not only did the young mother from Winchester Hills in Johannesburg leave hospital with a three-month-old baby daughter – whom she met for the first time just a few weeks before – but she also left with a newly transplanted lung, having overcome one of deadliest viruses of the 21st century.

Mbali’s Covid-19 journey started more than 113 days prior on 23 November 2020, when the severely ill expectant mother was hospitalised in an effort to safeguard both her and her unborn child.

Mbali’s condition however deteriorated and by 1 December her obstetrician was left with no choice but to deliver her baby at 30 weeks via emergency C-section.

Mbali credits this as one of the first in a series of major medical decisions that would have life-saving consequences not only for baby Kuhle, which means 'all is well', but also for her.

"I was shocked when the doctor told me that he needed to prepare for a C-section and operate immediately. When I realised that I would not be able to carry full term I was devastated. I phoned my husband, Sizwe who calmed me down and said I must let them take the baby out as it would be best for us. All I remember is the cold, it was terribly cold in the operating theatre. I felt so alone – my husband could not be with me. It was a very distressing experience, as I did not even see the baby... I gave birth to my little girl and I passed out," recalls a tearful Mbali.

Dr Paul Williams, pulmonologist intensivist at Netcare Milpark Hospital relates the next steps: "Mbali was brought to Netcare Milpark Hospital, shortly after she had her baby. She was in serious danger as both her lungs were affected from top to bottom with pneumonia and she was not extracting oxygen from the air. We immediately had to escalate her treatment to a more sophisticated form of care than what would generally be needed by most patients with Covid-pneumonia."

Cardiothoracic surgeon, Dr Martin Sussman, says Mbali was in extremis and was taken straight from the ambulance into theatre where she was placed on extracorporeal membrane oxygenation (ECMO), which artificially maintains a supply of oxygen to the brain and other vital organs for patients who require either or both respiratory and cardiac support.

"ECMO is essentially an artificial lung. The circuit does the work of the lungs and that is how we kept Mbali alive while she had Covid-pneumonia," explains Dr Sussman. "While Mbali eventually recovered from Covid-19 her lungs did not recover. One of the complications of Covid-19 is that it sometimes damages the lungs extensively. In Mbali’s case the damage was irreversible. Her only chance of survival was to receive a donor lung." Waking up in hospital after two months

According to Mbali her next memory after delivering her baby was waking up in Netcare Milpark Hospital, many weeks later.

"Some time after I woke up, I was told that I had been in a coma for two months and that I had a lung transplant. In fact, it seemed that there was very little hope I would survive. Had it not been for the exceptional medical care I received and for the lung transplant I would not be here today," she says.

Despite everything she has gone through, Mbali has left Netcare Milpark Hospital with good memories and much to be thankful for: "The staff are very warm and caring. They ended up feeling like family. The encouragement that the nursing staff and doctors gave me on a daily basis really carried me through. They made me feel like everything was going to be ok."

"I am so thankful to be here today and that I have been given an opportunity to raise my daughter. I am grateful to the doctors and staff of Netcare Park Lane Hospital and Netcare Milpark Hospital. I am particularly grateful to the donor and the brave family for the gift of life, which ensured that I was given this second chance."

"My husband Sizwe has given me so much moral support and encouragement. He only ever had positive things to say. He was a constant source of inspiration throughout my recovery, and he kept telling me that I would walk out of the hospital. During the time that I have been in hospital my mother, Christine has been looking after my baby. While I am sad that I missed out on so much time with her, I am eternally thankful that my mother was there to care for her. More than anything I thank God for saving my life and giving me a second chance at life," says Mbali.

A first for South Africa and the African continent?

Commenting on what appears to be a first for South African medicine, Dr Williams, who along with Dr Martin Sussman, led the lung transplant team performing Mbali’s surgery, says lung transplantation itself is a rare procedure for patients with established lung disease such as cystic fibrosis and other conditions. It is done only after all other treatments for lung failure are unsuccessful.

"Covid-19 is a new one for us though. We have had no experience in transplantation with this virus and we are fairly sure that we are the first team in South Africa to do it – perhaps we are even the first team on the African continent. Throughout the world there have been only around 100 lung transplants performed so far for COVID-19 pneumonia at a handful of facilities."

"To be able to do a transplant on this young woman who is also a mother, was really something special. We did it for her and her baby. Being part of this remarkable team that can make this kind of difference is an immense honour," notes Dr Williams.

Submitted to Parent24 by Netcare