WATCH: This giggling baby’s chuckles were caused by a rare brain tumour 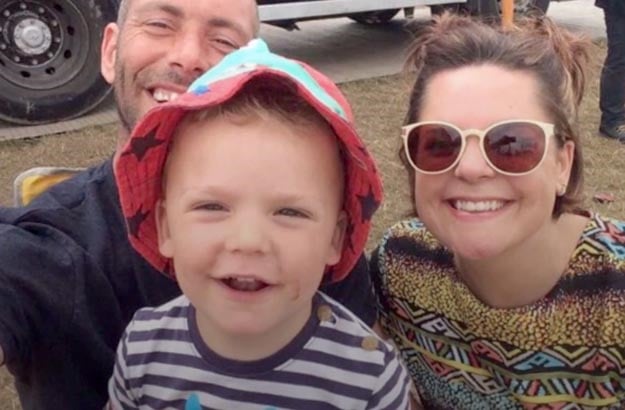 Jack Young with his parents Ed and Gemma.

There’s nothing quite as delightful, and infectious really, as a baby’s laugh. And it’s all the more wonderful when it’s your little one giggling at every face you make. So when Gemma and Ed Young heard their little one chuckle, they thought he was just really very happy – they never would’ve guessed it might have to do with a rare brain tumour.

“We were exhausted… there was no break from it, the chuckle sound was constant, and for a long time we had no clue why,” explained Gemma, mom to Jack who started giggling just two weeks after birth, and for up to 17 hours a day. But doctors later found Jack’s outbursts were triggered by a hypothalamic hamartoma – a benign brain tumour causing gelastic epileptic seizures, also dubbed “laughing seizures”.

The rare gelastic seizures normally occur in only one in every 1000 children with the brain condition epilepsy and involve sudden bursts of energy, usually in the form of laughter or tears. But doctors struggle to identify the seizures, simply because differentiating between a real and fake laugh or cry, particularly in children, isn’t easy to do.

However, signs of a gelastic seizure may include:

Gelastic seizures have been associated with several conditions including temporal and frontal lobe lesions and tuberous sclerosis, but hypothalamic hamartoma seems to be the main cause, with the surgical removal of the growth the only intervention.

So after two years, Jack had a 10-hour operation to remove the brain tumour, and the seizures stopped. And since the operation, Jack, now aged 4, has not had a single laughing seizure.

All his giggles and laughter are as a result of one thing and one thing only – happiness.

Does your child have a rare condition? Tell us your family's story by emailing chatback@parent24.com and we may publish it on the site.

We live in a world where facts and fiction get blurred
In times of uncertainty you need journalism you can trust. For only R75 per month, you have access to a world of in-depth analyses, investigative journalism, top opinions and a range of features. Journalism strengthens democracy. Invest in the future today.
Subscribe to News24
Related Links
WATCH: The story of Ayaan Ahmed, Cape Town's very own 'Bubble Boy'
Meet 7-year-old Peet Pretorius: the boy who stole our hearts
WATCH: Boy with rare condition starts first day of primary school
Next on Parent24
Are our screens to blame for increasing prevalence of nearsightedness? A local expert advises