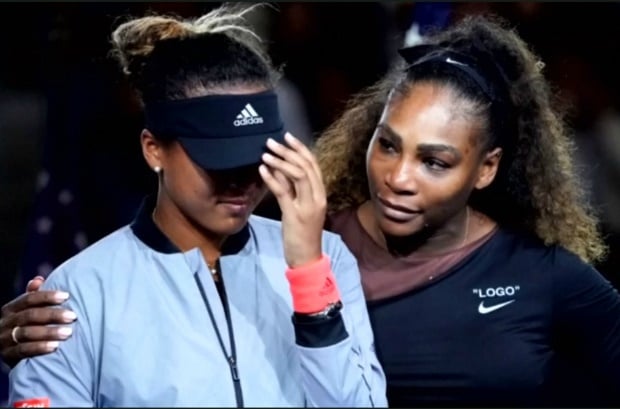 Too close for comfort? Serena williams and Naomi Osaka, US Open 2018.
Reuters/watch video below

There's nothing a parent wouldn't do to set their children up for success. We want only the best for them and if we could protect them from every bad thing, we would. But the question is, would we be hurting them by not letting them feel disappointment, sadness and pain? What would they learn if all they did was win?

Do you really want your child to be like DJ Khalid?

The 118th US Open women's final just captured one of the most heartbreaking sporting scenes of 2018.

The bitter match saw Serena Williams break her racket, scold an umpire and derail what could have been a shining moment for her 20-year-old opponent in the lead, Naomi Osaka.

The loss has sparked a flurry of debate, with Serena pointing to years of unfair treatment, sexism and racism as the reason for her outburst, and the jury is still out as to whether past injustices can vindicate the champ's recent actions.

But whether your child is a fan or just familiar with the role model, the incident could be the perfect opportunity to talk about winning and losing.

1. Losing is inevitable and it's okay

Serena is not referred to as the G.O.A.T (greatest of all time) for nothing!

Of the 31 Grand Slam finals she's played since 1999, she's lost only 8 times and she's the only player in a 20-year period to hold 10 Grand Slam singles titles.

As one of only a handful of tennis players to achieve at such an outstanding level – success she has achieved despite major adversity and lousy odds – Serena has always been a winner.

And the fact that even such a celebrated and determined achiever can lose is proof that 100% perfection is not possible.

Lesson: Losing is a side-effect of participating, and just another part of being human.

“It is impossible to live without failing at something, unless you live so cautiously that you might as well not have lived at all – in which case, you fail by default.” – J.K. Rowling

Has shielding your child away from certain things ever backfired? Share your story by emailing to chatback@parent24.com and we could publish your letter. Do let us know if you'd like to stay anonymous.

2. Shouting isn't a good look, no matter how justified your cause

The incident has sparked much debate in the tennis community as to whether Serena was justified in her rant, especially around double standards for male and female players, or whether she was adopting a victim mentality.

The 2009 incident involving Roger Federer is a case in point, in which the male player can be heard back-chatting to the umpire.

Roger did not receive a game penalty for the blatant disrespect.

When compared with Serena's remark, "You stole a point from me, and you are a thief," for which the female player was penalised with a game penalty, seems pretty outrageous.

The biggest difference between the two was their delivery: while Roger's comments were much more unsportsmanlike and more deserving of a serious penalty, Serena shouted her words, creating a heated argument compared to Roger's rather low-key insults.

Lesson: When debating your point, always remain calm. If you feel you won't be able to, remove yourself from the situation, returning once you've regained composure.

“Yelling doesn't get your point across, it only makes it louder.” – Grant Hill

Just like any other sport, the rules of tennis are well known by those who play the game.

This is the feedback from most tennis experts and even former male players, who themselves were surprised by the umpire's decision to apply a game penalty, without a final warning, also known in tennis as a "soft warning".

I will admit I have said worse and not gotten penalized. And I’ve also been given a “soft warning” by the ump where they tell you knock it off or I will have to give you a violation. He should have at least given her that courtesy. Sad to mar a well played final that way. https://t.co/xhBzFZX8Wq

Lesson: Learn and understand the rules, and always be fair if you're the one who needs to apply them.

4. Always find the right platform to have your say

Serena may have had a point about double standards, but chose a really bad place to voice her opinion.

Clearly under pressure and dead set on clinching her 24th title, the champion may have been overwhelmed by her own standards of perfection, but it's unfortunate that her reaction was to hash it out with the guy who determines which way the match will go (granted, Naomi Osaka's victory was already in sight).

With her influence and masses of fans, the star could have taken the loss on the chin (yes, that's easier said than done), and raised her very valid opinion elsewhere.

Lesson: Time and place is everything, be smart about when and where to share your opinion. There are certain spaces where, no matter how right you are, or how legitimate your cause, your words will fall on deaf ears.

One of the worst things about the incident was how much it took away from the match's winner. The young Naomi Osaka literally made history for herself and her country, being the first Japanese player ever to take home a Grand Slam championship.

Serena may not have intended to taint Naomi's victory but that's what happened, and she had to ask the crowd not to boo a sobbing Naomi at the presentation ceremony.

Lesson: Don't allow a personal loss to darken the happiness of others. We all have our time to shine.

“No matter how difficult things get, never stop holding strong to your dreams; your time to shine is definitely coming”  – Edmond Mbiaka

6. Know when to take a break

Serena's pregnancy, subsequent life-threatening labour and postnatal depression have been well-documented, giving her every right to take time out for herself to heal and get back in the game.

But being the superwoman she is, she returned to the tennis court just 3 months after giving birth.

Her passion, talent and determination cannot be dismissed but she really should've given herself more time to return to her absolute best without the pressure of having to win.

Lesson: Taking a break after an emotional or physical ordeal is not only okay, it's a must. Rest up, recharging is not just for smartphones.

“Everybody needs some time to rejuvenate, refresh, recharge and begin again.” – Revathi Sankaran

We love her to the moon and back, we really do.

She's one hell of an inspiration and her place in history has already been booked no matter what.

But knowing when you've gone too far is a must. Whether Serena was wrong on all counts remains to be seen but operating with an unstraightened crown isn't on.

Lesson: No matter what provoked them, your actions are your actions. If you've gone against the rules, you will be held accountable.

"You must take personal responsibility. You cannot change the circumstances, the seasons, or the wind, but you can change yourself. That is something you have charge of" – Jim Rohn

Has shielding your child away from certain things ever backfired? Share your story by emailing to chatback@parent24.com and we could publish your letter. Do let us know if you'd like to stay anonymous.

We live in a world where facts and fiction get blurred
In times of uncertainty you need journalism you can trust. For only R75 per month, you have access to a world of in-depth analyses, investigative journalism, top opinions and a range of features. Journalism strengthens democracy. Invest in the future today.
Subscribe to News24
Related Links
The real reason Serena Williams stopped breastfeeding
‘I felt like I was not a good mom’ – Serena Williams on postpartum
Serena Williams says she has never spent a day away from her daughter
Next on Parent24
'It's ok to like boys': When and how to talk to your child about sexual identity and gender roles