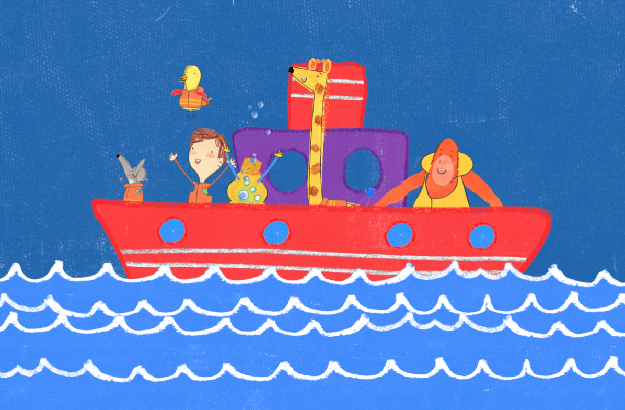 Pablo may have autism, but that doesn't stop him from tackling the world. (Showmax)

Admit it - there are certain shows that your kids have watched so many times that you’d rather chew your own wrists than have to hear that damn jingle ever again.

Enough is enough! Here are some hidden-gem shows that are aimed at pre-primary and primary school-aged kids but are guaranteed to not make you want to throw their device or your TV out the window. They’re all streaming on internet TV, ready to brighten the tedium of the upcoming school holidays.

Kiri is a feisty little dinosaur whose best friend is the gentle and thoughtful Lou (voiced by Jemaine Clement). Together they navigate different feelings and teach their young viewers about kindness, empathy and getting along. The clay creatures in this stop-motion animation are beautifully simple, and make you want to reach out and touch them.

Pablo may have autism, but that doesn't stop him from tackling the world. With the help of his imaginary friends, created with his crayons, Pablo learns that he can handle whatever comes at him. If you’re parenting a child on the spectrum, you’ll love the tender and clear-eyed way Pablo is portrayed in this series, which features an all-autistic cast.

Parents love the bright, aesthetically pleasing look of this show, and kids love the adventures that Betty the octopus, Happy the adopted crocodile (his parents are elephants), Roly the hyperactive hippo, Tag the rhino and Norrie the mouse get to go on with Duggee, their scout-leader dog who can only say “A-Woof”. Hey Duggee has raked in the awards, and it’s not hard to see why - this is one special series.

Lena is a teenage ballerina, training in Paris at the best ballet academy in the world. But she’s got a secret - she's actually a time traveller from 1905. While she tries to get back to her own time, she also has to fit in with the rigours and social pressure of ballet school. And then there’s a budding romance… Season 2 of this hit series is due to arrive on Showmax soon, so now’s the time for you and your aspiring ballerinas to catch up on Season 1.

Once your kids have outgrown Peppa Pig (which is also on Showmax), join them as they discover the magical world of the Little Kingdom. This series, about a fairy princess and her best elf friend, has a deliciously facetious edge that parents will get a real kick out of - the cantankerous Wise Old Elf and the completely inept but haughty Nanny Plum are particularly good for a chuckle.

Created by real-life brothers Chris and Martin Kratt, each episode of this cheerful, fun animated adventure features an animal that finds itself under threat, usually from villains who wish to poach it, or is struggling because of human interference in their natural environment. Both you and your nature-loving kids will learn something new about our planet’s endangered species.

Friendship, teamwork and confectionery are what this sweet show is all about. It may sound like it’ll give you a toothache, but there’s something very pleasing about this series about a young fairy who sets up a neighbourhood cafe with her sister and friends. Your kids will probably like the wands and “fairy beans” and other magical touches, but it’s the show’s farm-to-table philosophy, entrepreneurial spirit and focus on creative baking techniques and healthy eating that you’ll want them to absorb.

Inspired by the music of The Beatles, this series features a different classic song in each episode and is the best way to turn your kids into Beatles fans. The bugs in the show live in an overgrown backyard and face various challenges that they need courage, friendship and empathy to overcome - but what makes it really special is the soundtrack, which sees contemporary artists, from Sia to Aloe Blacc, covering the timeless tunes of George, John, Ringo and Paul.

The beauty of this show is that there are loads of episodes, movies and specials on Netflix, so once your kids are fans, it’ll take them ages to run out of material. The Super Monster kids attend Pitchfork Pines Preschool, where they learn to harness their powers and also get on with one other.

We all know that Chris O’Dowd can do no wrong, and so it’s no surprise that an animation with a kind of “pastel soft grunge aesthetic”, about puffins, narrated by him, is popular with both kids and their parents. This show is so soothing, it’ll put you and your little one to sleep, lulled by that Irish accent and the sweet storylines.

This is the reality cooking show that is kinder and funnier than other seriously competitive shows (though the food waste aspect will probably need to be addressed with your kids). Home bakers are tasked with recreating ridiculously elaborate cakes… with ridiculously terrible results. Host Nicole Byer is a particular treat.

What are your family's favourite TV shows to binge together?

We live in a world where facts and fiction get blurred
In times of uncertainty you need journalism you can trust. For 14 free days, you can have access to a world of in-depth analyses, investigative journalism, top opinions and a range of features. Journalism strengthens democracy. Invest in the future today. Thereafter you will be billed R75 per month. You can cancel anytime and if you cancel within 14 days you won't be billed.
Subscribe to News24
Related Links
16 Fun and affordable hobbies to try with your kids this year
Cold and rainy day indoor activities for the kids
Your 2019 July school holiday survival pack
Next on Parent24
Prince Albert's four children appear together in rare photo