My Dad, The Hero: fab dads in books, songs, movies and social posts 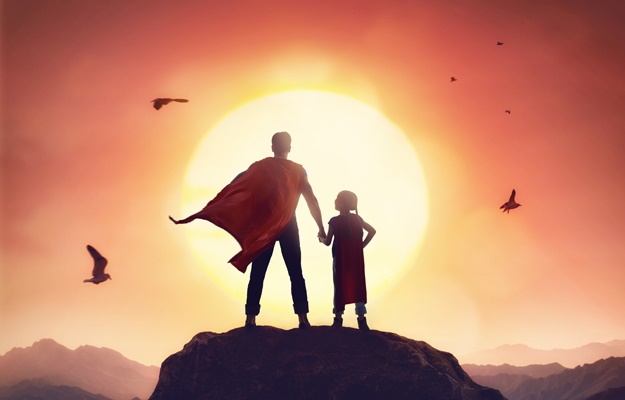 I cannot think of two more different people to be father and daughter and yet, my dad and I have managed to find a way to co-exist. That's not to say our relationship hasn't had its ups and downs. In fact, on really bad days, I think we've had more downs than ups. Yet, through all the arguments and disagreements, I can't picture anyone else yelling at me.

I remember being 5 years and waiting on my grandmother's stoep, my face glistening with Vaseline, wearing neon orange mesh flats and navy blue corduroy pants, eagerly waiting for my monthly Saturday adventure with my dad. It was always something new; a new restaurant, bookshop, garden, house viewing in fancy suburbs... whatever we chose to do, one thing remained, we were having fun together. I'll never forget how happy I was to be spending the day with him and how warm and fuzzy I felt for the rest of the day.

My parents had me when they were very young, and as I've been growing older, as I've been passing the ages they were when I was 5, 10, 16, I have developed a greater appreciation for them. Maybe those Saturday adventures weren't so easy to do for my dad, but he made sure to do them anyway because he knew how important they were to me... to us.

I love the advice he always has at the ready (even when he's mid-argument), the seriously dry jokes he tells over the phone when he's got flu and all his wild and wacky stories about his childhood and travels.

I look at him now with my younger sister and I hope they have a great relationship too. I hope she gets her Saturday adventures, I hope she gets to ride top-down with him listening to hip-hop without any destination in mind, I hope they argue in the teen section of Exclusive Books about how she's not reading enough African literature, and I hope they take in every moment and treasure it.

This Father's Day, I hope everyone looks back at the times they've shared with their father figures and learn to treasure the good and the bad. They've made your relationship special. Here's to more sweet memories with our dads. They truly are one of a kind.

Also read: How to celebrate dad this Father's Day

Pop-culture tends to be a reflection of our human nature, so it's not surprising that along the years, musicians, writers and actors have delivered heart-wrenching songs, books and performances about the men that truly matter.

From Queen to Sade, famous artists have belted out their love for father figures. These songs range from asking for their father's approval to singing praises about them, one thing is for sure: dads sure do pass on a lot of advice and knowledge. A retired clock-mender is on his deathbed. As he edges closer to death, slipping in and out of consciousness, he flashes back to the days spent with his father and grandfather. This story explores the impact that our fathers make on our lives by taking a closer look at fatherhood and masculinity through the eyes of three generations of men.

To Kill a Mockingbird - Harper Lee A book that needs no introduction, Harper Lee's bestselling Pulitzer Prize award-winning novel tells the story of a family, the Finches, and the lessons of sympathy, humility, tolerance and acceptance that Atticus Finch teaches his children. As Jack and his wife prepare for the arrival of their first child, Jack begins to panic. This fear has been brought on by his upbringing - his alcoholic father passed away before he could say goodbye. This loss has tormented him for years but as fatherhood looms, Jack cannot run from his past any longer.

About a Boy - Nick Hornby Not all dads are biological. When 12-year-old Marcus meets cool and hip 39-year-old Will, he just won't let go. He needs some male guidance as he approaches his teen years and Will needs some direction and to do some growing up. Set in a post-apocalyptic world, the book follows a man and his son as they make their way along the road. The man's primary concern is his son. He is all he has left. He views him as a gift from God and his main purpose is to protect him from evil. As they journey along the road, you see the lengths a father would go to protect his family.

Also read: Here's how you celebrated dad this past Father's Day

Congrats on 100,000,000 @Spotify streams, Jaden! @c.syresmith It is a Delicious Gift to a Parent to Admire his children. Keep Doin’ You!

When Will Smith recreated his son's music video to congratulate him on 100, 000 streams on Spotify. Now that's a proud and dedicated dad!

The biggest surprise of the day.... Welcome home @brooklynbeckham X happy birthday @davidbeckham I love u so much x kisses

Now that the oldest of the Beckham children has gone off to study in New York City, his family hardly get to spend time with him. This didn't stop him from surprising his football icon dad for his birthday.

John's been singing this song to Luna since her very first diaper change in the hospital and he hasn't missed one opportunity since. I present to you, the underground hit of our household - the stinky booty song! #StinkyBootyDuty #ProudCreativeConsultant pic.twitter.com/tFjtmWgl2P

Somebody's got a stinky booty! John Legend composed a song for nappy-changing duty and it's become a hit in his household. We're sure the song will also be appreciated by Luna's younger brother, Miles.

Singing to my Son every Morning is a Dream come through..... #DaddyDuties

Comedian Skumba Hlope's son definitely will not have a dull moment growing up. The father took to Instagram to share his own rendition of the popular song Pakisha by Dladla Mshunqisi. Who said lullabies are the only way to calm a baby?

Also read: WATCH: Skhumba sings to his son – and we love it

Even rapper dads have a lot to learn, just ask Kwesta. Popcorn is now called poppy!

A father goes on an adventure through the deep blue sea in search for his son, Nemo, who has gone missing. A classic animated feature for the whole family.

A father and factory worker, John Q. Archibald, faces a financial setback when his working hours are reduced at the factory he works at, resulting in his income decreasing. More hardship strikes him and his family when his son, Michael, is revealed to have a heart disease after he suddenly falls ill during a baseball match. Not being able to afford the healthcare his son needs, John holds the hospital where his son is being attended to, hostage. This film is about how far a father will go make sure that his son lives.

A divorced father will go to extreme lengths to be able to spend time with his children after he loses his job as a cartoon voice-over artist. Robbin Williams in drag, playing an elderly nanny, will sure get the entire family in stitches. This is a wholesome movie about a father's love for his children.

An unemployed father, Antonio Ricci, finally finds a job hanging posters around the city of post-war Rome. Unfortunately, his bicycle that he uses to get around the city gets stolen one day as he's putting up a poster. What unfolds next is a heartbreaking depiction of a father and son's quest to retrieve the stolen bicycle so he can once again return to work and be able to provide for his family.

When 14-year-old Amy moves to Canada from New Zealand to live with her dad, they just can't seem to get along. He has no clue how to be a father, and she's homesick. A small wilderness near the farm where she and her dad reside is destroyed by a construction crew and Amy discovers some unhatched eggs. She becomes determined to protect the birds until they hatch and help them migrate south when the winter comes. Her father is inspired by Amy's determination and passion for the young birds and helps her devise a plan to make sure the birds reach their destination.

This isn't just another zombie movie. Train to Busan is about a father and his daughter on a train to the Korean city of Busan. While they're on their journey, the country is hit with a zombie apocalypse. This father must literally fight to make sure that they get to their destination safely and unharmed.

Sam is a man with special needs, raising a 6-year-old daughter who's intellectual capacity is slowly surpassing his. When authorities find out about the father-daughter duo, they step in and take Lucy away from her father. Determined to win his daughter back he hires a lawyer to help convince the authorities that he is a suitable father for his daughter.

Chris Gardner invests his entire life savings in portable bone-density scanners, and the sales help his family get by but they are still heavily burdened by their financial situation. His wife cannot handle the lack of finances and decides to walk out on him and their 5-year-old son. While on his way from demonstrating a bone-density scanner, Chris meets a stockbroker and is inspired to apply for an internship at the company he works for. Against the odds, Chris works hard to make sure that he secures this internship so he can better his life and his sons.

Johnny Marco is a famous actor stuck in a rut. His life seems to be passing by but he has no lust for life any longer. When his ex-wife leaves him with their 11-year-old daughter, Cleo, indefinitely, he is forced to try and get out of his mundane and depressing life and be a present father.

How will you be celebrating your dad this Sunday? Share your stories and comments by emailing chatback@parent24.com and we may publish your comments.

We live in a world where facts and fiction get blurred
In times of uncertainty you need journalism you can trust. For only R75 per month, you have access to a world of in-depth analyses, investigative journalism, top opinions and a range of features. Journalism strengthens democracy. Invest in the future today.
Subscribe to News24
Next on Parent24
WATCH | Brave 3-year-old girl tests out skydive simulator for her birthday