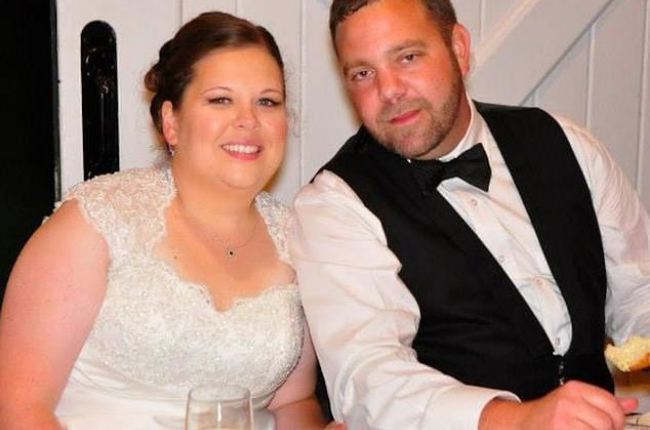 Julie and Travis who married in 2012 (pictured), struggled with fertility issues when they began trying for a family. Photo: Caters News/Supplied.

US based couple Julie and Travis hit it off immediately, when they met through work in 2007. By 2012 they were married and had started trying for a baby.

But in 2016 the couple suffered a miscarriage at just 12 weeks, and not long after Travis was diagnosed with terminal brain cancer.

Julie says that they were told that only 5% of patients survive beyond five years, and a majority of patients with the same diagnosis die within two years.

She admits they knew from the start that he would probably not be around for all of the things they had planned to do together.

They quickly decided to try IVF, in an attempt to have a baby before he passed away.

They banked his sperm before he began any of his cancer treatments to ensure that it wouldn't be affected by the treatments and had Julie's embryos frozen.

Now eight months old, baby Logan was conceived after Travis's death, using frozen embryos. Julie fell pregnant with twins, thanks to a double embryo transfer, but sadly lost one of the babies by 12 weeks.

"It was such a painful reality, knowing there was another baby there, but I continued to hope for the best with the remaining baby," she said.

"I was cautiously optimistic throughout my pregnancy. I was very excited and extremely hopeful." Logan (pictured) was conceived months after her father passed on. Photo: Caters News.

'I see him in her every single day'

Julie told the Mail Online that little Logan is a reminder of Travis.

"We had always wanted children. I'm so sad he missed out on all of this, but I see him in Logan every single day. I see him in her little smiles and expressions. It melts my heart that she looks so much like her dad."

"After the pain and devastation that came with losing Travis, it is indescribable that 15 months later I have a little piece of him back in my arms again."

Julie hopes and prays that Logan develops some of her dad's amazing personality traits.

"I pray that as she gets older, her personality develops to include all of the best parts of him, too."

In honour of her husband's memory, Julie has set up an organisation in her husband's name to support other families who are impacted by a brain cancer diagnosis, and is making an impact around the world.

We live in a world where facts and fiction get blurred
In times of uncertainty you need journalism you can trust. For only R75 per month, you have access to a world of in-depth analyses, investigative journalism, top opinions and a range of features. Journalism strengthens democracy. Invest in the future today.
Subscribe to News24
Next on Parent24
WATCH | Woman mysteriously conceives a son with death row husband