How much should new mothers work? It turns out the example set within families and friendship groups has a major role in deciding the hours women will consider after returning from maternity leave.

We are all used to the idea that, almost subconsciously, family and friends establish precedents in our lives.

We find ourselves repeating the admonishments of our parents to our own children; we fall into step with the fashions of our social groups.

It is now clearer how dramatic this effect can be on those mothers planning for a post-baby job.

The findings from our new research mean that any measures designed by government to make it easier to go back to work would have an effect not just on the woman targeted by the policy but also on their entire family. 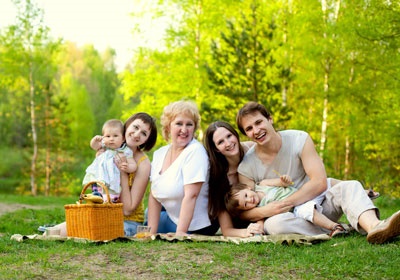 Passing it on. (iStock)

With colleagues from The University of York and the Norwegian School of Economics, we analysed data from more than 45,000 new mothers in Norway between 1997 and 2002.

This allowed an examination of how new mothers decide the number of hours to work in the first seven years after having a child.

The biggest effect is in the pre-school years. During that time, an increase of one hour in the time worked per week by a woman’s sisters and female cousins after childbirth corresponds to an increase of up to 30 minutes in the weekly hours that a new mother will work.

A tale of two women

Take two women who have the same work experience, have children at the same time and the same education.

If their sisters work very similar hours after having children, then they are likely to choose the same number of hours to work after returning from maternity leave.

However, if a policy increases the hours worked by one mother’s sister by, say 10 hours. Then this mother will work up to five hours more than the other, through the peer effect alone.

Before children are at school, which in Norway is at the age of six, the mother faces a balancing act: work to earn money, but use sometimes expensive childcare (depending on how deep the government’s pockets are at that moment) or save on childcare and spend time with her child.

Once the child starts school this trade-off is less important because earning income can coincide with the school day, and this is what the results show. So how does her family influence a mother’s decisions?

First, she might simply conform to the established family norms. Second, new mothers may find in their family a fantastic resource for information about what might be best for them and their child.

In particular, mums may seek reassurances about the effect that returning to work will have on their children from close relatives who have already been through something similar.

That might be anything from practical knowledge about childcare availability, to understanding how well children cope with the mum’s absence.

The research also asked why a mother might be swayed by her family’s choices of working hours in the years soon after having children.

The findings are that the hours worked by her family influence the mother right from the end of eligibility for maternity leave, up to the final pre-school years.

Mothers start to be motivated by the money their family earns only from age four onwards.

Why is this? Previous research has shown that the time mums spend with their children is highest for newborns and falls as children age, while the money spent on children starts off quite low and increases as they grow up.

And so the money earned by the family starts to influence decisions during the later pre-school years when more is spent on their children.

Of course, it may be that mothers are interested in the earnings of their family simply in order to keep pace with established patterns of spending.

If her family goes on a holiday, the mother might choose to work more hours to buy a holiday herself.

All developed countries have seen well-documented increases in the number of mothers returning to work after having children.

Recently, there has been an increase in hours worked.

In our paper, we show that in Norway between 1986 and 2010, the proportion of mothers working full-time rose from 60% to 76% for mothers with a degree and from 42% to 60% for mothers who went through compulsory schooling. This may be due to availability of childcare or there may be cultural changes involved. But what is clear from the new research is that public policy changes can create a social multiplier effect.

This means that any policy aimed at raising participation of mothers in the workforce by a single hour per week will actually raise labour supply of not just the targeted mothers but also of her family.

That effect we have shown, where one hour extra translates into an extra 30 minutes for fellow women in that family creates a cascade effect.

Other groups can create a supplementary effect too. Our research finds that choices made by neighbourhood friends will influence mothers, even if it is to a lesser degree.

An increase of an hour a week worked by neighbours will lead to an increase in the mother’s hours by between two and 17 minutes in the three to five years after having a child.

We can argue over whether our developed economies are best served by quickly pushing new mothers back to work, but what is clear is that a government which uses public policy to encourage new precedents to be established in families will end up reaping more than they thought they had sown.

Have you recently returned from maternity leave? What's your experience been like? Tell us by emailing to chatback@parent.com and we could publish them.

Subscribe to our weekly newsletter, and you'll receive Parent24 stories directly to your inbox.
We live in a world where facts and fiction get blurred
In times of uncertainty you need journalism you can trust. For 14 free days, you can have access to a world of in-depth analyses, investigative journalism, top opinions and a range of features. Journalism strengthens democracy. Invest in the future today. Thereafter you will be billed R75 per month. You can cancel anytime and if you cancel within 14 days you won't be billed.
Subscribe to News24
Related Links
Being a working mother is not bad for your children
Working moms: stop feeling guilty
So... you're "just a mom"
Next on Parent24
FEEL GOOD | 'I finally have my arms around my son': Mom reunites with her son after 40 years apart