'His heart stopped and it felt like mine had too': Read this couple's incredible journey to parenthood "We have been so blessed to see the goodness of people rallying around us."

Niki and Tony were like any other young couple back in 2007. As newlyweds who planned to have four kids, they had already settled on names, but waited until they were more ready to start their longed-for family.

This wait involuntarily became longer and longer, as they struggled with "unexplained infertility."

"It was a trying four years of fertility clinics, laparoscopy and every fertility test under the sun," Niki told Parent24. "There was no reason at all why we couldn't conceive."

"I remember every single month being totally convinced that I was pregnant and the devastating blow when my period arrived. It was over 48 months of emotional rollercoaster, fluctuating between extreme hope and utter disappointment."

Niki finally fell pregnant after a round of IVF, but then miscarried at 8 weeks. "I was broken inside and didn't even know it," she says. "I learnt first-hand what Proverbs 13:12 meant "Hope deferred makes the heart sick"."

No idea what was to come

With their marriage taking strain, Niki says they had no idea what was to come. But the Cape Town couple worked together, and six months later their tenacity was doubly rewarded when Niki fell pregnant with twins, thanks to IVF.

"We were giddy with excitement and couldn't wait to find out the sexes. I had to do all the foetal assessments because of my age, and those were so exciting for us as they just gave us more opportunities to bond with our babies," she says.

Honouring their heritage, they chose Greek names for the pigeon pair with Stelio, meaning 'Pillar of Strength' after Tony's late father, and Zopoula, meaning 'The Fountain that Gives Life' after Niki's mother.

Must read: Welcome to Holland – An essay for special needs families

Two of everything, except the cot

"The family was beyond ecstatic for us," Tony says. "Such joy! This was what the second part of that Proverb meant "But desire fulfilled is a tree of life."

Niki bought brand name baby clothes and two of everything, except the cot, where the couple planned on putting the twins together for the first few months, as was recommended.

A very specific stork party was planned: a champagne breakfast where both parents-to-be would celebrate together with all their family and friends. Two days before this special event, on 13 May 2013, Niki woke up at 2 am with lower back pain.

They went to the hospital, but by that stage Niki was experiencing full-blown contractions. "They gave me a drip to try to stop the contractions, but I was already 7cm dilated. I just remember our gynae telling me not to push while wheeling me into surgery, as Stelio would've just fallen out," she shared.

The weight of a packet of sugar

Stelio was delivered first, by emergency C-section. "I never got to see him or cuddle him. He was whisked to the other side of the room while the gynae was now struggling to get Zopi out from under my ribs," Niki recalls.

She says it appeared that Zopoula decided to kick her brother out for more room and then tuck herself away snuggly under her mother's ribcage.

"A further cut was made, vertically, to make what they term a classical Caesar (cut both horizontally and vertically), and little Zopi came out a few minutes later all bruised and battered," Niki says.

Stelio weighed 1kg and Zopoula weighed 900grams, the weight of a packet of sugar. 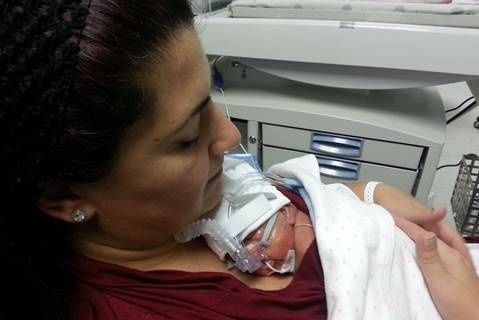 Science surely could make a plan

"I'm not sure at this point if it was the drugs that had me in la-la land or what, but I honestly believed the twins would be fine," Niki says.

"I mean it was 2013, for goodness sake, and we were just in the gynae's office 2 days prior with a raving review that even though they were 26 weeks, they were tracking to the size of 28 weekers. Science surely could make a plan."

Niki admits she was very far off the mark. Both babies were in critical condition and were immediately put on life support.

Niki herself needed medical care, and it was only 24 hours later that she saw them for the first time, each in their own open incubator with many pipes attached and a machine breathing for them.

"How do I let you go before I even got to know you?"

The very next day their paediatrician delivered a devastating message. Both babies had Grade 4 brain haemorrhages and were in critical condition. Tony explains how at this point, a government hospital would have switched off the machines, and the couple were told to seriously consider it. They decided to fight for their babies.

"We prayed God would heal them. That night we had close family and friends come join us at the hospital in prayer for a miracle."

However, in the early hours of the next morning, the doctor delivered another excruciating message.

"Stelio had passed away, his heart stopped and it felt like mine had too," Niki describes. "That was the first and last time I got to hold my son."

"He was perfect in every way. He looked just like Tony, had his legs, his feet, his body shape and his face. My precious boy, how did this happen? How do I let you go before I even got to know you?"

No time to mourn

"Stelio took our broken hearts with him, but there was no time to mourn as Zopoula was in critical condition. Her organs were failing, and she had septicaemia. We clung to Psalm 118vs17 "I will not die, but live and proclaim what the Lord has done."

One of many miracles

Zopoula spent the next 168 days on life support in the NICU, and with the help of an Oscillator, CPAP and Nasal Prongs she fought for her life.  She endured laser eye surgery, multiple brain shunt operations and g-tube/peg operations, a ventriculostomy and several bouts of bronchitis and pneumonia.

Niki remembers when Zopoula's kidneys started working again as one of many miracles. Despite all these interventions, Zopoula started having devastating seizures. Her official diagnosis is Spastic Quadriplegic Cerebral Palsy, with Epilepsy, Cortical Visual Impairment, and Global Developmental Delay. A zest for life

"What that means is she cannot walk, talk or eat by herself and it is unsure as to what she can see," Niki explains. "But her challenges, whether physical or cognitive, have never dampened her spirit."

"She truly does have a zest for life and conquers each hardship with tenacity and courage. She has taught us so much - mostly to smile through the greatest adversity."

"All you need to see is that one smile and you can't help but love her. She is warm, gentle, loving and cheeky too. Oh, and let's not forget, feisty!" Niki says.

"I suppose that is the very quality that keeps her pushing through those near shaves with death."

The goodness of people rallying around us

"The last 6 years have been no walk in the park with Zopoula fighting for her life and the reality of life with a special needs child, but I have to say through it all we have been so blessed to see the goodness of people rallying around us," Niki says.

While the couple's medical aid covers the mainstream therapies like physio and OT, the vast majority of costs are funded by the family.

"We had to start fundraising for the big equipment, but just could not wrap our heads around the idea of asking people for money. Our family and friends have jumped in and carried us at times when we have felt like we were drowning. That, with our faith in God has been our saving grace."

"A Greek word best describes the feeling is philotimo: to honour your friend. It means living your life with virtue – in love with the world around you and your fellow human beings. We have certainly felt the philotimo tangibly."

Niki says the family is so grateful for all the support from family, friends, community and even strangers who have come through for them. "We wouldn't have been able to provide Zopoula with the quality of life she has without their effort, support and love," she stresses. The story doesn't end there. "We miraculously, truly miraculously, as I was over 40, overweight, overtired and way overstressed and let's not mention the rest, fell pregnant in 2015," Niki says.

She carried to 37 weeks and gave birth to a healthy 3.85kg baby girl on 15 January 2016. The couple named her Styliani, the female version of Stelio, in honour of her grandfather and brother.

"Styliani looks just like Stelio did and I believe she is God's gift to me, to let me see what Stelio looks like. I've caught Tony leaning over the crib whispering to Styliani "Stelio sent you, didn't he?"

Styliani knows no other way. "Having a nonverbal, physically and cognitively challenged big sister is her normal," Niki says.

"She is very sweet with her and sometimes Zopoula even gets irritated with Styliani's affections."

"On the rare occasion we get to go on a family outing, Styliani gets so excited. Without fail she asks "Is my sister coming with?" And then when we're out, she's so proud to tell strangers that Zopoula is her sister."

A new way of thinking

2018 was rough. Zopoula hospitalised 9 times, including on Christmas day, but now the family has embarked on a new way of thinking: preventative therapy. "We do weekly chest physio and paediatrician visits," Niki explains.

"This helps us nip sickness in the bud and lessen chances of pneumonia and hospital. Our hope for this year is to keep Zopoula out of hospital as much as possible, so she will be able to progress," she says.

They also try all available therapies and interventions, such as hydrotherapy, playschool, physio and the latest equipment.

And showing progress she is, such as sitting independently.

"Not for very long periods," Niki says, "but anything over blocks of 10 seconds is huge. She has recently started hydrotherapy and is loving the movement."

The next step is to buy a standing frame, to help improve her weight-bearing ability and to get her out of her wheelchair for intermittent periods. "The one she needs is not standard, so it costs more, as it needs to accommodate her shallow hip sockets - her hips can dislocate easily, causing extreme pain."

The family has created a BackaBuddy campaign to help raise funds for Zopoula's much needed Standing Frame, which costs approximately R 50 000, to aid in her mobility as well as her on-going treatments.

Zopoula's journey is far from over, and if you'd like to keep up with her visit Zopoula's Zest For Life on Facebook.

Share your inspiring story with us, and we could publish it. Anonymous contributions are always welcome.

When you have a child living with disability

We live in a world where facts and fiction get blurred
In times of uncertainty you need journalism you can trust. For 14 free days, you can have access to a world of in-depth analyses, investigative journalism, top opinions and a range of features. Journalism strengthens democracy. Invest in the future today. Thereafter you will be billed R75 per month. You can cancel anytime and if you cancel within 14 days you won't be billed.
Subscribe to News24
Related Links
Welcome to Holland – An essay for special needs families
Selfless pensioners dedicate lives to adopted disabled boy
Photographer makes special needs children’s dreams come true in adorable photo shoot
Next on Parent24
#NoOneWins: Everything you need to know about Parental Alienation

Read more on:
birth stories
Events
Locals encouraged to tell their homegrown stories to ignite a love for reading