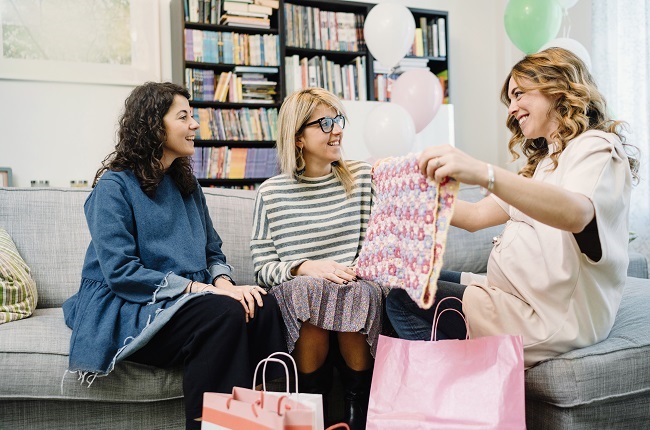 "Thank you, but I am not pregnant quite yet; but it is always good to be prepared for when the time comes." Photo: Getty Images

Have you ever had a bizarre experience at work with weird colleagues? Even if you have, we at Parent24 don't think it can compare to what this woman experienced.

A woman recently wrote on Reddit asking for a bit of advice about a gift she brought to a baby shower she was invited to.

Strugglinganonfem11 shared that she works at a popular clothing retailer, and she enjoys her work. 'My co-workers are great... but one co-worker (let us call her Rhonda) has been making my work life a living hell recently," she explained.

She described how she has worked with Rhonda for many years and would even consider her a work friend. However, things became weird when Rhonda invited her to her daughter's baby shower.

"What I did not know was this was not a regular baby shower… I arrived with a gift and was talking to my other co-workers that were there, and we figured out none of us had met the daughter."

Finally, Rhonda introduced her daughter to the group of co-workers who thanked them for coming to her baby shower before adding "I am not pregnant quite yet; but it is always good to be prepared for when the time comes."

Strugglinganonfem11 said that she became visibly confused, which then seemed to upset Rhonda's daughter.

Read: Cheating dad names daughter after his mistress to cover up his affair

Not a regular baby shower

After Rhonda's daughter had left, one of the colleagues explained that Rhonda told her when they arrived that this is not a regular baby shower and that she did this because her daughter had been feeling down since a few of her friends had been pregnant.

Rhonda then explained that "the physical invitations explained it was a party for her daughter to shower her with love."

Unfortunately, none of Rhonda's co-workers received a physical invitation.

Strugglinganonfem11 asked if she could take back the gift she had brought, but Rhonda told her that it would be rude to take back a gift after giving it. Rhonda added that her daughter was going through a lot and was looking forward to opening the gifts.

"Rhonda is threatening to go to HR if I don’t return the gifts, and buy something else off the registry (most the items on the registry aren’t even for babies) for the suffering I’ve caused", Strugglinganonfem11 wrote, asking if she was in the wrong.

The majority of comments supported her, with one poster writing "Wtf is a baby shower without a baby... she just wants free sh*t for no reason?" and another adding that the whole event was "whackadoodle" and "sketchy" and the woman asking for non-baby items on is "absolutely shaking down people".

Another poster wrote "Imagine how desperate for attention one has to be to have a pity party with your mom’s coworkers. Does daughter have zero friends?"

Have you ever heard of a baby shower being held for a woman who wasn't pregnant?

We live in a world where facts and fiction get blurred
In times of uncertainty you need journalism you can trust. For only R75 per month, you have access to a world of in-depth analyses, investigative journalism, top opinions and a range of features. Journalism strengthens democracy. Invest in the future today.
Subscribe to News24
Next on Parent24
OPINION | 'Our appeal is for the sake of our children's future': CEO calls for urgent intervention

Read more on:
baby showerfamilyparenting
Events
WATCH | 'He died at the school': Local experts unpack the issue of school bullying