Shouting at kids is not effective discipline. Here's what to do instead 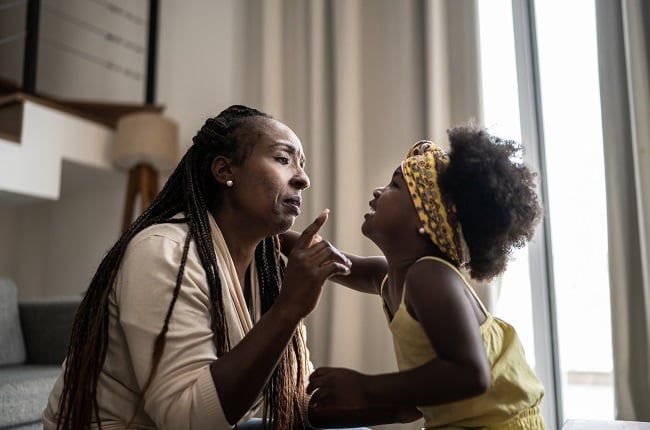 Shouting is not an active ingredient of effective discipline. Do this instead. Photo: Getty Images.

As much as we try to stay calm and be reasonable when our children misbehave, every parent knows that there comes a point when we lose it, and resort to that trusty old discipline tool: shouting. If this is you, you're not alone.

Shouting and scolding children is possibly the most commonly used discipline method worldwide, although there is no evidence that it works, says local mom, ex-teacher and school counsellor Karen Quail.

Quail, who now works independently coaching and running Peace Discipline workshops for parents, teachers, and others who want non-violent alternatives for raising their children, says that shouting and scolding are not active ingredients of effective discipline.

She says that shouting is one of those things that people hammer away with, as American psychologist Abraham Maslow shares, "when the only tool we have is a hammer, we tend to treat everything as if it's a nail".

People worldwide shout at their children to try and get them to cooperate, and get the results they want regarding their child's behaviour. However, it is rare that they stop and check if this disciplining tool is effective or not.

Read: What's the harm in spoiling your kids a little? Find out here

Why is it wrong to shout?

According to Quail, shouting is ineffective. She says that shouting is aggressive, it works you up and stresses everybody out for nothing.

If we want children to feel safe with us and then we shout at them, it's going to be counterproductive. "Shouting shows the child that you've lost control, which doesn't help them trust you more, and it doesn't help them feel contained by you. Instead, it makes them feel that this teacher or parent can't handle their behaviour," says Quail.

Quail stresses that what is important here is to recognise that this is not helpful to your discipline goals and is not good for your relationship with the child.

"When we do something that is not good for our relationship with a child, what we need to do is repair things by apologising to the child," she explains. "You might say: When you did x I needed to stop you, but I didn't need to shout at you and I'm sorry for that."

Quail says that if you find yourself shouting, look at why that's happening, and spend some time thinking about what you could do next time you feel like shouting.

What can we do instead?

"Give clear direction," says Quail. You may even need to give that direction in a big voice.

"But there's a huge difference between hearing your teacher say calmly but loudly enough to be heard over the noise of the class, 'Let's all be quiet', and something shouted angrily like, 'Shut up and sit down and keep quiet!' 'How many times must I tell you that you are too noisy?'" To hear the difference in tone of voice, watch the video below.

In the first example, she says, you hear this rather loud but authoritative voice, but it doesn't sound like the teacher is out of control.

In the second, it sounds like the teacher is losing it, and the message the children are getting is: "This teacher does not know how to manage our class."

Off the table now

Another example of giving clear direction that Quail shares:"One day, I was looking after some small children in the aftercare, three to six-year-olds and one little girl just suddenly jumped on the table, which is not allowed, and her friend joined her. I remember saying  in a firm voice,'Off the table, now!"

Quail says this is much more effective than angrily shouting, "What are you doing on the table? You know you're not supposed to be on the table! Get off the table!" as this would communicate a lot of distress on her part, without giving clear direction about what to do till the last sentence. Again, to hear the difference in tone of voice, watch the video below.

She reminds us that research has shown that longer reprimands are less effective than short reprimands because when she said, "Off the table, now", the two kids immediately jumped off the table.

Must read: Having twins or triplets can increase the risk of postpartum depression

An important thing to remember when disciplining your child, according to Quail, is to focus on the "do" of the situation rather than the "don't".

When you focus on what the child must not do, you remind them to think about it, keeping the picture of the wrong behaviour in their mind. Instead, help them learn the right behaviour, by communicating clearly what you want them to do in a calm voice.

"Perhaps your child is opening the cupboard door and closing it again, banging the door, and banging the door repeatedly to see how it works maybe, and the sound of that is just driving you nuts," says Quail.

In a situation like that, instead of shouting:, "Would you stop doing that?" - she suggests that you could step in and distract them:  show them something else, start a fun game, or start telling them a story.

Also read: Tantrums or growing pains? There’s much more to toddler troubles than you might think

Another strategy that Quail suggests, for example when getting multiple children between ages 3 and 6 to settle down at nap time. Instead of saying something like "Stop wiggling! Lie still!" to say, "Look at Buhle, she is lying so nicely. Oh wow, look at Jade; she's lying so still and quietly."

"Again, I would do this in a calm, soft voice. The voice the teacher or parent uses often affects the energy of the situation: whether it hypes things up and escalates things, or whether it calms things down. So, don't use a shouty voice," advises Quail.

Another effective way of dealing with children without shouting, according to Quail, would be to give them a timeout. A good way to do this is to give a timeout from the specific thing that the child is not managing.

"You might insist that they play inside for a while if they were causing havoc on the playground, or you might temporarily remove a toy which they are using to be destructive, or perhaps you'll stop two children from playing with each other for a short while because they're becoming aggressive with each other."

"In each of these cases, you're giving them a timeout from the thing they're not handling. This immediately interrupts the problem behaviour, and again there's no need to shout here because the active ingredient, in this case, is the timeout," adds Quail.

Also see: 'Children remodel what adults do': Expert urges parents to be mindful of how they speak to each other

The message you are sending to them

She says that when children have done something wrong and you start shouting at them, you are taking the focus off what you're trying to teach them. Her suggestion is to go in with a calm, normal voice, or an authoritative but not out of control voice.

Now you might ask, what if the child has already done something wrong, and it's too late to stop them in the middle of it, like with a timeout?

"The temptation here is to shout at them about what they've done wrong, tell them why it was wrong, and go on and on about it, but this does nothing to remedy the situation. I would suggest that if the child's already done something that hugely inconvenienced you or hurt somebody else, that after perhaps removing them from the situation and letting things cool down, you direct them into making amends," explains Quail.

"Think of some restorative action," she says. "Perhaps a kind deed they could do for the person they wronged."

This is a much more effective way to teach children to respect others than act disrespectfully yourself by shouting at someone, she says.

Watch the video below for more information about shouting and what to do instead: