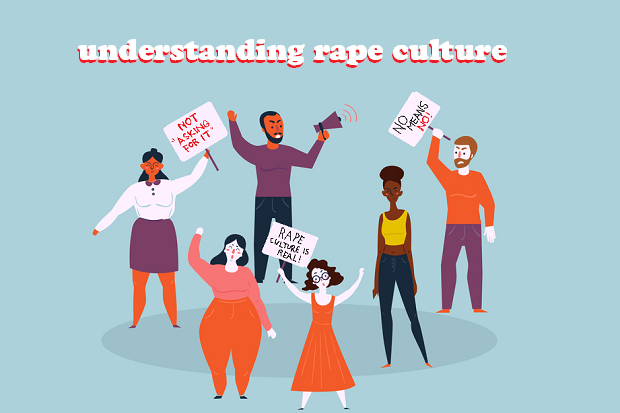 Disclaimer: While this article focuses more on rape culture relating to women at the hands of heterosexual-cisgender men, we do acknowledge that rape culture affects EVERYONE.

The South African rape and gender-based violence crisis is something we need to address every chance we get. As parents, it is crucial that we do some introspection and discuss topics of rape culture with our children so they know right from wrong and never become a part of this devastation.

There seems to be a lot of misconception about 'rape culture' and what it entails. Many see it as a mere feminist buzzword thrown around when discussing rape and all forms of gender-based violence. But it goes far beyond that, perhaps further than you may have realised.

With the South African rape and gender-based violence crisis getting worse by the day, it certainly is something that needs to be discussed more. Especially as a parent, it is our responsibility to teach our children right from wrong so that they themselves do not perpetuate such a sickening problem.

Perhaps we are guilty of perpetuating rape culture without even realising it, but as Ice Cube, the wise, once said, "Check yo self before you wreck yo self."

So, what is rape culture?

Rape culture refers to the normalisation of rape, sexual assault or harassment that may be implicit or explicit. It is the pervasiveness of rape to the point that it is so normalised, it becomes a societal “culture” and is prevalent in our everyday lives. It is often the result of generalised ideas of gender and sexuality stemming from patriarchy.

Rape culture ranges from things that seem “normal” to those that are more blatantly and explicitly violent.

Here are some of the points covered in the 'Rape culture pyramid' by The 11th principle: consent! and in certain instances, why they are considered part of rape culture:

Level 1: Normalisation (the bottom of the pyramid)

Each of the issues refer to things that people generally find acceptable, harmless or fail to see how it plays a part in rape culture.

Rape is an extremely serious issue that should NEVER, UNDER ANY CIRCUMSTANCES BE JOKED ABOUT OR TRIVIALISED.

Saying things like, “that maths paper raped me” or “Arsenal raped United this weekend” is not okay! The English language is pretty extensive, find another word to use.

“Boys will be boys”

This is the attitude that boys can do things that are violating, cause discomfort or perpetuate rape culture because “it’s what boys do” or it is "an expression of their masculinity". This becomes dangerous as it makes them think it is okay to do these things, and so it continues.

“Girls should stay at home”

Having the attitude that you need to police girls’ behaviour so that they do not get harmed, and blaming girls for “leading boys to it”, but never condemning boys for their actions.

Normalising sexist attitudes and passing it along to your children will only make them contribute towards the problem.

Unequal pay for the same job is deeply rooted in a patriarchal society that places men above women and further adds to the idea that men are controlling women.

What may seem like harmless "boy talk" can be disrespectful and violating since many of the discussions involve degrading comments about sexual experiences with women or their sexual history.

Blaming a victim of rape, sexual harassment or violence or misconduct for what happened to them takes the guilt away from the perpetrator and shames the victim. It is the reason so many victims are afraid to speak up.

Absolutely nothing is an invitation to be raped.

The following issues threaten the dignity of victims and cause degradation, disrespect and violation.

Online sexual harassment could present itself in many ways, from begging for pictures, vile comments or incessant messaging to sharing someone's private information.

Sexual objectification means simply viewing someone as a sexual object and only for your gaze. It means stripping their dignity and only considering them sexually desirable.

Not only is this dangerous, it is a complete invasion of privacy and can (and should) lead to legal action.

Condemning women for doing the same things that men are praised for is rape culture. Slut shaming is denouncing a woman for dressing or behaving a certain way that you do not consider "appropriate" for a woman. It also means shaming women for being sexually liberated.

This is extremely common and degrading, invasive and makes one feel like a "piece of meat". What’s particularly disgusting is that when victims call out cat-callers, they’re often told they are “overreacting”!

NO ONE IS ENTITLED TO YOUR BODY.

"Up-the-skirt photos" are an example of this. Snapping pictures of people without their consent is not okay.

Non-consensual nude photos are a violation. Teach your kids to never send nudies of themselves to others, whether they were asked to or not.

This refers to the acts that place the victim in a position where they are no longer in control, or infringe on their freedom.

Forcefully convincing or trying to convince someone to perform sexual acts with you, even though they have expressed discomfort.

Grabbing or touching someone’s body without their consent is a big no-no.

If you establish a “safe word” when engaging in sexual activities with someone, and they then don't take it seriously and don't stop when you use the safe word, makes the sexual encounter non-consensual.

"Covert condom removal" is essentially removing the condom without consent during sexual intercourse. It's a big violation plus it can lead to pregnancy and STIs.

Threatening to harm someone (physically, reputation- or career-wise, etc) if they deny or reject your sexual advances.

This refers to feeding someone drugs or harmful substances without their knowledge.

The following are explicitly violent acts.

Always remember that consent can be revoked even once it was given. Without consent, it is rape! No matter what the situation may be.

Do you teach your children about rape culture? What are some of the things you discuss? Let us know and we could publish your comment. Do let us know if you'd like to remain anonymous.