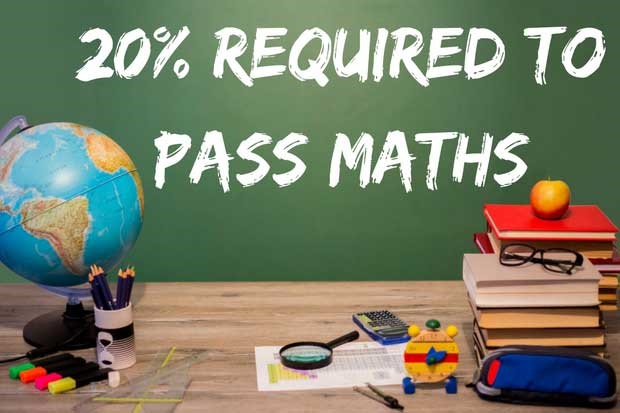 After hearing about the education department dropping the mathematics pass percentage, Parent24 published the article Pressured South African schools had no choice but to relax maths pass mark.

Readers have their say about the topic:

Stop forcing them to do maths:

Erich Niemand says: "Why don't they just stop forcing students to take maths? This way students not meant to be in the classes will not be there, thus alleviating the teachers problems as they will be left with student who are willing and more importantly able to do the work."

Karien van Zyl says: "To know only 20 % of your work is a laughing matter to say the least.

"In this case I would say rather do away with maths being a mandatory subject, allowing a kid to get 20 % for any subject just does not make sense.  A kid could have taken a different subject that they love.

"Currently they have to take 4 mandatory subjects and only choose 3 additional subjects to further their education. That is not a lot to go by if you have plans for the future.

"When I was in high school 1984 to 1988, only 2 subjects were mandatory and we were allow to choose 4 subject to further our education.

"By forcing kids to take maths put unnecessary pressure on them and the parents. This normally result in a large percentage of kids take extra maths classes to cope where they could have invest their time and energy into another subject that they love."

One reader says: "I am out of high school for one year. Not a parent yet.

"I was also the maths "struggler" in high school. I did CAPS before my sporting commitment gave the once in a life time opportunity to study at a private school which does a UK curriculum ranked at one of the top three in the world - Cambridge (CIE).

"My maths marks were a push for 40% in CAPS. My maths has always been poor, even with CAPS, but the change of curriculum to CIE worked for me.

"I managed to come out in matric with maths marks of 65% in (IGCSE) which is equivalent to CAPS'matric standard and 58% in advanced subsidiary (AS) level.

"I believe SA and the department of education must stop aiming low and challenge the kids with the international level of education, like Cambridge.

"If Zimbabwe can afford it, how come SA can't? Those are the questions I ask myself every single day.

"I hope one day I can get a chance to give my knowledge back. SA, we are settling with meritocracy. We have accepted and embraced it.

"You can't get a doctor out of a 20% maths mark, but the only thing you can get is a car guard, counting his tips.

"If we want to produce car guards, then 20% is a go, but this economy will never grow. It's already running backwards, but now we want to worsen things by dropping the standards.

"In my personal opinion, CAPS must be dropped and CIE or IB should be adopted. Maths is vital. It's imperative that we don't drop the maths mark, but drop CAPE in order to build a productive SA economy.

"What are the trying to tell the children? That it's okay to get a low achievement? This will apply in life too.

"Sorry, but our teachers need to go back to school and study maths. We need Indian teachers to teach maths, because they are the best at it."

Bring older teachers out of retirement?

"Our kids are being taught by foreign teachers who can't explain well in the mother tongue. Stop the policy that doesn't employ retire mathematics teachers, especially in Limpopo."

"I'm an experienced maths teacher with strong teaching methodology skills, but because I'm 78, still fit and healthy, I cannot find a teaching position in Johannesburg or Pretoria area.

"I've experienced the poor mathematics taught in the primary school when I was head of mathematics in a high/primary double medium school.

"The grade 7 maths teacher's lack of mathematical knowledge was shocking. Now, at my age, where I can still deliver a valuable service, especially to grade 4 up to at least grade 10, and even grade 11 and 12 maths literacy, I am considered too old.

"So, instead of being part of the solution, I am shunned because of age. There must be many ex-maths teachers, like myself, still capable of teaching, but "too old".

"Please can we get the administration to function properly? Start by putting in place proper structures and the appointment of 'right' people for the job - this would seem to be the obvious first."

We'll be letting ourselves down as a country.

"Maths in the old days was not required to survive in the world - true - as long as you were not pursuing a career in engineering, mechanics, accounting, teaching, etc.

"Maths is fundamental to succeed in those careers. Do you want an engineer with 20% maths knowledge responsible to discover our new energy sources, responsible for designing our homes / vehicles, etc.

"Are we not setting ourselves up for failure here? What is our expectation for the future of this country?

"We, as individuals, should expect better for ourselves. Are we not encouraging our kids to strive for excellence? At the rate we're going, we are going to sit with doctors, lawyers, etc. with 20% knowledge in their respective fields.

"Are we really not going to expose ourselves to that or are we going to import those skills? Our democracy is in its adulthood - we can't make excuses anymore - let's strive for more and not less.

"We will let ourselves down as a country."

Destroying the future of millions of young pupils.

"20% Pass rate for mathematics is by all means destroying the future of millions of young pupils because what can you do with a 20% pass rate of mathematics?

"The education system has failed our country even more by this step they have taken, because by decreasing the pass rate to 20% it simply means they do not care about the futures of us, the young people, and most importantly, the future of South Africa.

"Children were proud of passing with a 40% in mathematics and it saddens me to imagine how they will be with a 20% pass rate.

"Parent should by no means tolerate and be proud of their children who'll come home with a 20% pass rate, because if they do then they will be proud of an uneducated generation of young people of tomorrow.

"Instead, very strict laws on education have to be formed to push the pupils for a better future of great marks because if pupils are already comfortable with 40%, then what won't make them feel comfortable with 20%?"

"I am one of those people who dropped maths in old standard eight, as I wanted to go to university, I already had a third language and knew that I would never pass matric maths.

"I qualified as a teacher, but later switched to nursing. Neither of these required maths in the 1960s.

"I am now retired, but still nursing. Maths is only necessary for certain careers and forcing students to pass it is ridiculous!

"If I were leaving school now, I would not have been able to pursue either of my careers! I might add that I was a good teacher and am an even better nurse!"

"Why bother with any maths at all?! I firmly believe that if you consider assessing pupils by testing them then ONLY a 50% mark should be considered a pass. If you don't know or understand this at least, then new work will not be sufficiently understood and the pupil will gradually fall short of the required pass mark in subsequent grades.

"I have just read Sarah Muller's interesting article on mathematics learning (or not) in South African schools.

"This article is so relevant to much of the disaster of education in so many schools in our country and I applaud the thought that has gone into Ms Muller's writing.

"As a retired teacher, I have watched with horror what is happening in so many schools, and the mathematics situation in particular. And I have wondered why it is of such importance that EVERY child has to take the subject from grade one to matric?

"And then there is the farce of passing children who know that they haven't passed - and spending hours trying to find a mark or two, here and there in order to justify the farce.

"In my day, a long time ago to be sure, we learned arithmetic at primary school and graduated to mathematics only in the second half of secondary school.

"Arithmetic is the study of numbers and is essential to anyone who has to deal with numbers in any way, and that is all of us, for whatever reason.

"Mathematics is the study of the abstract concepts of numbers and is, surely, relevant only to those who choose to delve into the theoretical aspect of study.

"I have no doubt that mathematics is essential in the study of medicine, architecture, physical science, etcetera, but for the ordinary man in the street, this study is irrelevant.

"Just semantics, one might say, but it is real!"

"I taught English and the mention of Shakespeare or poetry often invoked the same response as mathematics does - it's hard! Even before one has read one word or tried one theorem.

"Why are little children learning maths? It's just showing-off to call a times table maths. We learned our times tables by rote and could still rattle them off years later, they were useful and still are.

"But the mathematics I learned at school has long since gone and not been missed at all. And the same applies to many millions of other 'ordinary' people.

"This is a subject that has concerned me for a long time as I worry about the state of education and the lack of ability by many of the teachers who have never been trained to cope with the changed syllabi and who, as a result, will feign illness rather than admit their incompetence; who will blame the children rather than themselves and who cannot be blamed for much of their failure.

"Bring back arithmetic in the primary schools and give the teachers thorough training in that and stop the nonsense of mathematics for all."

What do you think about what these readers have said? Do you agree, do you disagree, what are your thoughts on the matter? Share your opinion by emailing chatback@parent24.com and we may publish your story. Should you wish to remain anonymous, please let us know.

We live in a world where facts and fiction get blurred
In times of uncertainty you need journalism you can trust. For only R75 per month, you have access to a world of in-depth analyses, investigative journalism, top opinions and a range of features. Journalism strengthens democracy. Invest in the future today.
Subscribe to News24
Related Links
Why it doesn't help - and may harm - to fail pupils with poor maths marks
Teaching maths: what works?
Help your child succeed with maths
Next on Parent24
Sign up now and get a head start on Matric exam prep